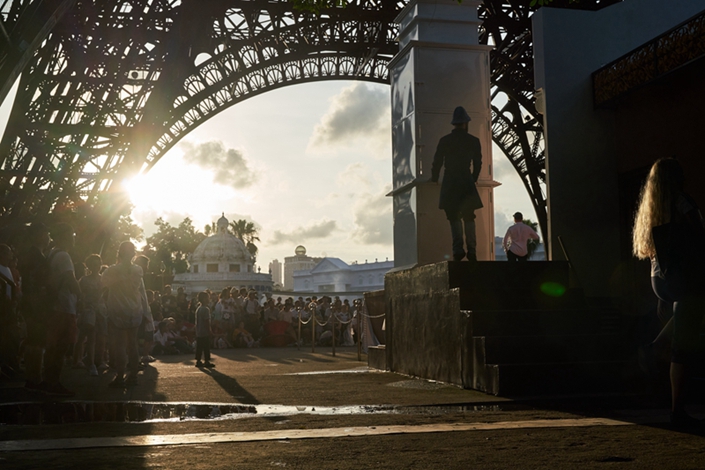 A dancer from Georgia prepares to stage a performance under the shadow of a mock Eiffel Tower at the Window of the World, a theme park in Shenzhen featuring replicas of international tourist attractions. Employees are expected to perform a variety of dances from different cultures a few times a day. Photo: Liang Yingfei/Caixin

As the Chinese economy began to boom in the 1990s, a wave of globalization swept across the country spawning a parallel craze for exotic European attractions.

Few Chinese people were able to venture overseas at that time.

So developers rushed to create “small worlds,” miniature villages and theme parks that copied iconic European landmarks and architecture, right down to minute details on lampposts and ceilings.

Meanwhile, at malls and hotels around the nation, staff dressed in European clothing and faux-European names and architectural styles became a common sight.

But in the decades since, dwindling domestic tourist numbers and changing consumer tastes have left many of these parks neglected as China’s growing middle class gained the means to travel abroad and experience the real deal.

Window of the World in Shenzhen was one of the first parks of its kind to open to visitors in 1994. But today, its mini Manhattan attraction lies dilapidated after years of neglect.

While theme parks are no longer popular, foreign-style towns have sprouted up in recent years.

Around the southern Chinese cities of Guangzhou and Shenzhen alone, scores of such “replica towns” have been built, touting the appeal of “travelling without leaving home,” in an effort to attract tenants and tourists to work, live and shop.

But the success of some has been underwhelming.

At a popular replica town in Shenzhen named after the Interlaken, a resort town near the Swiss alps, deserted European-style cabins line the main shopping boulevard, and signs advertising Chinese beef cubes, hotpot and barbecue hang on their side.

Staff members there told Caixin that the shops had been closed since the Lunar New Year festival.

A castle-like structure imitating the Victoria Jungfrau, a renowned hotel in the Swiss town, is also boarded up, despite being billed as the main attraction.

A sign advertises that it is for rent, and a recent occupant of the building, a dentist, has just moved out.

Employees here take the opportunity to earn some extra cash by ferrying tourists around the town, which opened in 2007, after work.

Despite having worked there for more than a decade, one employee tolf Caixin they only take home a salary of 3,000 yuan ($361) each month — barely enough for three nights’ stay.

“Business has been really bad this year, perhaps because of the bad economy,” she said. “I hope this job can sustain me until I retire.”

As visitor numbers drop, park operators are pulling out all stops to attract business, with some putting on performances and opening European-themed stores, and others launching large-scale revamps.

In a nation where income inequality as measured by the Gini coefficient is now among the highest in the world, there are still a sizeable number of locals who are interested in such attractions.

A Shenzhen native who previously visited the Interlaken said that the town is popular with her Chinese friends, especially the older generation who are more than happy to leave with a few quick snaps as mementos.

But it’s a different story for her, having lived in Europe for four years.

“Maybe I’m an exception, but I feel really awkward when I visit the place. No matter how close the replicas are to the real thing, I still feel like I’m in China,” she said.

Others are less concerned. Two girls who were visiting another “copycat” theme park during their summer vacation said their motivation was simple: “Because the pictures we take here are great!”