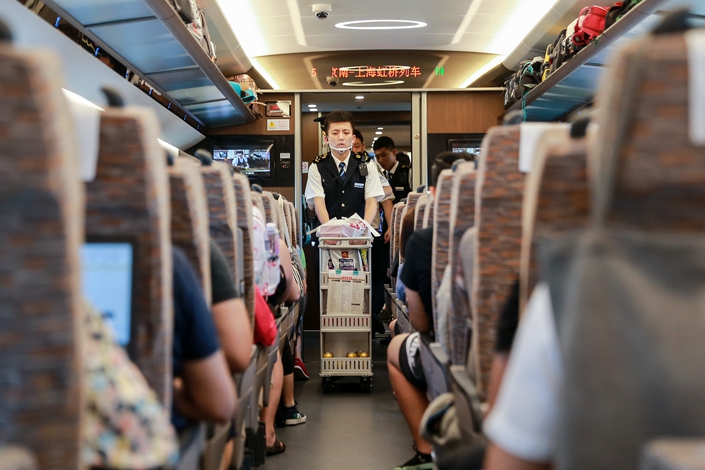 The Caixin China General Services Business Activity Index, which provides a snapshot of operating conditions in the country’s services sector, edged down to 51.6 in July from 52 in the previous month. A reading above 50 indicates expansion, while anything below that signals a contraction.

The Caixin China Composite Output Index, which covers both manufacturers and services providers, inched up to 50.9 in July from 50.6 in the month before, thanks to a broad stabilization in the manufacturing sector.

“In general, China’s economy showed signs of recovery in July, thanks to large-scale tax and fee cuts, as well as ongoing support from monetary policy and government-driven infrastructure investment,” said Zhong Zhengsheng, director of macroeconomic analysis at CEBM Group, an affiliate of Caixin Global.

While total new business received by services providers grew at a slower pace in July, the gauge for new export business began expanding again and hit the highest level in three months due to strong demand across international markets, according to the survey.

The gauge tracking employment in the services sector remained in positive territory, inching up to a three-month high, with some companies linking the growth to increasing business requirements, the survey said.

Services providers’ input costs and the prices they charged rose at a faster clip in July, the survey showed.

The measure for business activity expectations didn’t change from the previous month, remaining in positive territory, but “the overall level of positive sentiment was among the weakest in the series history,” the survey said.

“It remains to be seen if the economic recovery can continue amid trade fictions with the U.S.,” Zhong said.

The outlook for the trade war between the world’s two largest economies remains gloomy. On Thursday, U.S. President Donald Trump said in a tweet that next month he would impose an additional 10% tariff on an additional $300 billion of Chinese goods. The threat came just as Chinese and American trade negotiators concluded another round of high-level talks earlier this week, laying plans to maintain intensive consultation.

China’s policymakers are counting on the services sector to create jobs, though multiple economists say it has been hit by the trade war along with an economic slowdown. At the end of last year, the sector contributed 46.3% of the country’s total employment, government data show (link in Chinese).

The services sector, also known as the tertiary sector, includes finance, real estate services, marketing, transportation and retailing. In the first half of this year, the sector accounted for nearly 55% (link in Chinese) of China’s gross domestic product.