By Matthew Walsh and Du Caicai 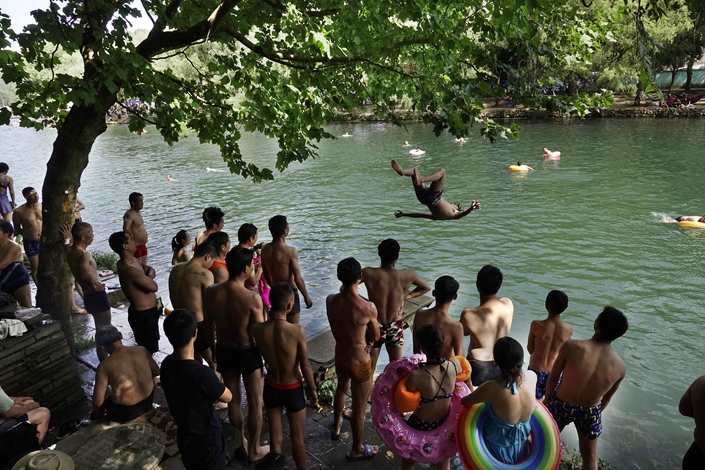 Tourists cool off at a park in Guiyang, Southwest China's Guizhou province on July 28. Photo: VCG

Heat waves like those that scorched much of China last month will soon be the “new normal,” a respected climate scientist has warned, as evidence mounts that climate change could lead to tens of thousands of extra deaths in the country each year.

“Future predictions indicate that by around 2030 or 2035, every summer will be dominated by heat waves,” Ding Yihui, a climate change special adviser at the China Meterological Association (CMA) and a member of the influential Chinese Academy of Engineering, said Sunday at an event in the southwestern city of Chongqing.

Ding was addressing China and the global community’s ability to adapt to the impacts of climate change. Increasingly frequent heat waves are just one result of the phenomenon, he warned, citing the risks to food security and rising incidences of other extreme weather events such as typhoons and rainstorms.

Ding’s remarks came as China cools off after a spate of soaring July temperatures, with weather stations across northern and southern parts of the country registering in excess of 35 degrees Celsius (95 degrees Fahrenheit) and some posting record-smashing highs. China officially defines a “heat wave” as a run of three consecutive days when the average high is above 35 C and the average low above 25 C.

Similar weather has affected much of the northern hemisphere, with several European countries chalking up record-breaking temperatures. The average surface temperature of the Earth in June was the highest for that one-month period in recorded history, according to the U.S. National Centers for Environmental Information.

China’s size, weather system diversity, and the lack of historical data can frustrate long-term climate analysis. But it is clear that the country has seen a significant increase in the number of heat waves since 1980. During a similarly scorching July last year, China sweltered in average temperatures exceeding 35 C for a total of 6.1 days, 2.1 days more than the recent average, according to the CMA.

Global heating is likely to have particularly dire consequences for China, where surface air temperatures have risen faster than the global average, scientists say. Scientists have projected that in coming years, rising temperatures could lead to tens of thousands of premature deaths there annually, even when less severe winters are factored in.

A study published Tuesday in the peer-reviewed journal Nature Communications suggests that, even taking into account the human capacity to adapt to climate change, global warming of a couple of degrees above pre-industrial levels would lead to tens of thousands of additional deaths in China each year. The researchers found global warming of just 2 C instead of 1.5 C would lead to 28,000 extra deaths each year.

The long-term prognosis is even worse. Last year, another paper published in Nature Communications said that under the “business-as-usual” approach to greenhouse gas emissions, by 2070 the North China Plain — a heavily farmed region spanning some 400,000 square kilometers (154,440 square miles) and home to about 400 million people — may suffer lethal combinations of heat and humidity “exceeding the threshold defining what Chinese farmers may tolerate while working outdoors.”

As climate change intensifies, the frequency and extent of heat waves is on track to increase further, creating serious health and environmental impacts, said Liu Junyan, a climate and energy campaigner at Greenpeace East Asia who was not involved in either study.

Average annual temperatures in some parts of western China have already risen by 3 C, Liu told Caixin in an email, adding that many of the country’s more than 50,000 glaciers — which supply water to hundreds of millions of people in Asia — are on track to disappear by 2100.

“Climate change isn’t a far-off problem. It’s impacting our health and economy, and we can’t afford to continue to delay the urgent action that is needed,” Liu said. “We need to tackle the problem at the source, by moving away from coal and other fossil fuels as quickly as possible. At the same time, much more attention must be paid to monitoring the impacts of climate change and adapting to avoid the worst consequences.”