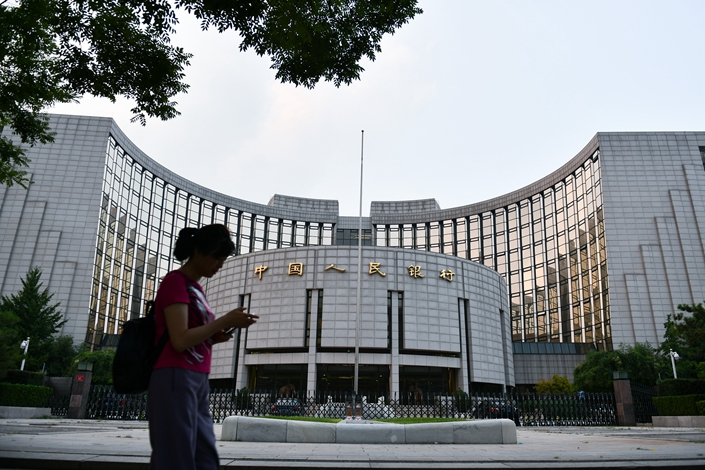 The Beijing headquarters of the People's Bank of China on Aug. 6. Photo: VCG

The People’s Bank of China (PBOC) will soon release a digital currency of its own — the fruit of five years of research and development, a senior central bank official said over the weekend at a conference.

The PBOC’s digital currency and electronic payment system (DC/EP) will not rely entirely on blockchain, the technology that underpins cryptocurrencies, because the technology cannot handle the enormous volume of retail transactions generated in a country as large as China, said Mu Changchun, a deputy director of the PBOC’s payment and settlement department.

Speaking at the China Finance 40 Forum meeting in Northeast China’s Heilongjiang province on Saturday, Mu said the central bank has handed off development of DC/EP to several institutions, with each employing its own technology roadmap. The first to win mass acceptance for its own approach “will win the game,” he said.

However, Mu did not mention exactly when the currency would be released.

Mu’s statement is in line with what former central bank chief Zhou Xiaochuan said in an article (link in Chinese) published last month in the PBOC-backed China Finance magazine. When developing a digital currency, the PBOC should allow different technologies to compete, Zhou said.

The PBOC began researching digital currency in 2014 at Zhou’s direction.

The PBOC will stick to centralized management of its digital currency and the issuance will be based on a “two-tier” operational structure, meaning the central bank will issue the currency to commercial banks and other institutions, which in turn circulate the currency to the public, Mu said.

Under the two-tier structure, the virtual currency will be guaranteed by the central bank, he said.

Earlier this month, the central bank said at an internal meeting that it will speed up research and development of DC/EP, and study the development of virtual currencies both at home and abroad.

This story has been updated to better describe the digital currency’s “two-tier” operational structure.