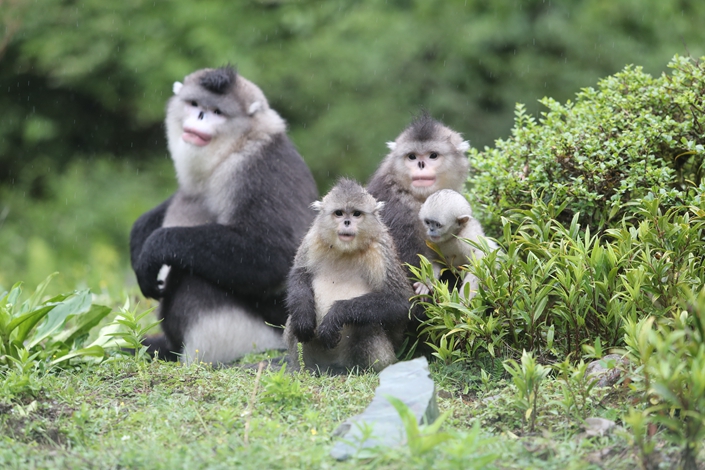 Located about 100 kilometers (62 miles) west of Lijiang, Liju sits at the foot of Mount Laojun. In 1989, Long, who was then working at the Kunming Institute of Zoology of the Chinese Academy of Social Sciences, visited a neighboring township in search of the endangered monkeys. Aided by Liju villagers, he was able to observe some 100 to 150 snub-nosed monkeys over a period of several years. In 2003, Long returned to Mount Laojun to track them using GPS technology in order to study their habits.

Yang, a Liju villager, was invited to join their group as a guide. He accepted out of a curiosity that has not waned in more than 16 years. In addition to leading the Mount Laojun patrol team he helped establish, he now directs the Mount Laojun Biodiversity Conservation Center in Lijiang, and the director of the Misizi Eco-Agricultural Development Cooperative based in Shitou township. Conservation and development have become inseparably intertwined with his life.

About 3,000 Yunnan snub-nosed monkeys are thought to remain in the wild, all confined within a relatively narrow area of 20,000 square kilometers (7,722 square miles) in northwestern Yunnan. The monkey is capable of living at higher altitudes than any other known primate aside from humans. It’s also on the International Union for the Conservation of Nature’s “Red List” of threatened species. Habitat destruction and poaching caused their numbers to decline sharply, making them nearly impossible to spot before the 1980s, when efforts to protect the species began.

When the Baima Snow Mountain Nature Reserve was established in 1983 it became the first protected area for snub-nosed monkeys and their habitat. At that time, little was known about their distribution and habits due to their rarity — even some managers of the reserve had never spotted one. In 1994, after eight years of research, Long and his team estimated that there were about 1,500 of the monkeys living in the wild. Today, there are four additional protected areas in Yunnan and the Tibet autonomous region.

Today, the snub-nosed monkey population is growing steadily. Yet challenges remain, such as continued destruction of their habitat, the long growth cycle of the spruce and fir trees that they prefer to reside in, habitat fragmentation and slow-moving restoration efforts, illegal trafficking, and difficulties obtaining accurate quantitative statistics. Additionally, decentralization of protection funding and a lack of transparency have seen work duplicated and money wasted.

Then there’s the fact that human poverty alleviation efforts often clash with conservation. The snub-nosed monkey is distributed across poor, rural areas of the province where communities tend to fell trees and rely on the forests for the mushrooms and herbs growing in the underbrush. Mount Laojun currently has no established natural reserves.

When the Arlington, Virginia-based TNC first came to Liju in 2003, they cooperated with local villagers and the government to find a sustainable model of community-run protected areas that involved government supervision and policy support, funding and technology from environmental protection groups, the active participation of local villagers, and community patrols. This was aimed at developing a harmonious coexistence between man and nature.

“One of the fundamental ideas of the community project is to promote protection through development. But how can we promote development? Generally, foreign NGOs intervene to support communities (to) develop alternative livelihoods, for example. But whether or not the local people can continue to develop alternative livelihoods after the NGO leaves, or how these can be linked to protection are big questions,” Liao Binghong, the manager of the TNC’s Yunnan Conservation Project, told Caixin.

The snub-nosed monkey is said to have been first sighted in 1890. Two French explorers captured seven of the animals in what is the modern day Deqen Tibetan autonomous prefecture in the northwestern corner of Yunnan province, and sent their skulls and skins to a Paris museum for preservation. In 1897, French zoologist Henri Milne-Edwards gave the first complete scientific description of the monkeys based on these materials.

After that, their existence became something of a mystery. Until the early 1980s, there were no recorded live sightings.

From 1987 to 1994, Long conducted field research and determined the distribution of the monkey across six counties in Yunnan, identified thirteen different populations and between 1,000 and 1,500 species. In 2014, another population of monkeys was found, extending the distribution area another 40 kilometers to the south.

Researchers and conservationists say the Yunnan snub-nosed monkey is an “umbrella species” — meaning protecting it will benefit biodiversity and preserve ecosystems throughout the region. The monkeys’ habitat is one of the 35 priority areas for biodiversity conservation in China.

While there is still much left to be learned, it is certain that human activity is having an impact. “There are two pressures on the habitat of the Yunnan snub-nosed monkeys,” said Cui Liangwei, a professor at the School of Biodiversity Conservation at the Southwest Forestry University in Kunming. “One is the decrease in high-altitude pastures, and the other is increase in erosion from low-altitude farmlands, ultimately compressing their habitats into very small areas.”

“It is very difficult to change the livelihood of a community,” he said. “We need to make efforts to promote community development.”

In 2003, Long joined the TNC China Project to focus on protecting the monkeys at Mount Laojun. “I turned from a scientist to a protector, not only to identify problems but also to solve them,” he said.

The twin peaks of Mount Laojun stand in the middle of the snub-nosed monkey distribution area, Long once wrote, making an ideal spot for a research base. The mountain also lacked established nature reserves leaving a “gap” in conservation, he said. Thus began the protection work that took root in Liju village.

People raised in the mountains know the mountains best. And so at the end of the project, the three villagers, supported by TNC, set up a private patrol team in Liju captained by Zhang Zhimin, a former hunter. Yang, then 19, was a member of the team too, though at that time he had little concept of species conservation. Shortly after going out into the wild, he caught his first sight of the monkeys: “There were 70 or 80 of them. They crossed a ditch, jumped from one tree across to the opposite one. It was spectacular,” he said.

For many of the minority ethnic groups living in remote Yunnan, the snub-nosed monkey was a prize catch. Its meat could be eaten; its skin could be used for swaddling; and its bones could be used in medicine. Poaching is one of the major threats to the monkey’s survival. Thus, another job of the foot patrol was to dismantle hunting traps, identify illegal logging, and prevent other human interference with the wildlife on Mount Laojun.

There are currently only four patrolmen working full-time. Temporary personnel step in to help as needed. The monthly salary has increased from 600 yuan ($85.29) per person when the team was founded to more than 3,000 yuan — a tidy sum in a place where the average income last year was only 7,314 yuan.

In 2017, TNC agreed to provide support to implement a grid-based infrared camera monitoring system in the area. Yang trained the patrolmen on how to install and use the equipment. So far, 150 infrared cameras have been installed in an area of 150 square kilometers. The cameras capture images not just of monkeys, but of other rare species — and human intruders.

In 2018, the Lijiang Laojun Mountain Biodiversity Conservation Center, a non-profit, was established with support of the national park and other government departments. Now, Yang is not just the patrol leader but is also the president of the center, managing the relationships between the organization, grass-roots conservationists, the government, and the different units.

“Now, the protection center will act as the main body to communicate with the grass-roots level,” Liao said. External forces can get things started, but “only when villagers take independent responsibility for protection can the community protection work be sustainable.”

Government poverty alleviation efforts have included encouraging villagers to grow more plants, such as herbs with medicinal qualities. But Caixin learned that the harvest period of the seedlings of one such herb, the Paris polyphylla, is more than five years and requires significant monetary and labor investment.

Many villagers resort to gathering bamboo shoots, caterpillar fungus, and other fungi for additional income. However, the over-harvesting destroys vegetation and the increased human activity places stress on the snub-nosed monkey’s habitat.

Liao says that the infrared cameras could help mitigate the impact on undergrowth by catching illegal gatherers and monitoring wayward livestock.

None of the efforts would be possible without the voluntary contributions of local villagers. Liju has experimented with cooperatives for selling agricultural products with mixed success — some villagers have been disappointed with the results as the system encounters frequent bottlenecks and setbacks. In 2018, the cooperatives began to dabble in the nature education business, aiming at surrounding communities, school students and children from the cities.