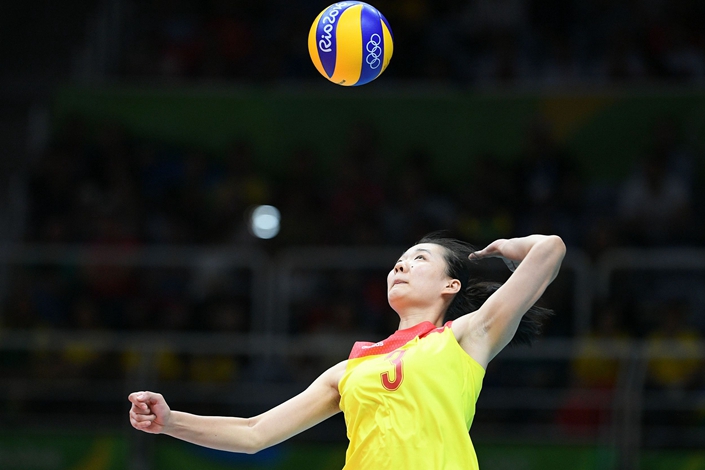 A member of the Chinese women’s volleyball team that won Olympic gold in 2016 has been suspended for four years after testing positive for banned substances last August, the Chinese Anti-Doping Agency (CADA) announced this week.

Yang Fangxu was found to have been using erythropoietin (EPO), a hormone that promotes the production of red blood cells, in turn increasing the amount of oxygen carried in the blood. This can increase athletic performance by boosting muscular endurance.

On Tuesday, CADA announced 24-year-old Yang had tested positive for the substance on Aug. 11, 2018, shortly before the Asian Games. She will be banned from competition until Sept. 11, 2022 — missing next year’s Summer Olympics in Tokyo.

Yang had been listed as a member of the team set to compete in the Asian Games held in Jakarta last year but did not appear. National team coach Lang Ping told media at the time that she was absent due to injury. However, the new announcement confirmed that Yang had in fact tested positive for banned substances the week before the Asian Games.

In March, Lang revealed that four members of the national team had retired after winning at the Rio de Janeiro Olympics, including Yang. In June, Yang’s social media accounts also announced her retirement.

The substance has been banned by the World Anti-Doping Agency (WADA) since the early 1990s, and a test for its detection was introduced at the Sydney Olympics in 2000.

Seven-time Tour de France winner Lance Armstrong was stripped of his cycling titles after he admitted to EPO use in 2012. A number of professional athletes, primarily cyclists, long- and middle-distance runners, boxers, and sprinters from all over the world have previously served bans lasting from two to four years for testing positive for EPO use.

Yang is not the first Chinese volleyball player to be embroiled in a doping scandal. Former national women’s team member Wu Dan tested positive for banned substance strychnine at the 1992 Summer Olympics and was subsequently suspended.

Earlier this year, a case involving Chinese Olympic swimmer and three-time Olympic gold medalist Sun Yang was reopened. To prevent antidoping test collectors from leaving his home with a sample last September, he smashed a vial of blood with a hammer. Though an independent panel ruled in his favor, WADA appealed the decision. The hearing at the Court of Arbitration for Sport will be held in September. Sun won the men’s 400-meter freestyle at the swimming world championship last month.