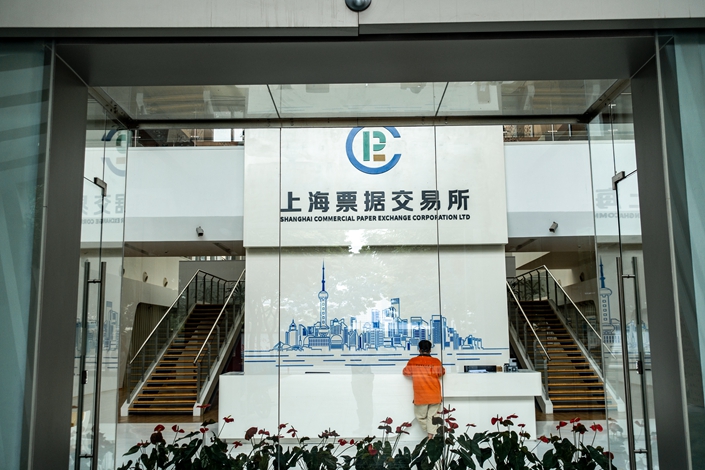 The exchange said that it has received the go-ahead from the People’s Bank of China, the central bank, to develop the standardized notes, according to a statement released Thursday (link in Chinese). The first batch of standardized notes are backed by an asset pool formed by discounted commercial paper accepted by Bank of Jinzhou Co. Ltd., with a total value of 500 million yuan ($71 million), the SCPE said in a statement Friday (link in Chinese).

The yield of the notes, which have a three-month maturity, will fall between 4.5% and 5%, according to the Friday statement.

Standardized notes are tradable beneficiary certificates backed by a pool of commercial paper or bankers’ acceptances — funding instruments to facilitate commercial transactions — with similar maturities, which are restructured to be given the same value per note. Many industry players said that the standardized notes can be seen as asset-backed securities (ABS) backed by discounted commercial paper or bankers’ acceptances.

Commercial paper and bankers’ acceptances are a form of promise of future payment and a type of debt instrument often used in China as a payment tool. A company can obtain an acceptance bill from a bank and present it to a supplier, for example, as a guarantee of future payment. But the bill can also serve as a financing tool because the receiver of the bill, the supplier in this case, does not need to hold it to maturity. The supplier can sell the bill at a discount to a bank if it wants funds faster. The bills are also traded among banks at discount rates.

Before the announcement of a state-backed restructuring of Bank of Jinzhou, its bankers’ acceptances saw high discount rates on the market, at one point even rising above 10%, a market participant said, adding that it was hard for the bank to find buyers given the high rates.

“After the takeover of Baoshang Bank, some small and midsize banks have come under liquidity pressure, which boosted the progress of the development of such a financing tool,” a source closed to the matter told Caixin.

Overseen by the central bank, the SCPE was established as a platform to trade commercial paper or bankers’ acceptances to help protect investors against fraud, as the market had taken on risk due to opaque trading information and poorly regulated intermediary agents.