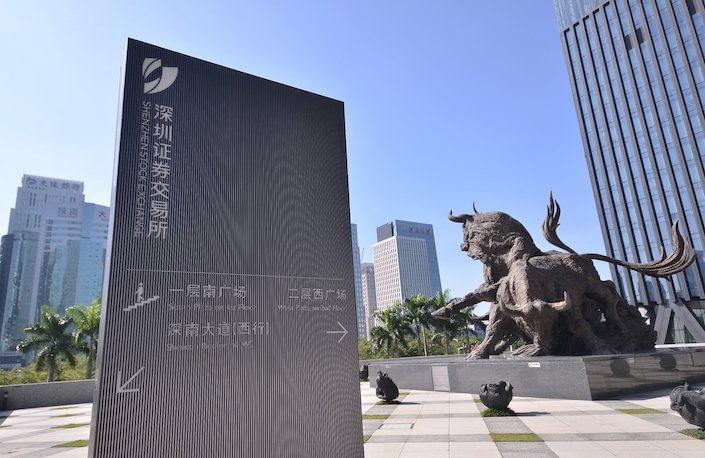 As of Monday, there are 769 companies listed on the ChiNext board in Shenzhen, most of them hi-tech companies. Photo: VCG

Shenzhen’s ChiNext board for growth enterprises surged Monday after Beijing rolled out a plan for bolder reforms in the city, including introducing a registration-based initial public offering (IPO) system for the board.

The State Council, China’s cabinet, in a directive issued Sunday evening set a goal of turning the southern port city in Guangdong province into a city with world-class economic competitiveness and innovation.

The directive calls for “studying and improving the system for listing, refinancing, mergers and acquisitions, and restructuring on the ChiNext board and creating conditions to push forward the reform of registration-based IPO system.”

The ChiNext Index jumped 3.5% to close at 1,622.84 points Monday, outperforming the broader market.

The market has been anticipating the expansion of the registration-based IPO system to the ChiNext board after Shanghai’s new Nasdaq-style tech board adopted the system, which simplifies the lengthy approval process that companies now must go through before floating shares on the mainland market.

The Shenzhen stock exchange set up a special group of more than 10 staffers from various departments to prepare for the adoption of the registration-based IPO system, a broker in southern China told Caixin. He said he expects the reform to be completed in the first half of 2020.

“We have been working on a number of reforms, including the registration-based IPO system,” a senior executive at the Shenzhen stock exchange told Caixin. He said the exchange also participated in the preparatory work on the registration system of the new Shanghai board. He didn’t provide a specific timetable for the change, citing the need to coordinate with the securities regulator’s plan.

ChiNext was inaugurated in October 2009. As of Monday, there are 769 companies listed on the board, most of them hi-tech companies.

Market participants said the central government document is significant and will promote a number of reforms for the board.

Guangdong province for the first time included the registration-based IPO system in this year’s government work report, stating that the provincial government will seek national support for the change. The Guangdong Financial Supervision and Administration Bureau said in February that the ChiNext board has laid a solid foundation for a trial of the registration-based IPO system.

During this year’s annual meeting of legislative delegates and political advisers in March, Shenzhen Stock Exchange Chief Executive Wang Jianjun said the ChiNext board is well prepared for the reform.

Yi Huiman, chairman of the China Securities Regulatory Commission, also said in March that the Shanghai tech board would work as a test bed for the registration system for China’s A-share market. Experience from the Shanghai new board will be promoted to other boards of the A-share market, he said.

To some extent, the two tech boards compete with each other. Geographically, ChiNext also faces direct competition from the Hong Kong stock exchange. The uneven quality of companies listed on ChiNext has made the reform an urgent matter, a broker told Caixin. With the launch of Shanghai’s Science and Technology Innovation Board, ChiNext is losing its appeal for tech start-ups, the broker said, pointing out that many potential IPO candidates turned to Shanghai rather than ChiNext.

To lure more potential IPO candidates and facilitate their listing, the Shanghai Stock Exchange set up an office at Guangdong Financial Supervision and Administration Bureau, according to people close to the Shanghai exchange. In March, the Shanghai exchange opened a southern center in Guangzhou to better serve tech companies based in southern provinces including Guangdong, Fujian and Hainan.

Taking advantage of its 10 years of experience, the ChiNext board may differentiate itself from the Shanghai new board with the registration reform, a broker said. For example, the two boards target different investors. The Shanghai new board requires that individual investors must have had a daily average balance of at least 500,000 yuan ($74,500) in their securities accounts and a minimum of 24 months of experience trading securities, while the ChiNext doesn’t have a balance or trading experience requirement.