In Depth: China’s New Tech Board Takes Off for Long-Term Mission 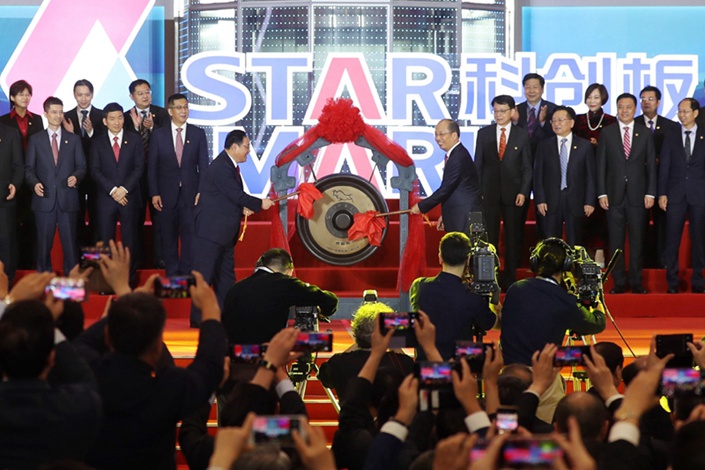 China’s new Nasdaq-style stock trading board debuted last week like a skyrocket blazing across the firmament of world equity trading. Now the question is how the STAR Market will perform as the dazzle fades and it comes down to earth.

By the end of the week, the first-day frenzy of the Monday opening showed signs of cooling. The new board is expected to continue an upward trajectory for a while as new investment targets are scarce relative to demand and market enthusiasm is high, analysts said. But sooner or later, the market will fall back to rational levels and stock prices will reflect companies’ business performance, they said.

At the same time, the STAR Market has a long-term mission of pioneering reforms for China’s stock markets, including registration-based listings, looser restrictions on price movements and broader use of short selling and margin trading, according to Fang Xinghai, deputy chairman of the China Securities Regulatory Commission (CSRC).

“We will make sure of the success of the new tech board,” Fang told media on Jul.19. The immediate tasks are setting up the system and ensuring that initial listings follow the rules, he said.

The long-term criterion for the success of the new tech board will be whether it can attract star companies to list, said an official close to regulators, who said it will take time for reforms to take effect.

The high-tech STAR Market hosted by the Shanghai Stock Exchange finished its first trading day on Jul.22 with an average 140% gain for the first 25 listed stocks, creating three new billionaires and its first company with a market capitalization of more than 100 billion yuan ($14.5 billion).

Stocks on the board locked in first-day gains of between 84% and 400% compared with offering prices, even as most slipped from intraday highs. The value of shares changing hands surpassed 48 billion yuan on the day. That was about 13% of the total trading volume on all Chinese exchanges, which include more than 3,800 listed stocks.

The new board’s spectacular opening came just months after President Xi Jinping initiated the idea in hopes of invigorating China’s capital market and luring more fast-growing companies to list at home rather than in New York or Hong Kong.

The top leadership’s endorsement made the new board a focus of attention for regulators and investors. It is seen as a proving ground for China’s stagnating stock market reforms with its mechanisms for registration-based listings, greater leeway for daily fluctuations and more tools for investors to hedge risks.

There is lingering concern that the new market was over-hyped, based on the extraordinarily high valuations of new listings. Companies on the new board are priced at an average of 49.21 times reported earnings, more than double the limit of 23 set by Chinese regulators for companies listed on other boards.

On the second day of trading, the average increase of the 25 stocks eased to 7.9%, and on the third day, to 11.4%. Daily turnover also dropped to less than 40%. Data from the Shanghai exchange indicated selling activity on the first day of trading as institutional investors unloaded their positions to lock in profits. Retail investors were the major buyers stepping into the new market.

It will come as no surprise if some of the stocks fall below their offering prices, said an official close to securities regulators. It would indicate the functioning of the market-oriented pricing mechanism and prove whether the initial market pricing was at a reasonable level, he said.

Market investors interviewed by Caixin said trading on the new board is still on a relatively small scale. New problems and issues may emerge as the market expands, testing the reform commitments of regulators and market players, they said.

The launch of the new tech board is only a partial reform that requires follow-up revisions to law and supervision to support systemic changes, said the official close to regulators. “It will move forward as an upward spiral,” the official said.

Excitement was high in the trading hall on the fifth floor of the Shanghai Securities Exchange Building in the Pudong area last Monday for the opening of the STAR Market. Officials, company representatives, investors and reporters gathered to see trading data flashing up on the electronic boards.

The new board blasted off with all but one of the 25 stocks swinging by more than 100% during the session. Anji Microelectronics had the biggest price range of 340% between its high of 243.20 yuan and low of 110 yuan.

Twenty-two stocks triggered a circuit breaker that causes trading to be automatically suspended for 10 minutes. Fourteen stocks paused trading after rising 30% from their opening price, and eight were paused after falling 30%.

The performance of the 25 initial stocks on the STAR Market exceeded expectations. Institutions previous expected a 30% to 50% rise in the stocks’ first day of trading, said Shi Minjian, a manager of HFT Investment Management Co. Ltd. Many expected the new board’s first-day average gain to stay well below the actual 140% and come in closer to the 106% first-day increase booked by the ChiNext board in Shenzhen on its debut in 2009, Shi said.

The small number of stocks and massive demand drove the surging prices, said Jiang Shan, fixed-income investment manager of Penghua Fund Management Co. Jiang expects the daily range of stock prices to fall back to a more rational 30% to 50%, but it may take more than three months for prices to stabilize, he said.

Eased restrictions on the daily movement of stocks on the new board will allow investors to find more rational prices more quickly, Shi said. Unlike China’s other boards, the STAR high-tech board has no daily limits for the first five days that each stock trades. After five days, the daily limit will be set at a gain or a drop of 20% for the new board. On other boards, the current cap on share-price fluctuations on the first day of trading is 44% and subsequently 10% a day.

Moving forward, stock performance on the new board will gradually differentiate and moves will be determined by whether companies’ business growth meets investors’ expectations, a fund manager said.

Some stocks may drop below their offering prices as investor enthusiasm fades and the market adjusts to normal levels, an investment banker said.

Stabilized daily turnover rates and an increase in the number of stocks trading on the market will be key indicators that the market is reaching a more rational level, Shi said.

But there are also concerns that an increase in the number of stocks on the new board will lead to cooler trading for individual issues. The current 3 million authorized investors on the new board are sufficient to support trading of dozens of stocks, but it will be difficult to maintain each stock’s activity when the number of stocks increases to hundreds, said Kang Shuiyue, chairman of Danyang Investment Group.

Regulators should ease restrictions on investors trading on the new board so that the market can maintain active trading in the long run, Kang said. Under current rules, people who want to buy stocks listed on the new board must have had a daily average of at least 500,000 yuan in assets ― excluding borrowed cash and securities ― in their securities accounts in the previous 20 trading days before filing an application to open an account. They must also have a minimum of 24 months’ experience trading securities. Individuals who can’t meet the requirements can invest in the high-tech board only through mutual funds.

Policymakers and industry players are expecting the new tech board to test several long-awaited changes in China’s securities market, including broader use of short selling. In short selling, investors who expect a stock to decline borrow shares and sell them, intending to buy replacement shares back later at a lower price and pocket the difference.

The new board granted more flexibility for this strategy, which offers investors a way to bet on future price drops. It is helpful for curbing speculation as it can keep share prices in check and perhaps head off market bubbles, analysts said.

China rolled out rules in 2011 for short selling and margin trading, or investing funds borrowed against shareholdings, but tight restrictions have made short selling rarely used. As of July 19, the outstanding balance of short selling in the Shanghai and Shenzhen markets was 9 billion yuan, 1% of the outstanding balance of margin trading of 901.3 billion yuan, according to data from China Securities Finance Corp. Ltd., a state-owned intermediary that lends shares that it has either bought or borrowed to brokerages.

Rules governing the new board allow the shares of companies listed there to be the targets of short selling and to be traded on margin from the first day of listing, compared with a delay of at least three months required on other boards. Meanwhile, the new board also relaxed restrictions on the sources of securities that investors can borrow, although it kept a controversial requirement on the next-day stock-settlement cycle, which many experts urged shortening to the same day to improve market liquidity and reduce price fluctuations.

Market data showed that on the first trading day, margin trading on the new board totaled 1.3 billion yuan while short selling reached 797 million yuan, a much narrower gap than on other boards.

With the high prices, many investors are now interested in shorting shares on the new board, a brokerage source said. But he pointed out that Chinese investors still widely lack experience of short selling.

The new tech board made a long-sought breakthrough by shifting the time-consuming approval-based listing mechanism to registration-based IPOs, which involves a review by the Shanghai bourse and registration by the securities regulator.

In addition to the first batch of 25 companies cleared for trading the new market, more than 100 other companies have submitted listing plans to the Shanghai exchange for review.

Several investment bank sources said the registration process with the CSRC, which would take up to 20 working days, needs to be improved with more information disclosure to make it more transparent. Regulators need to change their old mindset of making judgments on whether a company should go public, analysts said.

Applicant companies and their financial advisers also need to improve the quality of their disclosures to make them more readable and understandable, market participants said. Compared with filings on the Hong Kong stock exchange, which often contain one page of carefully written information, filings submitted by domestically listed companies often run hundreds of pages with a flood of information, an investment banker said.

This reflects domestic intermediaries’ lack of ability to refine information as well as market players and regulatory officials’ reliance on listing all detailed information in hopes of avoiding responsibility if anything goes wrong, analysts said.

In the future, regulators should require companies and intermediaries to improve the quality of their disclosures based on the value of the information, said an official close to the regulatory body.