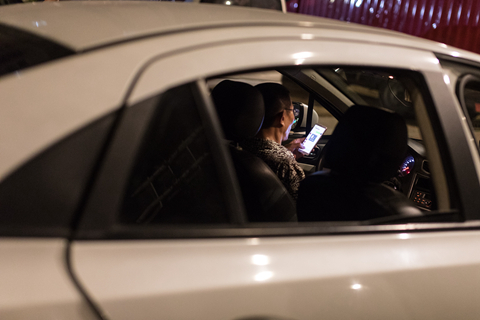 A ride-hailing car driver checks his phone after wrapping up his last ride in Nanjing, Jiangsu province on July 5. Photo: VCG

Growth of China’s once red-hot online ride-hailing market is expected to further slow, but there is a route to profitable growth, according to a global consulting firm.

The market is expected to expand less than 5% this year, down from a 25% increase last year, amid safety issues and mounting regulations, Bain & Co. said in its 2019 APAC Mobility Report published Tuesday.

The consulting firm also lowered its estimates for the size of China’s online ride-hailing market to $60 billion by 2021 from a previous expectation of $72 billion by 2020.

Venture capital in the industry has also fallen off a cliff. Total investment and financing in China’s car-hailing industry dropped 90% to $1 billion in 2018 from $10 billion the year earlier. Toyota Motor Corp.’s $600 million investment in July in market leader Didi Chuxing Technology Co. was one of the few recent financing deals in the industry.

Didi, which has more than 85% of China’s car-hailing market, is facing a decline in monthly active users and stricter regulations after two passengers were raped and murdered last year.

Didi’s dominance hasn’t brought profitability to the company. In a bid to reach that point, Didi reduced passenger discounts and driver incentives, which ultimately decreased the supply of available cars, Bain said.

To reduce costs and increase revenues, Tsang suggested that car-hailing companies could make better use of data and proprietary algorithms for real-time adjustments to pricing and incentives and adopt localized pricing strategies while pursing growth opportunities in lower-tier cities.

Electric vehicles could reduce fuel costs by 65%, according to Bain research in China. With the number of charging stations expected to increase more than six-fold from 2018 to 2020, electric vehicle fleets could be a viable near-term alternative in China, the report said.

Automakers, which had been reluctant to work with ride-hailing platforms like Didi, grew more open to such partnerships as they began to recognize the threat that ride-hailing posed to car ownership. Automakers have found they can’t make money by selling cars but can do so by putting them into use, Bain’s global Vice Director Liu Xiangping said.

As the Chinese government cuts subsidies for electric vehicles, automakers face difficulties in the sale of medium and low-end electric cars in third- and fourth-tier cities, so cooperation with car-hailing companies can help with uptake of certain low-end electric cars, Liu said.

Autonomous vehicles will be the biggest game changer for mobility in developing Asia by greatly reducing driver costs and improving fleet utilization, the report found.

Although China is not an absolute leader in autonomous driving technology, government support and increasing cross-platform cooperation could help the country to catch up, Tsang predicted.

Didi announced earlier this month that it has formed an independent company for its automated driving division to focus on research and development, product application and business development in the sector.