Editorial: How Should We Remember Deng Xiaoping’s Legacy? 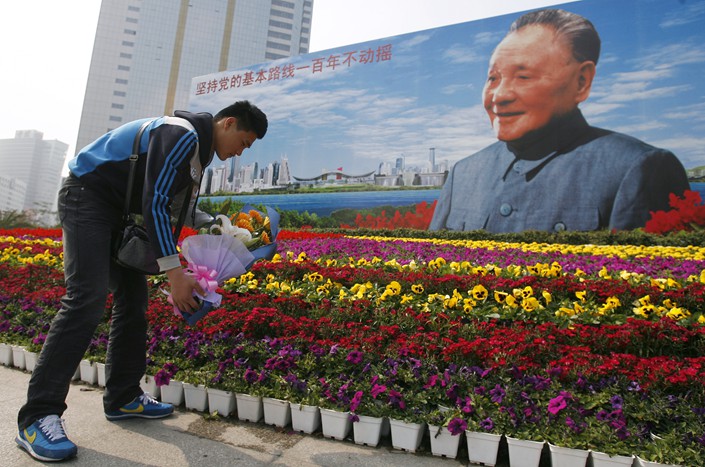 Editor’s note: Today is the 115th anniversary of the birth of former Chinese leader Deng Xiaoping, known as the engineer of China’s opening-up and reform toward a market economy. This piece was adapted from an editorial originally published in Caixin’s weekly Chinese magazine on Aug. 18, 2014, to remember Deng’s legacy.

Deng Xiaoping (1904-1997) was born 110 years ago this month. The 17 years since Deng’s death have passed in the blink of an eye. But in terms of governance and policy, China today can be seen broadly as still being in the “era of Deng Xiaoping.”

At this crucial juncture for comprehensively deepening reform, as China faces the challenges that come with social, economic, and political transformation, how should it continue or even surpass the legacy of Deng Xiaoping? The anniversary of his birth provides an important occasion for considering this important question.

Deng has left behind a rich political legacy. In line with the historical trend and the will of the people, he put forward a set of theories on building socialism with Chinese characteristics. His most cherished principle was “emancipate the mind, seek truth from facts.” This was also the most distinctive part of his worldview. In the late 1970s, through the debate over the “criterion for truth,” Deng decisively ended the nation’s blind following of former leader Mao Zedong’s doctrines and shifted China’s focus on class struggle as its central task toward economic modernization. Later, he argued that China was and would remain in the first stage of socialism, and drew up the “Three-Step Development Strategy,” a series of targets for the country’s economic growth.

Perhaps the best demonstration of Deng’s drive to “seek truth from facts” was his clear attitude toward “extreme leftist” thinking in the party.

From the 1970s, when China’s political, ideological, and organizational roadmaps were still unclear, to the 1990s, when Deng embarked on his famous Southern Tour to give the slowing-down reform a decisive push, he maintained a clear understanding of the dangers of extreme “leftists.”

When Deng visited the southern provinces at the forefront of China’s reform in 1992, not long after the collapse of the Iron Curtain in Europe, leftist voices within China were increasing in volume. Unlike in the West, the left in China was more resistant to change. Reform stagnated, and the economy entered a three-year slump. Deng said that while there were negative influences from both right and left, the problems on the left were more deeply rooted. As an important member of the Chinese Communist Party’s first-generation leadership, and a core member of its second generation of leaders, Deng was drawing from history, and also creating history, when he made his statements warning against dangers from the left. Deng’s statements on the Southern Tour, made five years before his death, were a powerful parting statement as well as a solemn entrustment to future leaders.

Twenty-odd years have passed in a flash. China has made considerable economic achievements. The country’s reforms have also entered a critical period, where China must navigate extremely complex interests and social contradictions. Many people have proposed looking “beyond left and right” in order to seek consensus on reform. Others believe that the distinction between “left” and “right” is an outdated view of politics that cannot accurately describe the current reality. These views are not unfounded. However, Deng’s understanding of left and right, as well as his warnings against negative influences from the left, still have practical significance in China today.

There are not many people in China today who would endorse total ideological fundamentalism. Even among those who complain about reform and opening-up, there are only a few who openly advocate the return of the planned economy or even yearn for the days of the Cultural Revolution (1966-76). However, leftist inertia is still strong. Traditional dogmas, slogans, and other invisible labels still suppress people’s enthusiasm for reform, including in areas such as the strategic adjustment of state-owned capital, village-level democratic elections, judicial reform and empowering the media as a watchdog.

In addition, both the old left and the new left are willing to endorse government overreach and an overly large public sector as a platform for obtaining power. We cannot prove whether these people truly believe in “big government” or whether this is just a facade. The objective fact is that they seldom advocate restricting power through the rule of law. This kind of thinking has played a role in clearing the way for corruption. Judging by the words and deeds of corrupt elements such as disgraced senior officials Zhou Yongkang and Bo Xilai, there is a strong correlation between corruption and the left in China today.

However, Deng’s legacy has its limitations. He advocated the restriction of government power and, as early as 1980, highlighted the problem of “over-concentration of power,” calling for China to “continue to develop socialist democracy and improve the socialist legal system and institutions.” But these issues have not been effectively resolved to this day.

The unfinished tasks of great men should be the starting point for the achievements of later generations. Since the 18th Party Congress in 2012, China’s decision-makers have worked hard to comprehensively deepen reforms. Through an unprecedented anti-corruption campaign, it has established the prestige of its leadership, and united the hearts of the party and the people. The policy guidelines are clear and the resources have been strongly deployed for the next step of establishing national rule of law. Not only will this tackle the root causes of corruption, it will also create a reliable institutional environment for the transformation and upgrading of the Chinese economy. If we can truly realize the rule of law and follow the Constitution, the rights and interests of all citizens will receive equal protection, and China can truly move “beyond left and right.”

“For a party, a country, and a people, if everything is done by the book, if thinking is rigid and superstition prevails, vitality will disappear and the party and country will not survive,” Deng said. There is no limit when it comes to emancipating the mind, and there should be no forbidden areas when it comes to seeking truth from facts. For the sake of national rejuvenation and the happiness of the people, all anachronistic rules and regulations should be discarded, and all the impediments that hinder the progress of democracy and the rule of law should be abandoned. Only then will reforms and opening up soar to new heights. This is the best way to honor the memory of Deng Xiaoping.