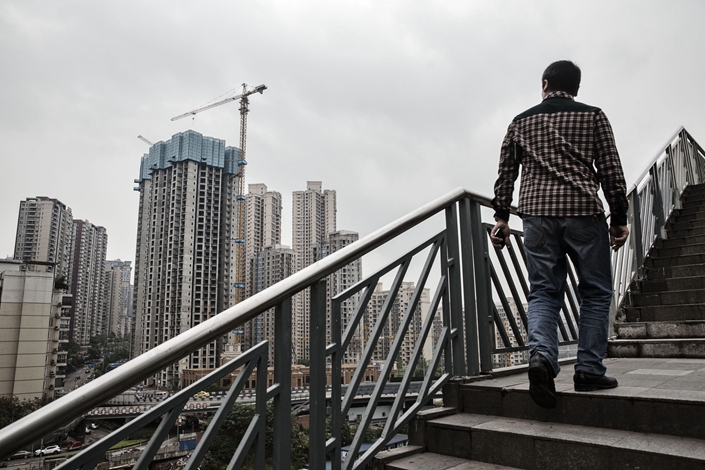 A pedestrian walks up a flight of stairs in front of residential buildings under construction in Chongqing, China, on Thursday, April 14, 2016. Photo: Bloomberg

(Bloomberg) — Some developers may not be admitting as much but there are increasing signs that times are tough in real estate in China.

All three of the country’s biggest residential property firms reported a drop in the number of full-time employees in their first-half results, the first simultaneous downsizing since 2015, Bloomberg calculations show.

Real estate companies in the world’s most populous nation are facing a triple whammy of increased home-buying curbs, a more stringent credit environment and a slowing economy. China Evergrande Group last week reported its biggest profit slump in a decade as debt levels surged — even so, President Xia Haijun said he’s confident the company can meet its 2019 contract sales target.

“The drop in staff numbers is closely related to the home-market headwinds,” said Yan Yuejin, a lead analyst at E-House China Enterprise Holdings Ltd.’s research institute. “As developers face weaker sales and slow land buying, they need fewer people in investment and marketing, and they have to think about how to cut costs.”

Country Garden Holdings Co. Ltd., which employs about the same number of people as Apple Inc., recorded a drop of 11% in the first six months of the year, or around 15,000 staff. Full-time employees at Evergrande, which has been expanding into electric-vehicle production, shrank by around 3,000, reversing an almost three-year-long expansion.

Country Garden said there had been both hiring and “people leaving” this year, but denied any layoffs, according to a report in Caixin that quoted President Mo Bin. The firm has been streamlining its headquarters and sending some employees to work from regional offices, it said in February.

Representatives from Evergrande didn’t immediately respond to a request for comment.

Vanke has been restructuring its organization to match employees better with the changing business environment, local media quoted President Zhu Jiusheng as saying at the company’s interim earnings briefing last month. Zhu added the firm didn’t have any target for staff reductions.