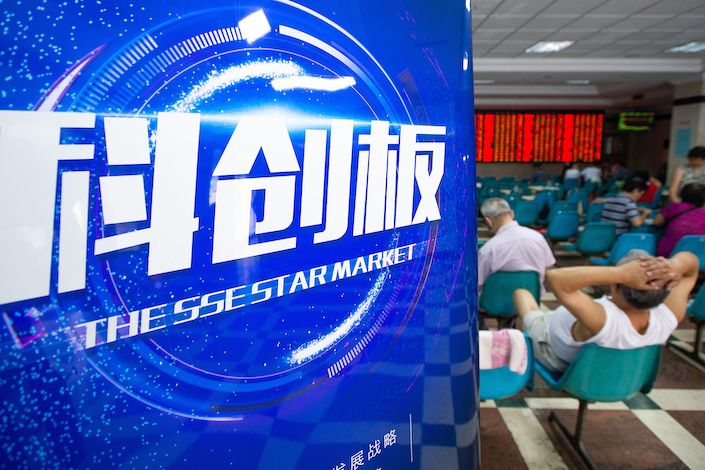 The Shanghai stock exchange for the first time rejected a company for listing on the high-tech board. Photo: VCG

The Shanghai Stock Exchange gave its first nay to a company’s application to list on China’s newly launched high-tech board, citing concerns about connected-party transactions and accounting defects.

The Shanghai bourse Thursday rejected the listing plan of Beijing UCAS Technology Co. Ltd., a company that develops electronic systems for satellites, drones, radar and high-speed rail, after the listing committee reviewed the company’s application, the bourse said in a statement (link in Chinese).

It was the first rejection by the Shanghai stock exchange of a company seeking to list on the new Nasdaq-style STAR Market, although eight companies previously withdrew applicants after the bourse raised questions.

The tech sector-focused new board is a testing ground for the “registration-based” IPO system, which simplifies the lengthy approval process for companies floating shares on other mainland markets. Under the new system, companies can list on the STAR Market after passing a review by the Shanghai bourse and completing registration with the China Securities Regulatory Commission (CSRC), shortening the process by months.

The CSRC earlier this week also for the first time declined the listing registration of Eversec Technology Co. Ltd., a network security company, in the final review stage. The regulator cited irregular accounting practices, lax internal controls and failure to update the prospectus to account for certain share transfers.

In the Beijing UCAS case, the Shanghai exchange attributed its rejection to the company’s heavy reliance on connected-party transactions for revenue and failure to explain whether the transactions were based on fair prices. The issuer doesn’t meet the requirements for sustained operating ability through complete and independent business, the exchange said.

Beijing UCAS initially planned to offer 10 million shares, according to the company’s filing in April.

According to the company’s website, Beijing UCAS is affiliated with the state-backed Chinese Academy of Sciences. Its products are used in the manned spaceflight program, satellites and China’s homegrown BeiDou Navigation System. The company’s prospectus showed that its majority shareholder is Beijing Kongying Technology Co.

Before the rejection, the Shanghai exchange made three rounds of inquiries with Beijing UCAS focusing on its business and profit model.

Beijing UCAS said its main business is research and development projects for government agencies. Such projects contributed 35.38% of revenue in the latest fiscal year and 25.08% and 31.84% in the previous two years.

But the Shanghai bourse said Beijing UCAS’s disclosures of its business model and partners were not adequate. The company failed to provide enough information for investors to make proper investment decisions or judgments on its valuation, the bourse said.

Meanwhile, Beijing UCAS made significant revisions to its major financials in its listing prospectus compared with the previous disclosures a month ago, involving a nearly 10 million yuan ($1.4 million) reduction in profit, indicating lax internal controls and accounting weakness, the Shanghai exchange said.

In a previous reply to the exchange’s inquiry, Beijing UCAS said the profit revisions were made because of changes in the way it calculates tax payments and tax rebates.

The Shanghai exchange decided to terminate Beijing UCAS’ listing review based on the inquiry responses and careful consideration of the company’s business independence and accounting practices, the exchange said.

There are currently 28 companies listed on the STAR Market, which opened for trading July 22.

On Thursday, the Shanghai exchange also cleared the listing application of Shenzhen Jiepu Te Optoelectronics Co. Ltd., a lasers and intelligent equipment producer. The listing plan will be submitted to the CSRC for final review and registration.

The Shanghai exchange has so far received 152 listing applications and approved 46 companies, according to the exchange’s website.