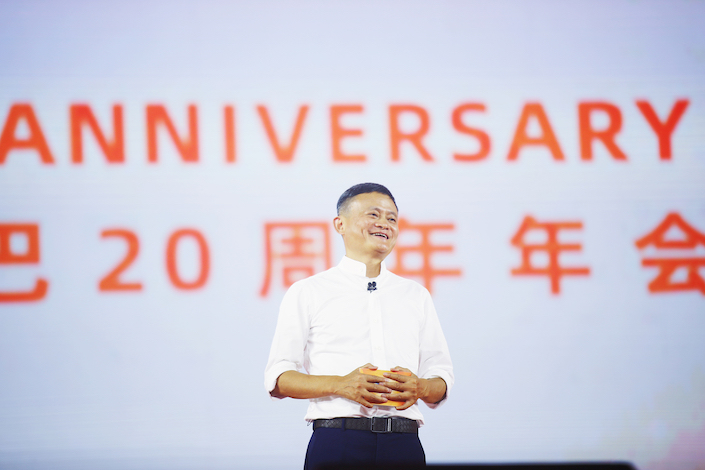 The founder’s departure opens a new era for a transformative business empire that he founded in an apartment in scenic Hangzhou in 1999. Beginning as 18-person startup offering trading services for businesses, Alibaba expanded into a giant e-commerce conglomerate with businesses sprawling from online retail to financial services to artificial intelligence.

The company is the world’s largest internet company with a value of $480 billion, and Ma, a former English teacher, is China's richest man with a net worth of $38.6 billion according to Forbes.

Alibaba also updated its core values Tuesday, the first change in 15 years, reflecting the company’s navigation through a changing environment. The core values include “customers first, employees second, shareholders third” and knowing that “change is the only constant,” the company said.

The world is entering a transition period, Ma said. “Challenges from globalization, China-U.S. trade frictions and worries about the new technologies are all sending a signal that a new era is on the horizon,” Ma said.

Ma will remain on the board of directors until an annual shareholders’ meeting in 2020. After that he will continue as a life-long member of Alibaba’s 38-member top decision body apart from the board.

The unique corporate governance structure of Alibaba may mean that Ma won’t stay too far from the company’s decision-making even after his retirement, analysts said.

Alibaba’s so-called partnership formed by 38 founding partners and senior executive after recent expansion holds the key to the company’s major decisions. The partnership is entitled to control of more than half of Alibaba’s board seats and has the right to nominate board members. The current board numbers 11, consisting of five independent directors, five of Alibaba’s top managers including Ma, and a seat held by Masayoshi Son, chairman of longtime investor SoftBank. Due to its positioning above Alibaba’s board, the partnership is the company’s real strategic planning body.

Under the company’s partnership rules, members of the partnership can retire after the sum of their age and years of working at Alibaba exceeds 60. But Ma and Joe Tsai, co-founder and deputy chairman, will hold their positions for life.

Ma stepped down as Alibaba’s CEO in 2013 but remained as chairman, continuing to play a decisive role at the company, including overseeing its record-breaking $25 billion initial public offering (IPO) in New York in 2014.

In a speech to 60,000 Alibaba staff and guests at Tuesday’s celebration, Ma called his retirement “the beginning of a succession system.” Ma said his retirement is neither an impulse nor a decision made under pressure. Instead, he has prepared for 10 years with fellow executives in hopes of making a seamless transition.

“It’s not about the choice of an individual, but the success of a system,” Ma said.

Ma first announced his retirement plan a year ago, making him the first among a generation of Chinese moguls to officially step down. He said in an open letter at the time that one of his key roles in the year before his formal departure would be grooming Zhang, who became CEO in 2015, to take the helm.

Since then, Alibaba has launched multiple rounds of organizational restructuring and management reshuffles to pave way for the new leadership.

Ma said he will focus on philanthropy after his departure from Alibaba.

“Alibaba is just one of my many dreams,” he said. “I still feel I’m young. There are many places I want to go visit, to challenge. Stepping down as Alibaba’s chairman doesn’t mean I will retire. I will not stop.”

This story has been updated to correct an earlier version to show that Alibaba expects to create 100 million jobs.