Next Year Will Be Key for Robotaxi Industry, Startup Says 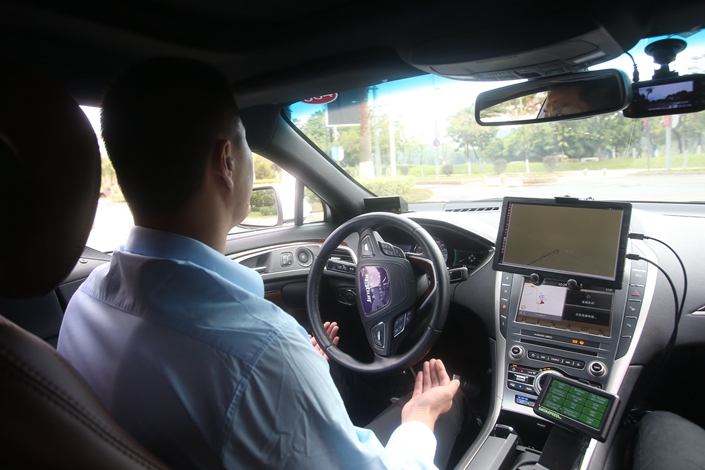 Next year will be a key moment for China’s robotaxi industry as a number of companies launch autonomous taxi services, said the vice president of smart-mobility startup WeRide on Tuesday.

Zhong Hua told Caixin that robotaxis will be key to proving that autonomous driving technology can be commercialized.

He made this prediction after Chief Operating Officer Zhang Li said the company planned to roll out hundreds of self-driving vehicles as part of a trial service in the southern Chinese city of Guangzhou by 2020.

Zhang said the vehicles will operate within designated routes in certain parts of the city. These vehicles rely on autonomous driving technology, but at present they still have a human driver riding along as a precaution.

Founded in 2017, the Guangzhou-based company first mentioned it was planning to enter the robotaxi sector in August when it formed a joint venture with the local government and Guangzhou Baiyun Taxi Group, southern China’s largest cab company.

WeRide is part of a wave of Chinese startups that have ridden an investment boom in the self-driving car sector. But as investment begins to cool, companies are rushing to commercialize — with robotaxis seen by some as a promising avenue toward profit.

In April, internet giant Baidu Inc. formed a joint venture with Changsha, capital of Central China’s Hunan province, with the goal of offering 100 robotaxis in the city by the end of this year.

Didi Chuxing, China’s largest ride-hailing company, announced in August that it plans to launch a robotaxi pilot program in Shanghai, where users will be able to hail autonomous cars from its app. Didi said it will deploy an initial fleet of 30 cars within a few months.

Autonomous driving is one of several emerging areas which China is racing to become a leader. The world’s current robotaxi frontrunner is Google’s Waymo, which launched self-driving taxi services in Phoenix, Arizona, in the U.S. in December.

Yet safety is still a major concern. Last year, a self-driving Uber vehicle killed a pedestrian crossing a street in Arizona.

China rolled out its first national guidelines (link in Chinese) for self-driving road tests in April, which stipulated that vehicles must be tested in nonpublic areas under the supervision of a qualified driver.