So What If Mooncakes Aren’t Your Thing? 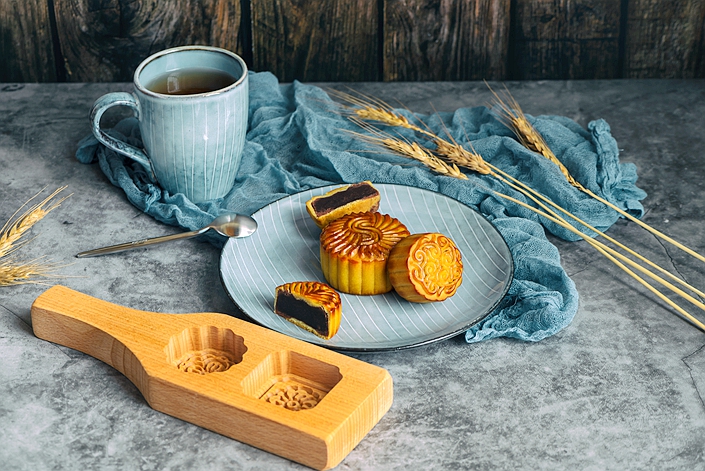 Editor’s note: The Mid-Autumn Festival falls on the 15th day of the eighth month of the lunar calendar (Sept. 13 this year). It is believed that, on this day, the moon is the fullest and brightest of the whole year, and in celebration, Chinese people eat a great variety of mooncakes. Chen Xiaoqing, an award-winning documentary filmmaker and culinary writer, describes his experiences both growing up and working with the delicacy. Chen is currently the deputy editor-in-chief of Tencent Video.

Two pop-ups greeted me when I turned on the computer.

The first was a news alert; it was the 15th anniversary of the Apollo 11 moon landing. The second was an ad. All sorts of deals were on, reminding me that mooncake season was, once again, upon us.

It almost felt like a metaphor. That same moon meant different things to different people.

I didn’t know astronaut Neil Armstrong as a child, but I knew mooncakes. We had them even though, 50 years ago, people weren’t well-off.

Ones from my hometown usually had fillings made of brown sugar, lard, seeds, nuts, crystal sugar, candied fruit and more. Ours used layered flaky pastry, and were placed on wax paper to help catch the crumbs. I don’t know if renowned writer and calligrapher Su Dongpo, of the Northern Song Dynasty (960 to 1127), whose famous poem describing the delicacy was a reference to those from my hometown, but there certainly were similarities.

Although we only had them once a year, I used to take little interest in the pastry.

On the one hand, they were too greasy, and the rock candy inside some could chip one’s teeth. On the other, I associated eating them with homework.

Around the Mid-Autumn Festival, held on the 15th day of the eighth month of the lunar calendar, you always had to write an essay on the moon.

“Cupping a sweet and fragrant mooncake in one’s hands, looking up at the moon, one can’t help but think of the children on the other side of the Taiwan Strait, who live in misery,” such essays would often end with. “How wonderful it would be to one day liberate them, so they can have mooncakes too!”

This was in reference to the aftermath of the Chinese Civil War between the 1920s and 1940s, during which the Communist Party of China gained control of the mainland, driving the Kuomintang-led Republic of China government to Taiwan. The CPC has since been seeking to “liberate” the island.

Some three decades later, I bumped into Taiwanese director Ding Wenjing in De’anmen, north of the Forbidden City in Beijing, having a meal that included a mooncake. When I told her about this at a much later date, I thought she would die of laughter. Instead, her eyes widened. Ding groaned for what felt like ages.

“I had to write these essays too when I was in elementary school,” she finally said. “It was the same thing, except rather than liberate Taiwan, it was about reclaiming the mainland.”

It would seem that, regardless of whether it was the mainland or Taiwan, the culinary properties of mooncakes were less significant than its societal attributes.

I had another reason for disliking mooncakes in my childhood. One Mid-Autumn Festival, I brought one to school. A classmate that lived near a food factory saw me eating and came over.

“You know where the seeds come from?” he asked me quietly.

I demanded to know.

“There’s a bunch of old ladies with a pile of unshelled seeds in front of them,” he explained. “They shove a bunch into their mouths, and after a bit, ‘put put put put put,’ they spit out the shells, then the seeds.”

After saying this, he ran off.

I had a faint suspicion that this was just a rumor, but I wasn’t able to finish the cake that was in my hand. I was traumatized.

It wasn’t until I went to university, and was surrounded by unfamiliar sights and sounds that I started to miss the flavors of home.

Learning to like mooncakes was a process that began once I started working.

My first job was at the main editorial department of China’s national broadcaster, China Central Television (CCTV). At the time, there was a so-called “regional team,” in charge of working with local broadcasters to make documentaries. Every year around Mid-Autumn Festival, friends in the profession from various provinces came to Beijing on business trips and occasionally brought different kinds of mooncakes.

I remember one year, two directors named Li Yusen and Luo Ya, who was a younger schoolmate of mine, came from a TV station in Kunming, South China’s Yunnan province. They brought their version with them, made of flaky pastry filled with Yunnan smoked meat. It was my first time trying this variety.

“Wow,” I thought to myself. “Mooncakes could be savory?”

The mixture of smoked meat and other ingredients completely changed my concept of the pastry. Seeing how much I liked them, from then on, Luo sent some to me every year. My address has changed several times in all these years, but every Mid-Autumn Festival they arrived, exactly on time. They became a tangible part of our friendship.

When I happened upon photos of Luo on social media, I noticed some graying hairs on his sideburns. I realized I hadn’t seen him in decades.

I eventually started writing culinary columns for a couple of outlets. One fall, my professor, Chen Hongfei came to Beijing. The minute he stepped off the train, he went to a restaurant to meet us, his adoring fans. He sat down, reached into his bag and took out a paper package.

“Fresh mooncakes with meat filling from Suzhou,” he said.

My eyes lit up.

But as I reached for them, he stopped me.

He handed them to the waiter, who took them to the kitchen. There they were pan-fried until both sides were crispy. They were then brought back and placed, scalding, onto the table.

“What?” I thought to myself. “You can eat hot mooncakes? What a perfect combination of carbs and animal fats!”

When it comes to mooncakes, everyone has their preferences. My office was no exception. At one time, there was a tie between a Guangdong-style mooncake made by a brand in Macao, and Suzhou’s meat filling.

But one colleague, who was from Inner Mongolia and was passionate about lamb, didn’t like either. Normally, he didn’t mind us teasing him about his food preferences, but when it came to mooncakes, he was very serious; wouldn’t give in. He thought the best ones in the world were from Fengzhen city in Ulanqab, Inner Mongolia, and on one occasion even brought some back.

Whoa, were they big and visually striking. Delicious.

These days, even though my coworkers and I have all gone our separate ways, I can still picture that colleague holding the mooncake, demanding to know everyone’s opinion.

As I’ve grown older, my appetite has dwindled. What’s more, some health concerns have led me to cut down on carbs. At recent Mid-Autumn Festivals, I’ve eaten less, but have sighed and lamented more. I tend to remember certain people and certain events.

After doing food docs for a long time, you start to feel that it’s hard to keep audiences interested in everyday things like mooncakes. But there are still so many secrets in various traditions.

Once I was on a business trip in Guangzhou and saw a friend who worked at what I tend to jokingly refer to as the “Milky Way’s biggest mooncake-maker,” the eight-decade-old Guangzhou Restaurant. One day, he brought me to witness the senior chefs in action. Even just the one step, making the popular lotus paste filling, was spectacular.

After boiling the seeds, which originate from Central China’s Hunan province, they are placed in a wok to be sautéed by hand nonstop for about half an hour. At that point, the heat turns the starch in the lotus seeds visibly pasty, and the snowy blend gradually becomes translucent.

I wanted to capture it on camera.

“On the night of the full moon, our ancestors made food that contained people’ joys, sorrows and hopes,” went the voiceover of one episode of “Once Upon a Bite,” a miniseries on the history of Chinese cuisine. For the past six or seven years, versions of the cake, like the “snow skin” and double egg yolk varieties from Hong Kong and Foshan have often appeared in my films. With a country of this size, there are always new kinds that we don’t fully understand.

When we were shooting “Flavorful Origins” two years ago, we got some firsthand experience in Shantou, Guangdong province, with the tasty, but outlandish fermented bean curd mooncake, which also contained peanuts, sesame and head cheese as part of more than a dozen ingredients. Its many flavors clashed, but the locals loved it.

This year, when filming began on the third season of “Flavorful Origins,” the production crew in Lanzhou, Gansu province, sent over this still, which features a mooncake steamed using sesame oil. Its profile also shows rose petals, turmeric and sesame seeds superimposed in layers, an image reminiscent of a rainbow or the flowing robes of ancient China.

China is simply too big; there’s too much diversity in the food. Mooncakes are a precious inheritance from our ancestors. While the differences in fillings and craftsmanship create sharp contrasts among the varieties, regardless of the differences, people agree to share them on this festival day. To compare them is but another recognition of this culture.