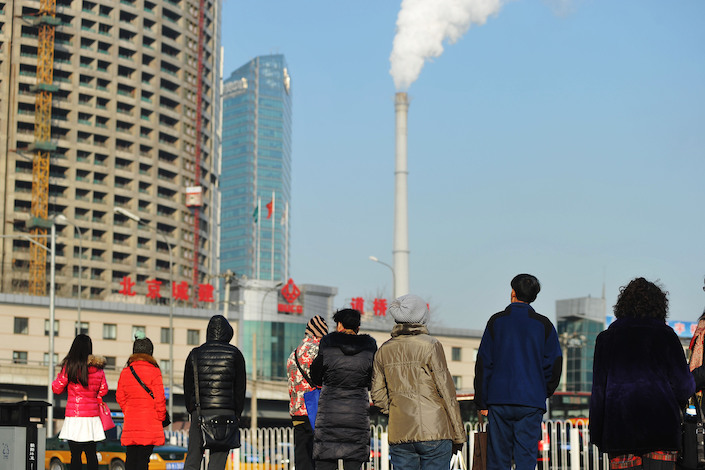 From President Xi Jinping’s 2005 declaration that “green mountains and clear water are equal to mountains of gold and silver,” to China’s hosting of the 2016 G-20 summit highlighting sustainable development and finance, to the nation’s commitment to the UN Paris Climate Agreement, the importance of green development and green finance has become well understood in China.

Why should the financial sector care about environment matters? It’s because many global green development projects hope to collaborate with China’s financial industry on funding. Carbon trading, the most important market development in managing climate change, is also an integral part of financial markets.

Large projects around the world have resulted in defaults or bad loans because of failed environmental assessments. Climate change and environment issues have thus become important topics in the financial sector.

China has experienced a shift of mindset on climate change and environment protection. Initially, understanding and attention to the issue were obviously not enough. Later, after major pollution incidents such as the blue-green algae bloom on Lake Tai and the smog pollution in North China, people’s attitudes toward the issue clearly changed.

At the Copenhagen climate-change summit in 2009, China’s major concerns were that developed countries would use limits on carbon emissions to curb China’s rapid growth. The United Nations Framework Convention on Climate Change adopted in 1992 pledged financing and technology support to developing countries from developed countries, but in actuality such support never materialized.

Only since the 18th National Congress of the Communist Party in 2012 has China come to gradually pay attention to global environmental issues and seriously consider its role and responsibilities.

There has been debate on how to reduce carbon emissions and how to manage them. One approach is setting targets for how much emissions need to be reduced through administrative measures. Another approach, advocated by the central bank and the financial community, is to make more use of market forces by setting emission quotas and allowing for trading in carbon credits, creating a better incentive mechanism and allocation via financing.

A carbon trading market can be more effective in controlling emissions by generating incentives. For example, some Chinese companies that have reduced emissions could sell their carbon quotas in Europe.

All emission reduction measures require technology and equipment investment that need financial market support. There are risks involved in investment and in research and development issues that require management. These are the strengths of financial markets, in which relevant tools and derivatives can be developed to effectively price and manage financial products and risks.

How to set carbon price

Under the Paris Agreement, which went into effect in 2016, all countries agreed to work to limit the global temperature rise this century to less than 2 degrees Celsius compared with pre-industrial levels. Based on the target, a total carbon emissions goal can be calculated. China at first opposed the idea of setting a total emissions quota. The main concern was restriction of China’s economic growth.

Another concern was the difficulty of implementing an emissions quota. There was also no clear idea of how to measure and verify carbon emissions.

China set up its first carbon trading market in Tianjin. As market participants know, however, price formation could be chaotic, temporary and volatile without an emissions cap. Later, around the Copenhagen summit, China proposed to set an emissions limit in proportion to its GDP growth rather than an absolute limit. Under this approach, more emissions would be allowed if GDP grew faster and fewer emissions if growth slowed.

This approach, however, has a problematic assumption that there’s a linear relationship between carbon emissions and GDP growth. Actually, this has always been a big mistake based on simplified thinking. Technological advances and options can significantly overturn this assumption.

Without a total emissions quota, a price formation mechanism is impossible to achieve. The development of a carbon market won’t be ideal and would be unlikely to play a sufficient role in the green development and finance.

Carbon quota trading could also be layered. Before the 2009 global Financial Crisis, there was a financial product known as a collateralized debt obligation (CDO), a type of structured security made up of assets with different levels of risk. Different tranches in a CDO were paid in order based on risk. This approach, often called a dual-track approach in China, could also be applied to carbon emissions.

Under this approach, a carbon quota would take into account current economic structure, current growth and future requirements. For example, a baseline quota may be set starting in a particular year. In the first year, any emissions below the quota are free. Then payments increase each year, or the baseline may be lowered each year and expand coverage of the carbon quota. This gradual and transitional arrangement, which has also been EU’s approach, can achieve a goal that will subject everyone to the carbon market mechanism within in a certain number of years. This approach won’t immediately affect the economic model that maintains current growth, so it won’t lead to negative GDP growth.

A transition period is necessary, but a long-term dual-track approach is not plausible. The system should be designed to increase pressure over time so as to achieve reductions in emissions.

Meanwhile, price formation could provide effective incentives. This is also a process of exploration, depending on people’s understanding of the system. Currently some believe the carbon quota price should be higher and the incentives need to be increased. This would depend on demand and supply in the market. Emissions in some regions will inevitably rise, but increased emissions have to be matched with the same amount of reduction elsewhere, so that someone can sell credits to the bigger polluters. In this way, the incentives to cut emissions will be more obvious.

The pricing mechanism is both essential and difficult. Now it seems that there is a greater willingness to accept the so-called market approach, under which the carbon price provides adequate incentives. But in actual practice, there are many technical problems that need to be addressed on a macro level.

Another policy proposal recently raised in the United States is to introduce a carbon tax. This will also be an important issue for China in the future. In fact, we have been discussing it internally for several years.

How to set a price for each tonne of carbon emissions? Is it accurate? Is it in line with market supply and demand? If the tax is set too high or too low, people will blame the government. If the price is too high, certain traditional industries will face excessive costs, which could lead to inflation. If the price is too low, the total amount of carbon emissions will exceed the limit, and global warming can’t be controlled.

A carbon market is different from a carbon tax, because people expect the price in a carbon market to be determined by supply and demand, not the government.

Under a carbon trading mechanism, enterprises can sell carbon credits of as much as their reduction in carbon emissions. However, under the carbon tax mechanism, enterprises have to apply to the government, claiming their operations are beneficial and deserve certain subsidies. This could be challenging to the fiscal and tax system.

Carbon taxes will be included in total fiscal revenue. How to spend the money will need approval by legislators, so there’s not as much flexibility.

Eventually, China will form a unified national carbon market. Since climate change and carbon emissions are global issues, some market players should be able to sell their quotas in European and global markets. This means a globally interconnected or unified market might form in the future.

Since the 18th National Congress in 2012, China has made rapid progress in green development. As for today, the balance of green credit in China is more than 8 trillion yuan ($1.13 trillion), a relatively high level in the world. Another tool China has developed very well is green bonds. The current balance of green bonds is more than 600 billion yuan, of which 280 billion yuan were issued in 2018. The Shanghai and Shenzhen stock exchanges have opened channels for listing of companies in green industries.

Zhou Xiaochuan, former governor of the People’s Bank of China, is president of the China Society for Finance and Banking and honorary dean of the PBC School of Finance at Tsinghua University