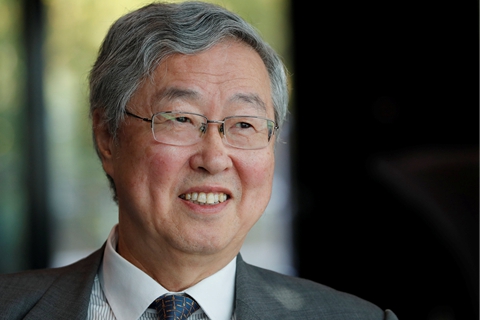 The normal functioning of the international monetary and financial system has been “disrupted by financial sanctions and other measures contrary to market rules,” Zhou said in a keynote speech at the Singapore Summit, organized by Temasek Foundation, a nonprofit arm of Singapore sovereign wealth fund Temasek Holdings.

“Trade disputes are seriously threatening global trade and economic growth,” he said, adding that the risk of chronic low inflation and low growth across the world is rising.

In July, the International Monetary Fund revised downward its 2019 world growth forecast to 3.2%, the lowest since the 2008 global financial crisis.

However, the World Trade Organization (WTO), which sets and enforces rules for the global trading system, faces multiple challenges. The WTO’s Appellate Body, which hears appeals of trade dispute decisions, could cease to function after one of the panel’s judges steps down in December. The panel should have seven members under WTO rules but now only has three — the minimum required to hear cases — because U.S. President Donald Trump has blocked new appointments to it.

“The WTO has encountered massive difficulties in the execution of its core functions, including dispute resolution, multilateral negotiation and supervision,” Zhou said, adding that trade sanctions imposed unilaterally by one WTO member against others have seriously undermined the authority and efficacy of the organization. He did not name the WTO member.

“Today, WTO rules fall short of addressing the challenges of the 21st century concerning economic globalization,” he said. “They have also been inadequate in terms of protecting the interests of developing countries, especially those that are relatively impoverished.”

A number of Asian countries are making efforts to create new free trade agreements to promote global and regional trade. For instance, China is promoting the conclusion of Regional Comprehensive Economic Partnership (RCEP) negotiations in the region, Zhou noted.

The RCEP involves the 10 members of the Association of Southeast Asian Nations plus six countries. When completed, RCEP member countries will form the biggest free trade zone in Asia, accounting for nearly half of the world’s population, one-third of global GDP and investment, and one-third of global trade.

If countries use the RCEP or the Comprehensive and Progressive Agreement for Trans-Pacific Partnership (CPTPP) to set up regional multilateral trade and investment rules, “I think it’s a great thing,” Zhou said at a dialogue following his speech.

“Asian countries can further align the standards of the RCEP with those of the CPTPP. Regional trade agreements can also provide important impetus to the WTO to advance its rules to reflect changes and advancements of today’s world,” Zhou said.

Zhou said that he hopes the RCEP and the CPTPP can one day expand to Europe, the Americas and Africa to provide a major boost to economic and trade efficiencies as well as investment opportunities.

Zhou’s speech is part of this year’s S Rajaratnam Endowment Dialogue, which was jointly hosted by the Singapore Summit and Caixin Media.

Zhou, 71, was China’s longest-serving central bank chief, having been governor of the People’s Bank of China from December 2002 to March 2018. Since last April, he has worked as a vice chairman of the Boao Forum for Asia, a nonprofit international organization headquartered in China’s southern island province of Hainan.