In Depth: How a ‘Mosquito Factory’ in Southern China Could Help Fight Disease 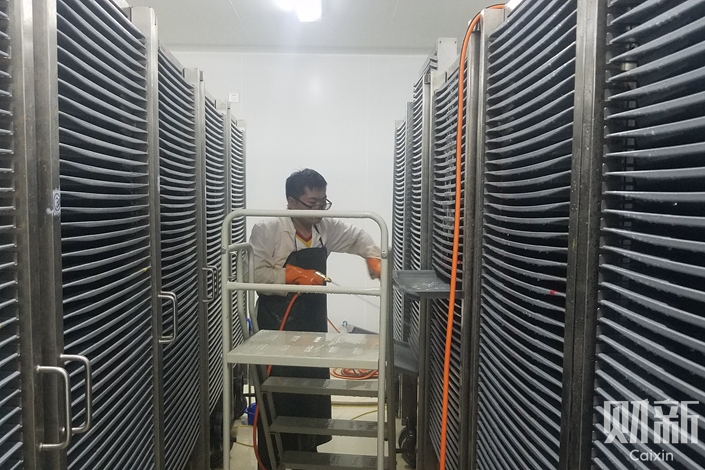 The world’s largest “mosquito factory” is hidden in a nondescript building in Guangzhou. The 3,500 square meter lab hatches millions of mosquitos each week for use in control efforts. Photo: Liu Denghui/Caixin

In a nondescript building in a technology center in the southern Chinese metropolis of Guangzhou, Guangdong province, a team of scientists has declared war on mosquitos.

It may seem odd, then, that their 3,500-square-foot workshop can produce 10 million of them each week. But these are no conventional mosquitos: They are programmed for insect genocide. Theirs is a suicide mission on a population level.

In humid southern China, thriving mosquito populations frequently give rise to deadly outbreaks of tropical diseases like dengue fever, Zika, and malaria. Scientists hope that by eliminating the “vectors” that spread the disease, the diseases themselves will be brought under control.

About 60 kilometers (37 miles) from the mosquito factory is Shazai Island, a three-square-kilometer (0.77 square miles) expanse connected to the mainland by 300-meter bridge. With mosquitos only able to fly about 100 meters, the island has proved an ideal testing ground for biological control methods.

A study published by the Chinese team in the international science journal Nature in July outlines their strategy for reducing the population of the invasive Aedes albopictus, or the Asian tiger mosquito. Male mosquitos grown in the factory are infected with a strain of Wolbachia, a type of bacteria that interferes with their ability to reproduce. The male mosquitos are released into the wild, where they mate with wild females. But the resulting eggs never hatch, ending the life cycle.

With consent from the majority of local residents, the researchers released the modified male mosquitos at designated sites. After the experiment, the population of Asian tiger mosquitos in the area had dropped by up to 94%.

The paper’s corresponding author is Zhiyong Xi, a microbiologist and molecular geneticist at Michigan State University and the director of the Laboratory of Tropical Disease Control and Prevention at Sun Yat-sen University in Guangzhou, who began studying the effects of Wolbachia on male mosquitos in 2005. He joined the University of Kentucky in 2001 to begin work on a doctorate on a mite-borne disease common in southern China, but his research soon diverted to Wolbachia. Researchers had previously suggested using the bacteria to inhibit mosquito breeding, but it was easier said than done.

It would be two years before Xi’s research made real progress. While completing his post-doctoral work he and his team published four papers, including one in top journal Science. That study found that if one-fifth of a group of mosquitos were infected with Wolbachia, all mosquitos in the next seven generations were also infected.

Their research came at an important time. Traditional chemical insecticides are increasingly shunned amid concerns about insects developing resistance and calls for environmental protection. Insecticide programs are also hard to implement, explains Gregor Devine, an associate professor at the Mosquito Control Laboratory at QIMR Berghofer in Australia who was unconnected with Xi’s research. “Appropriately trained teams must gain access to all yards and properties where the mosquito might be, identify all aquatic habitats and achieve high coverage of habitats with insecticides.”

That’s one reason biological control techniques are receiving more and more attention. Mosquitos are a significant threat to life. The World Health Organization (WHO) estimates the mosquito-borne trio of malaria, dengue and yellow fever together kill several million people annually and infect hundreds of millions. Bill Gates, the billionaire co-founder of Microsoft who pivoted to philanthropy after making his fortune, once wrote that mosquitos are the world’s “deadliest” animal in light of the diseases they carry.

Liu said changes in the global climate, environment, population mobility, and lifestyles have made battling mosquito-borne diseases increasingly difficult. Meanwhile new viruses are often discovered. The Zika outbreak in 2015 caused an international public health emergency — the infection of pregnant women was linked to babies being born with underdeveloped brains.

Mosquito habitats too are expanding along with epidemic intensity and frequency. Dengue fever has now spread as far north as East China’s Shandong province. Jiangxi province recently experienced a sudden dengue outbreak with more than 600 confirmed cases of the virus, up from only three cases in 2017.

Vaccines, one of the most useful tools in controlling the spread of disease, are difficult to develop for mosquito-borne diseases. And mosquitos aren’t easy to eliminate.

Mosquito resistance to insecticides is also common in China, Liu told Caixin previously. A dengue outbreak in Guangdong in 2014 saw more than 40,000 people infected, and chemical controls were shown to have a limited effect.

“At that time, many people asked why the control of the epidemic was not better. Later, I sent staff to test drug resistances,” he recalled. “We used many kinds of chemicals. The whole city of Guangzhou came up with “red” areas, where the chemicals were basically ineffective.”

Sterilizing mosquitos so they can’t breed is a biological means of controlling the spread of mosquito-borne disease. The technique used by Xi and his team is to inject the bacteria Wolbachia into mosquito embryos. Once they hatch, the team disposes of as many females as possible, and the male mosquitos are set loose to mate with wild females.

“Wolbachia-infected males, when they mate with wild females, result in no offspring. So if you swamp the wild population with these infected males, you can ‘crash’ the population,” explains Professor Devine.

The problem, explains Devine, is if you accidentally release females at the same time, mating between infected males and infected females will give rise to fertile infected offspring. “So you could ruin your strategy of eliminating the species by simply replacing the wild population with a Wolbachia-infected one.”

To prevent this, a crucial additional step sets the Chinese team’s research apart from other similar work with Wolbachia: After they are infected, the remaining mosquitos are subjected to low-dose radiation that would sterilize any female mosquitos which are accidentally left in the population — but not the males.

Mosquitos have a life cycle of about one month. Once lain, their eggs hatch into larvae after about a week, and are adults a little around a week later. Mosquitos from Xi’s factory will survive for about 10 to 15 days after they are released as adults.

Devine told Caixin the method had another advantage: “That Wolbachia-infected population is often unable to transmit disease — so the mosquito is still there, but the risk of disease transmission is diminished.”

Xi received permission to perform field tests from the United States and Australia in 2012. It was much more troublesome to obtain approval from China’s Ministry of Agriculture and Rural Affairs for the experiments in Guangzhou, since the concept of “mosquito control” is not well-understood in China. One of the major obstacles was getting public support in the areas they hoped to carry out the experiments.

In July, Xi’s latest Wolbachia experiment was published in the science journal Nature. The data showed that the number of mosquitos decreased by more than 94% in the two test areas from 2016 to 2017.

More experiments are underway. In August of last year, Xi helped establish another mosquito factory in Merida, Mexico — a joint collaboration between Michigan State University and the Autonomous University of Yucatan. This project, Xi said, received nearly full support from local communities, which he suspected is due to the high rates of dengue fever and Zika in the area.

The race to commercialize

Liu noted that the problem of mosquitos developing resistance to chemical insecticides is impossible to avoid. Some mosquitos can develop resistance within six months due to overuse.

A number of organizations are researching biological methods for mosquito control, including Google’s parent company Alphabet, Oxford Insect Technologies (Oxitec), and the World Mosquito Program. In March 2016, the WHO recommended two kinds of Wolbachia technologies and an Oxitec gene modification project for pilot projects.

But Oxitec hit ethics trouble. In November 2009, the company took the lead in conducting the first release tests for genetically modified mosquitos in the Cayman Islands. At an academic conference a year later, the company reported that the number of mosquitos had dropped by 80%. However, it later emerged that the experiment was conducted with cooperation from the local government, but without the knowledge or consent of the public.

In December 2010 and November 2018, Oxitec terminated projects in Malaysia and Florida due to public opposition.

Though in the eyes of the public, the Wolbachia method is safer than genetically modified mosquitos, some have expressed concerns about the spread of Wolbachia to other insects, the consequences of which are unknown.

Several independent researchers contacted by Caixin said the technique was unlikely to have unintended negative impacts. “The approach is highly specific to Aedes albopictus, which is an invader of many tropical and sub-tropical regions around the world, and therefore is not believed to have any negative effect on ecosystems,” said Dr. Leon Hugo, who works under Professor Devine at QIMR Berghofer.

Xi believes that such mosquito products have reached a stage now where they can and should be commercialized. Commercialization will push the researchers to improve their technology and reduce costs, he believes.

He also hopes to form alliances with major pharmaceutical companies such as Bayer AG, which could provide funds and a downstream network to help promote the products.

Another obstacle to commercialization is showing proof that eradicating mosquitos does result in a lower incidence of the diseases they carry. “In theory, dengue fever is transmitted by mosquitos. Without mosquitos, there would be no dengue fever. But if you don’t make mosquitos disappear completely, it’s still a question. How low is low enough?” Xi said.

“Say we suppress 90% (of the mosquito population). Is the remaining 10% enough to support a large epidemic of the disease?” Industry experts want to see declines in new disease cases, Xi explained. But compiling evidence means specialized trials — and great costs.

Xi hopes that they will be able to carry out such trials from the factory in Mexico, since outbreaks of dengue in Guangdong are unpredictable. The province saw 474 cases in 2012 and then more than 45,000 cases in 2014. By 2016, there were only 544 cases, according to the provincial CDC. The incidence of dengue in Mexico is more stable.

Devine says Xi’s method may be a good strategy for eliminating small pockets of mosquitos and populations that are at an early, manageable stage. But even on the tiny islands tested, he said the populations were not completely eradicated, and “when and if the mosquitos re-invade from elsewhere, you have to start again.”

“Those mosquitos will be back sometime, either from those local remnants or from immigration from neighboring areas,” he said. “It’d be interesting to know what the one-off and on-going costs would be for a town or a city with high densities of mosquitoes and lots of mosquito immigration.”