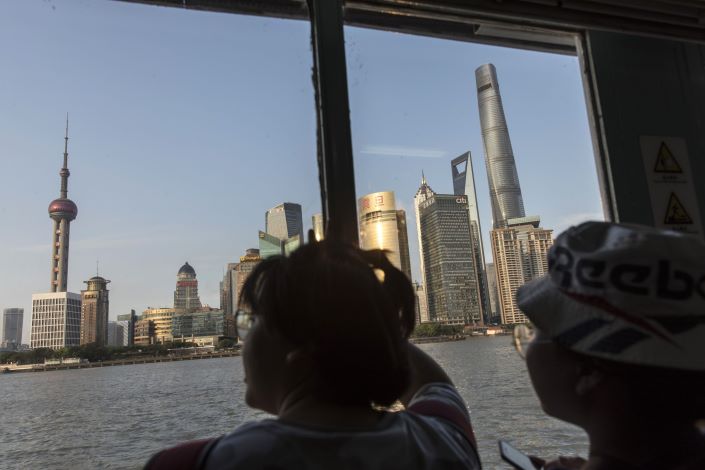 Shanghai's main Lujizui financial district as seen from a boat on the Huangpu River. Photo: Bloomberg

(Bloomberg) — China is telling its banks to distribute excess provisions for soured loans to investors as part of attempts to curb accounting malpractice, sparking a rally in some local financial company stocks.

Banks with provisions exceeding 300% of their nonperforming-loan balances would be seen as having “a tendency to hide their profits” and would need to distribute reserves beyond that amount as dividends, according to draft rules released Thursday by the Ministry of Finance. The loan-loss provisions have been long seen as a key swing factor for earnings. The ministry is seeking public feedback on the rules through Oct. 26.

China’s financial regulators are pressing on with a two-year campaign to reduce risks in the world’s largest banking system by increasing fines on transgressions including inflating deposits, understating bad loans and misusing client funds. While the bad-loan coverage ratio averages 191% across the industry, including at state-owned banks, the buffer stood at 461% at private banks at the end of June, official data showed.

“In order to reflect the true operating results of financial entities and prevent them from using provisions to adjust profits, we will regulate the practice of significantly over-provisioning,” the ministry said in the draft rules.

“There is a bit of a tussle between banks hoping to keep these funds and regulators urging them to shoulder more social responsibility,” said Yang Wei, a Chengdu-based fund manager at Longwin Investment Management Co. “The latest draft reflects a further push from the authorities and the market is reacting positively — they expect more transparency and profit distribution.”

The banking regulator last month identified a slew of wrongdoings after on-site checks at some of the nation’s smaller lenders, prompting it to call for tougher supervision. The sector is particularly strained after the government shocked the market by taking over Baoshang Bank Co. in late May, and investors have started to price risk differently among weaker and stronger lenders.

With the new rules, “more profits will be shown on banks’ financial statements,” said Zhang Gang, a strategist in Shanghai at Central China Securities Co. “It would boost shares in the short term for sure. But this is just a one-off change and I don’t think it would be a long-term boost.”

Under the latest draft rules, banks and insurers’ fixed assets, including developments under construction, would be capped at 40% of their net assets to ensure the companies have enough liquid assets and refrain from over-investment in real estate.