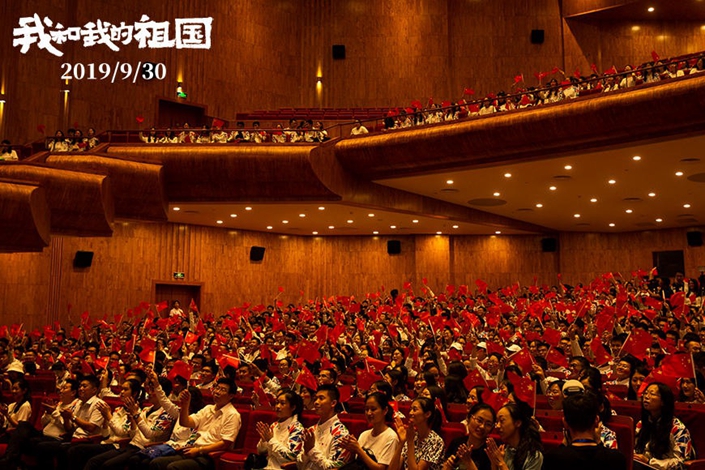 The films “My People, My Country,” “The Climbers” and “The Chinese Pilot” will make up nine of every 10 screenings around the nation on Oct. 1, EntGroup said, following Beijing’s call to promote such films. Photo: Mtime

After a disappointing first-half for the domestic movie industry, three nationalistic films timed to cash in on the upcoming 70th anniversary of the People’s Republic of China have reported strong ticket sales.

“My People, My Country,” “The Climbers” and “The Chinese Pilot” — all set to open the day before the Oct. 1 anniversary — had together booked more than 300 million yuan ($42 billion) in advance sales on Friday, according to industry tracker EntGroup. By comparison, recent animation smash “Nezha” booked 139 million on its opening day.

Those three films will make up nine of every 10 screenings around the nation on Oct. 1, EntGroup said, following Beijing’s call to promote such films.

“My People, My Country” is an upbeat look at China’s national achievements since the People’s Republic was established. “The Climbers” is a mountaineering film starring Jackie Chan and Zhang Ziyi in an attempt to climb Mount Everest. And “The Chinese Pilot” is a biographical drama about an emergency landing in Sichuan province.

After years of breakneck growth, China’s box office booked the first half-year ticket revenue drop in eight years in the first half of the year, when revenue slid 2.7% to 31.2 billion yuan, according to EntGroup.

Industry analysts attributed the cooling market to the mismatched growth in facilities and quality content. Chinese film production rose 45% between 2012 and 2018, compared with a more than five-fold increase in the number of screens, official data showed.

Domestic studios are throwing cash at popular patriotic flicks to make back their losses — 48 studios joint-produced and invested in “My People, My Country,” while “The Climbers” had 27 producers and “The Chinese Pilot” had 17.

Such films have been performing well in China of late. “Wolf Warrior 2,” released in 2017, earned 5.6 billion yuan at the box office to become China’s largest-ever grossing film. “Operation Red Sea,” which had similar themes, earned 3.65 billion yuan in 2018.