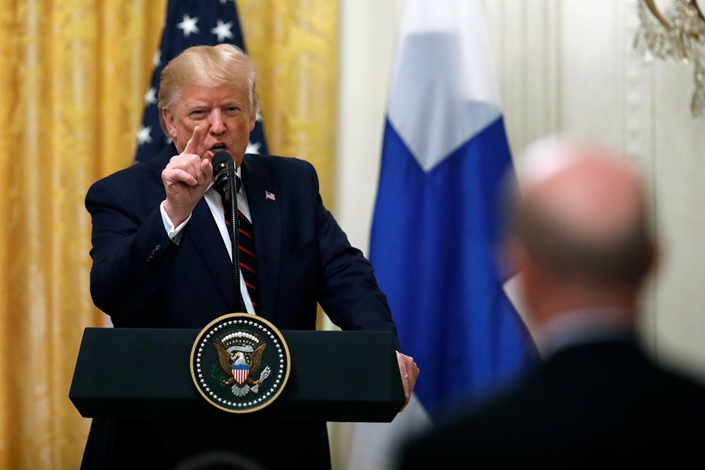 This week is an extraordinary time for top-level Chinese officials to head to Washington for a new round of trade talks with their American counterparts, as Donald Trump’s presidency is under attack.

Facing an impeachment inquiry, President Trump shows no sign of backing down from his tough positions on China. “I have a lot of options on China. But if they don’t do what we want, we have tremendous power,” he said on Thursday when asked by reporters about whether the U.S. plans to delist Chinese companies from U.S. stock markets.

Surprisingly, Trump then publicly called on China to investigate his Democratic opponent, former vice president Joe Biden — a request similar to the one he made in a phone call with Ukrainian President Volodymyr Zelensky on July 25, which led to U.S. House Speaker Nancy Pelosi launching an impeachment inquiry on Sept. 24.

Although it looks like Trump wants to drag Beijing into his impeachment drama as a distraction, it is also quite obvious that he might actually be trying to warn China not to take advantage of the inquiry for any possible trade leverage.

Clearly, China will not take the bait by linking trade talks with the impeachment; but it is still worth asking whether it could have any impact on the talks as the two threads overlap from now on.

Following Trump’s public appeal, Chinese Foreign Minister Wang Yi was quoted by nationalistic Chinese newspaper Global Times on Friday, saying that “China will not interfere in the internal affairs of the U.S. and we trust that the American people will be able to sort out their own problems.”

Political realities in the U.S. are not in favor of a workable impeachment either. A sandbox play would show that the U.S. House, currently controlled by Democrats, has the simple majority needed to successfully impeach Trump; but when the motion proceeds to the Republican-controlled Senate, Democrats just don’t have the required two-thirds majority needed to actually convict and remove the president.

In other words, Trump will survive. Only two presidents have been impeached in U.S. history: Andrew Johnson in 1868 and Bill Clinton in 1998, both of whom were acquitted after about four months. Richard Nixon resigned in 1974 to avoid being impeached.

However, my questions are simple — has the inquiry already handed Beijing extra leverage to gain more time, or at least a psychological upper hand in the negotiation? Could it undermine the U.S. side’s ability to press ahead their tough demands? And will it inevitably contribute to a delay in a final trade deal even beyond the 2020 election?

A source familiar with Chinese government thinking told me that Beijing has been preparing for the possibility of negotiating a final deal with Washington beyond the next presidential election because many of the Trump administration’s demands are unacceptable.

The source said that the White House would change its course in the trade war only if the U.S. economy is in serious recession before next year’s election. And it will be difficult for Beijing to respond in any way to the impeachment, which would be part of the U.S.’ domestic affairs.

John Holden, a senior director of China practice at Washington-based consulting firm McLarty Associates, said that the impeachment proceedings will be a distraction but the factors that affect American and Chinese calculations about a trade deal have not really changed. “Both sides want a deal, and both sides need a deal that can be accepted domestically.”

He suggested Beijing should be focusing on the practical commercial issues that are driving the two countries apart, and coming up with an agreement that effectively addresses them.

“We are still a long way from the impeachment of President Trump,” Dennis Wilder, the managing director and a senior fellow for the Initiative for U.S.-China Dialogue on Global Issues at Georgetown University, told me. “Even if the House votes for impeachment, it is still highly unlikely that the Republican controlled Senate would vote to impeach.”

Wilder said that the two sides still have “far more” to do to hammer out a trade deal that Trump could approve and declare as a “victory” to ensure his reelection. He also agreed that the state of the U.S. economy will be a major factor in his decision making.

“In sum, while the impeachment inquiry may provide a bit more incentive for the President to finish a deal, there remain other far more determinative factors.”