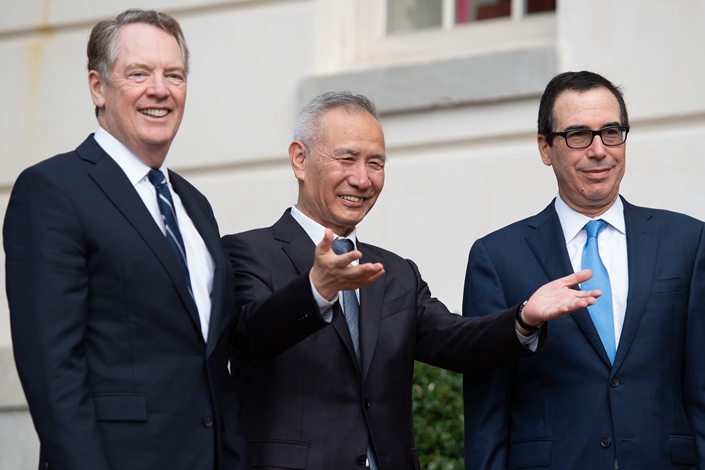 You may have settled nine points of a 10-point agreement, but until you deliver the most difficult one things can always backtrack — with parties pressing for further concessions on the previous points in order to secure the last.

Will that be true of the current U.S.-China trade talks? If so, there could be real problems ahead.

There have been positive noises from both Beijing and Washington after they agreed a hard-won first phase deal in the U.S. capital last week. The two sides had failed for a year to ink a comprehensive deal and the talks had collapsed in May. The only path through the impasse was to reach a precursor deal, before moving on to the thorniest issues.

Now, negotiations have been cut into three phases. And both parties appear willing to take the unusual step of signing a deal after each phase is completed. Phase One was the easiest to reach while Phase Three, if we get that far, will be the hardest.

Both sides announced “substantial progress” after the latest round of talks, and the two presidents are expected to hold a signing ceremony for Phase One as early as the APEC summit scheduled on Nov. 16 to 17 in Chile. There’s agreement on a number of issues, including China’s increased purchase of American agricultural products, “almost a complete agreement” on transparency of China’s foreign exchange rate policy, access to China’s financial markets for American firms, and a “largely agreed and workable” dispute settlement mechanism.

We don’t yet know when the first deal will come into effect. But the phase-by-phase approach creates other uncertainties.

Multiple issues the U.S. has long complained about did not emerge publicly during this round of talks, including China’s generous subsidies to state-owned enterprises (SOEs), alleged intellectual property theft, and the huge trade deficit between the two countries.

If negotiators fail to deliver resolutions on these tough issues, then the agreed Phase One and Two could be voided. This possibility cannot be ruled out; Beijing and Washington should move together cautiously.

It’s also worth noting that China has not endorsed Trump’s wording around reaching a Phase One deal. Chinese Commerce Ministry only said “the two sides also discussed the arrangement for future consultations, and agreed to make joint efforts toward eventually reaching an agreement.”

At a June press conference in Beijing, the commerce ministry’s spokesman, Gao Feng, actually used the words “Nothing is agreed until everything is agreed.” He was responding to the U.S. claim that talks had collapsed in May because China had backtracked on its promises. Gao accused the U.S. of dishonesty and of unilaterally increasing tensions. “If the U.S. insists on unilateralism and wants to force China to yield, this will never succeed,” he said.

But Trump looks to be in urgent need of a deal. He said on Friday that he wants a “fast and clean” agreement that does not need the congressional approval. “One of the great things about the China Deal is the fact that, for various reasons, we do not have to go through the very long and politically complex Congressional Approval Process,” he tweeted. “When the deal is fully negotiated, I sign it myself on behalf of our Country. Fast and Clean!”

If Trump thinks he will not need congressional approval for such a trade deal, he is wrong. His confidence seems to come from a piece of “fast-track” legislation, the Trade Promotion Authority (TPA), negotiated between his predecessor, President Barack Obama, and the previous 115th U.S. Congress, to facilitate the talks of Trans-Pacific Partnership (TPP), then the mega-trade deal covering 12 Asia-Pacific countries.

That legislation allows trade deals to be brought to a direct vote without lengthy debate in Congress — a fast-track mandate that can save tremendous time. But it does not skirt such a vote. Trump’s White House had successfully sought an extension of the fast-track mandate, but any deal will still be subject to a Congressional vote, because the authority to approve trade deals with foreign governments lies in the Congress.

If the U.S. Congress does not like the final deal and ultimately vetoes it, it will be as though nothing was agreed at all.

This story has been corrected to say Gao Feng is a spokesperson for the Ministry of Commerce.