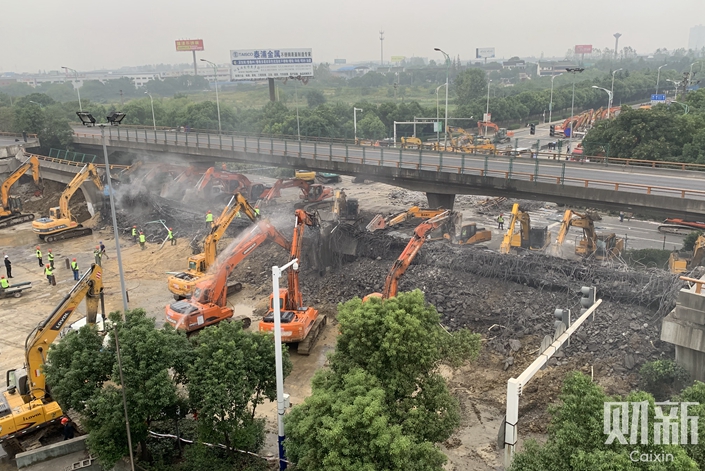 A woman and her 5-year-old daughter are among three dead after a highway road bridge collapsed Thursday in Wuxi, in East China’s Jiangsu province.

Local police said the incident occurred around 6:10 p.m. on the 312 National Highway. The bridge swayed and collapsed, destroying three cars including one that was parked.

A government official at the scene said that the 31-year-old mother, who was a teacher, and her daughter were crushed in their yellow car as the overpass came down. Another man who died was also a teacher, rescue workers said. Two others were taken to hospital with injuries, Caixin understands.

Emergency crews, engineers and rescue personnel worked throughout the night.

The owner of a nearby dumpling restaurant who witnessed the collapse told Caixin there had been many large vehicles on the bridge at that time. One of them was a truck carrying six huge coils of steel, which the man, surnamed Yu, guessed had caused the bridge to fall towards that side.

According to photos from the scene, what Yu saw were hot-rolled steel coils. One of the coils had a certificate affixed to it, stating that it was manufactured by Rizhao Iron and Steel Holding Co. Ltd. and weighed 2,853 kilograms (6,290 pounds). If all six coils weighed that much the truck would have come in at 171 tons, which is considered overweight.

A bridge expert who was on the scene as part of rescue efforts said that the collapse should not have been caused by a single overloaded vehicle. The overloaded truck found at the scene had a load of about 170 tons, but the bridge should be able to withstand at least 4,500 tons of pressure, he said.

The bridge in Wuxi was a single-column pier, a common style of urban bridge where one column supports the superstructure. The expert said the bridge fractured between two piers, but further analysis was needed to determine whether the truck caused the fracture, or if it had been there prior to the incident.

Bridge and road collapses are not uncommon in China, and do often occur due to overloaded trucks. Bridge experts have previously told Caixin that many of the Chinese bridges that have collapsed in the past have actually been up to construction and design standards. Overloading of trucks and violation of traffic rules are a widespread problem in China.

A number of personnel at the scene told Caixin that the truck involved came from a company called “Successful Logistics.” Only one of three enterprises registered with this name was still in operation and is based in Lianyungang, Jiangsu, some 400 kilometers (249 miles) away from Wuxi.

A local enterprise called Wuxi Success Transport Co. Ltd., is based only 20 kilometers (12.4 miles) from the collapsed bridge. Reached by telephone, an employee at the company said that he did not know whether the truck had come from the Lianyungang firm and hung up.

The Wuxi city government has formed a task force to investigate the cause of the collapse.