Automation Specialist Gets Turbocharge From Campaign to Eliminate Toll Booths

By Fang Zuwang and Yang Ge 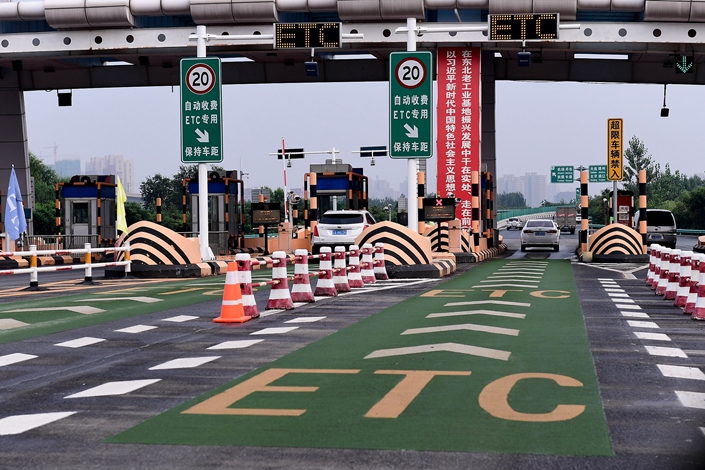 A top supplier of equipment that allows cars to automatically pay highway tolls without stopping expects its profits to soar by a factor of more than 200 in this year’s third quarter, fueled by demand under a Beijing campaign to eliminate all toll booths by the end of 2020.

Shenzhen Genvict Technologies Co. Ltd., whose main staples include on-board tags that cars use to have tolls deducted electronically, said it expects its third-quarter profit to rise by between a factor of 214 and 256 from the year-ago period, according to a statement (link in Chinese) filed to the Shenzhen stock exchange late on Sunday.

The bullish forecast sparked a rally for Genvict’s China-listed shares, which rose by their daily 10% limit on Monday. The stock has rallied 25% since late September as investors expect the company to gain major new business from the latest Beijing campaign.

China’s heavy government oversight frequently drives such rallies, as well as similar busts, in a country where everything was previously state-owned and the large field of remaining state-run firms still works hard to help Beijing achieve its objectives. Industries like solar power and electric vehicles have boomed on the back of Beijing plans to build up the sectors, only to go through painful consolidations later when government support waned.

The latest policy fueling Genvict and its peers was announced in May, when the general office of the State Council disclosed a plan that aimed to eliminate all toll plazas by the end of 2020. Such plazas are common in China, as builders of the nation’s thousands of kilometers of highways built over the last three decades seek to recoup their investments. But they also often lead to traffic congestion.

Genvict’s huge jump in third-quarter business was fueled by two major orders from provincial-level highway operators in East China, one in Jiangsu province and the other in Shandong province. The two orders totaled at least 15.75 million tags. Based on a value of about 60 yuan ($8.47) per tag, the orders alone would be worth around 940 million yuan, or 1.5 times Genvict’s total sales for all of 2018.

Use of the technology has accelerated sharply since the new campaign was first announced. China had just 77 million users of the technology, called ETC, at the end of last year. But the number had grown to 130 million by Sept. 18, according to data from the Ministry of Transport, one of the main agencies overseeing the campaign. It has set a target of 180 million users by the end of the year.

To achieve that, the ministry has signed an agreement with 12 of the nation’s leading banks to promote the technology, including incentives like free installation.