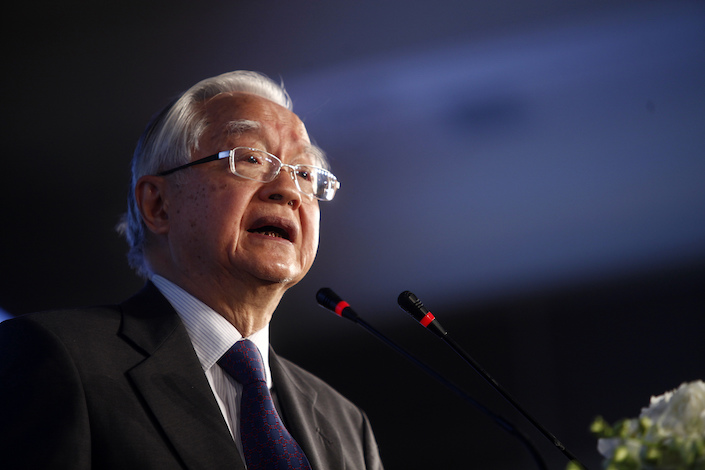 China has spent the past 70 years searching for its future path and striving to cope with various challenges. An early system built on the model of the Soviet Union cost the country’s economy heavily and caused great difficulties for its growth.

The achievements we see today are results of reforms to push forward marketization and rule of law that began in 1978.

Thanks to the reform and opening-up, China’s gross domestic product (GDP) surged from 367.9 billion yuan ($51.9 billion) in 1978 to 82.7 trillion yuan in 2017. Annual growth of the economy averaged 9.5%, outpacing the roughly 2.9% global growth rate during the period. China’s share of the world economy also expanded from 1.8% to 15.2%, and its contribution to global growth has exceeded 30% for many years. China’s total trade volume surged from $20.6 billion annually to $4 trillion; its cumulative use of foreign direct investment topped $2 trillion and its direct investment overseas amounted to $1.9 trillion.

China has come a long way to this point, and it is time to review the journey. History offers lessons that will help us cope with challenges we face as we continue to pursue the long-sought dream of building China into a prosperous, democratic, civilized and harmonious country.

It was a rough journey over the past 70 years with many twists and turns as China fought to find a pathway for development.

In the early 1940s, shortly before the establishment of the People’s Republic, the Communist Party set a reform roadmap for a new China to take two steps toward achieving the goal of building a socialist country.

Mao Zedong wrote in a 1940 essay that China should first set up a new democratic society during which the country would transform from an agrarian economy to an industrial one, and then evolve into a socialist country. A new democratic society should allow the existence of capitalist-style private ownership, while major financial, industrial and commercial entities would be controlled by the state.

Pursuing this plan, the party in 1945 officially announced that China would spend 10-15 years under a new democratic system. In 1951, then-Vice President Liu Shaoqi said at a politburo meeting that China set a long-term strategy of devoting 10 years to developing its industrial and agricultural sectors to empower the economy before shifting into a socialist system.

Despite the Korean War, China’s economy recorded strong growth between 1950 and 1952 under this strategy. In three years, China’s total industrial and agricultural output surged from 46.6 billion yuan to 82.7 billion yuan, with annual growth of more than 21%. Gross national income rose from 35.8 billion yuan to 58.9 billion yuan.

In 1953, Mao put forth the concept of the "general line for the transition period," referring to the period between the founding of the PRC and the basic completion of the socialist transformation.

“The party's general line and general task for the transition period is to gradually accomplish the country's industrialization along with the socialist transformation of agriculture, handicrafts and capitalist industry and commerce over a relatively long period of time," Mao said at a Politburo meeting that year.

In 1955, Mao proposed to accelerate the socialist transformation in the agricultural industry. The next year, none of the country’s farmers was self-operating. In October 1955, Mao called for nationalization of the industrial and commercial sectors in preparation for communism. Private entrepreneurs then rushed to invite the state to acquire their businesses.

Under the overwhelming political drive, China basically completed the socialist transformation of all sectors by the end of 1956 and eliminated almost all nonsocialist elements from its economy. The entire economy was under control of the state or collectives, setting up a Soviet Union-style economic system with centralized planning.

But the flaws of the Soviet system quickly exposed shortly after the death of Stalin and appeared in China as well, forcing party leaders to seek reforms. There were heated discussions on how the centrally planned economy should be reformed, and some voiced the need to introduce more market forces, including then-Vice Premier Chen Yun and the late economists Sun Yefang and Gu Zhun.

Mao also acknowledged the flaws of excessive central control. In a 1956 speech, he said centrally concentrated power restrained local initiative and reforms should be made to decentralize some administrative powers to local government and state companies.

But rising waves of political movements and blind enthusiasm for rapid industrialization soon overwhelmed the country and set off the Great Leap Forward campaign. In 1958, the party revised its five-year plan with ambitious goals to expand agricultural output by 2.7-fold, compared with the previous goal of 35%. Annual steel output was set to rise to 80 million tons in 1962 from the previous target of 12 million tons. The unrealistic ambitions led to social and economic disasters at the cost of massive resources and people’s lives.

The craze gradually calmed by 1960, and it took three years for the government to stabilize the country’s social and economic operations.

But the peaceful recovery didn’t last long as the sweeping Cultural Revolution kicked off in 1966 and dragged the country into a decade of turmoil. During the 10 years, China’s economy staggered while technological development and education went into reverse. A census in 1982 found that 230 million Chinese, or one-fourth of the population, were illiterate or semi-literate.

It wasn’t until the collapse of the “Gang of Four,” putting an end to the 10 years of social chaos, that the country got back on track. Officials sent abroad by the government were surprised at the huge differences and realized how much China had fallen behind, prompting calls for fundamental reforms.

As the chief architect of China’s reforms, Deng Xiaoping declared that China must open itself to the outside world to change its situation after 20 years of isolation. The lessons of the Cultural Revolution disaster were too painful, he said.

In December 1978, the 3rd Plenary Session of the 11th Central Committee of the Communist Party was a pivotal meeting that shifted China’s focus to economic construction and opening-up, raising the curtain on profound reforms.

Searching for a path to reforms

Despite consensus on the need for reforms to allow market forces to play their role, opinions differed on how changes should be made. Economists widely argued that China should shift its planned economy to a market economy with some macro control, but others said a more prudent approach should be adopted by allowing administrative forces to indirectly control economic activities.

The second approach won the endorsement of the leadership at the time and became the mainstream approach in reforms between the late 1970s and early 1980s. That set off the push to grant greater autonomy to state-owned enterprises (SOEs). The effects of the reforms showed up immediately as SOEs’ productivity increased quickly. But the limits also emerged as SOEs blindly expanded production without careful scrutiny and fair competition. It thus caused China’s largest budget deficit, an inflation surge and economic chaos.

The setbacks frustrated reforms, and in 1982 the party again emphasized the importance of keeping the economy under central planning.

It wasn’t until October 1984 that China’s market-oriented reforms regained steam after the party passed a key resolution to push forward such changes. But the implementation of the reform resolution hit speed bumps in the following years as administrative intervention remained ubiquitous in the economy. The lagging reforms fueled corruption and severe inflation, leading to economic and political turmoil in the late 1980s. China’s economy suffered three years of recession between 1989 and 1991.

The turning point for reviving China’s commitment to reform came in early 1992 when Deng Xiaoping paid a visit to several southern Chinese cities and made crucial remarks encouraging reforms.

“It will only be a dead end (for China) without reform and open-up,” Deng said.

Deng’s remarks set the tone for China’s reform efforts and ignited public enthusiasm. In 1992 at its 14th National Congress, the party set a clear goal of creating a socialist market economy.

Specific and concrete reform measures followed, and in 1997 the party for the first time addressed the sensitive topic of ownership structure in its key reform plans. “Adjusting and improving the ownership structure” was listed as the top reform task at the party’s 15th National Congress that year, along with a mandate to expand socialist democracy and enhance rule of law.

Reform efforts since 1992 set the stage for China’s economic miracle in the following decades and enabled the country to grow into the world’s second-largest economy in 2010.

Despite the widely recognized achievements of China’s economic transformation, the legacy of the planned economy has continued haunting some sectors, brewing corruption, inefficient growth and financial risk.

Ironically, the problems resulting from inadequate reforms are often used by some people as excuses to oppose further reforms. In the first 10 years of the 21st century, voices for strengthening state controls on markets grew louder, and a private business retreat appeared in some sectors.

Nevertheless, the party’s 18th National Congress in 2012 pushed back against doubts over reforms and affirmed the commitment to continue deepening them, setting off a new era of comprehensive and systemic restructuring. Under the reform resolution approved by the 18th National Congress, coming reforms will not be limited to the economic arena but will expand into other social arenas.

“The overall goal of comprehensively deepening reforms is to improve and develop the socialism system with Chinese characteristics, while modernizing China's system and capacity for governance,” according to the resolution.

The reform document made clear that the core issue of economic system reform is to properly handle the relationship between government and markets and allow markets to play the decisive role in resource allocation. The statement set the key principle for China’s following reform efforts.

A series of detailed reform policies have been issued since the 18th National Congress, including those regarding rule of law, pricing mechanism reform, fair competition and protection of intellectual property rights. According to President Xi Jinping at a ceremony commemorating the 40th anniversary of reform and opening up last year, a total of 1,600 plans have been launched covering all aspects of reform.

With all the reform plans in place, the next question is how to enhance execution and put the right policies into practice. Setting up the right resolution and most feasible plan is only the first step in the grand task of reforms. There will inevitably be challenges and resistance from old ideology and vested interest as reforms unfold. Deepening reforms is a complex and systemic project that requires support with all kinds of knowledge.

Looking back at China’s 70-year journey, the pursuit of reforms has been lauded for the wellbeing it brought to the public but also faced questions and doubts. Sometimes, the momentum of reforms was stagnant or even negative. But fortunately, the country has kept its main direction toward reforms unchanged.

There is no end to pursuing reforms, and we shall continue the efforts together.

Wu Jinglian, an 89-year-old researcher at the Development Research Center of the State Council, is one of China’s most influential pro-market economists.