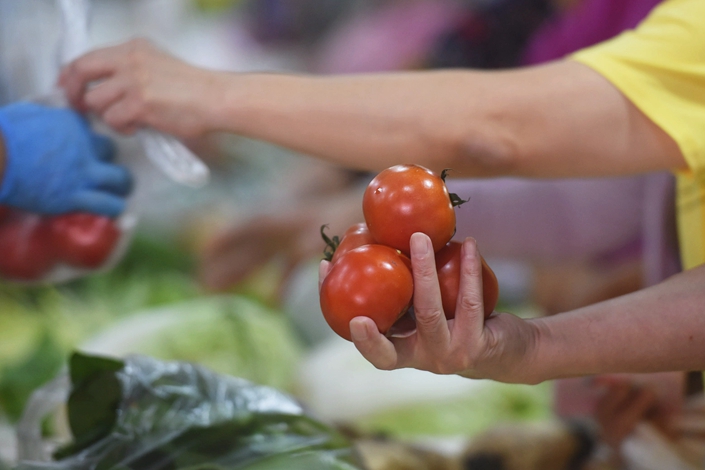 The consumer price index (CPI), which measures the prices of a select basket of consumer goods and services, edged up 0.2 percentage points to a 3% year-on-year rise in September, according to data (link in Chinese) released Tuesday by the National Bureau of Statistics (NBS).

The reading has not been this high since November 2013 (link in Chinese) and exceeded the average forecast of 2.8% growth by a Caixin poll of economists.

Faster-rising food prices, especially pork, were the major drivers of CPI growth. The average pork price rose 69.3% year-on-year in September, up from 46.7% the previous month and the fastest growth since August 2007. That contributed 1.65 percentage points to CPI growth, NBS data shows.

China’s pork industry has been decimated this year by a deadly epidemic of African swine fever which has spread to every provincial-level region of the country. Last month, the number of live pigs plunged 41.1% year-on-year, according to data (link in Chinese) from the Ministry of Agriculture and Rural Affairs. The Chinese government released 30,000 tons of pork from state reserves to ease pressure on supply in September, according to (link in Chinese) the Ministry of Commerce.

The substantial CPI growth does not suggest an uptick in domestic demand, however, as core CPI — which excludes more-volatile food and energy prices and which economists say better reflects long-term inflation trends — remains at a more than three-year low of 1.5% growth, NBS data shows.

Last month, China’s producer price index (PPI), which tracks the prices of goods circulated among manufacturers and mining companies, declined 1.2% (link in Chinese) year-on-year due to falling oil and raw material prices, a further drop from its 0.8% contraction in August, according to NBS data. The reading reflects the average forecast in the Caixin poll and marks the lowest since July 2016.

In the view of ANZ Research economist Xing Zhaopeng, the widening divergence between China’s CPI and PPI growth stems from supply-side reforms which have reduced supply and caused some prices to surge, while prices in downstream sectors have remained relatively stable.

Economists from Nomura International (Hong Kong) Ltd. predicted in a note that consumer inflation would remain above 3% in the coming months on higher pork prices while the PPI would turn more negative on weakening domestic demand, falling energy prices, and other factors.

As for the impact on monetary policy, economists from research firm Capital Economics said in a note that “rapid food price inflation is unlikely to be a barrier to monetary easing.” They anticipate further monetary policy loosening in the next few quarters as factory deflation deepens.