China Has ‘No Difference’ With Trump on State of Trade Talks 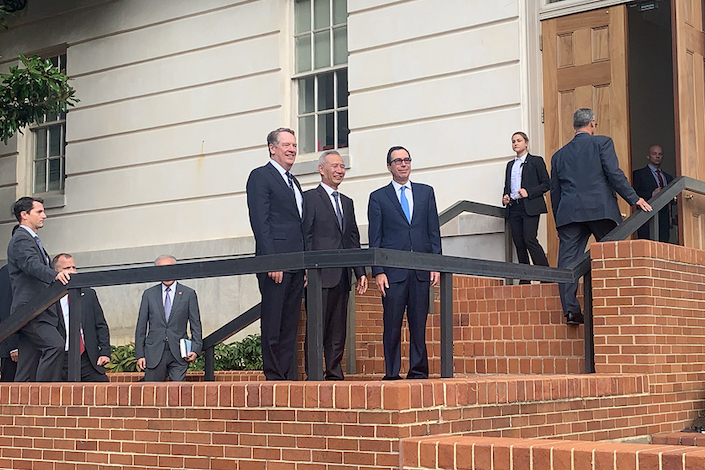 Chinese Vice Premier Liu He (central) arrives at the Office of the U.S. Trade Representative Thursday morning for the 13th round of trade talks. Photo: Zhang Qi/Caixin

China's Foreign Ministry confirmed Tuesday that China has "no difference" with the United States on the state of trade talks, in reference to President Donald Trump’s declaration of a “substantial phase one deal” during last week’s trade talks in Washington. The two countries are expected to resume high-level negotiations next week.

The acknowledgment came four days after a Chinese trade delegation led by Vice Premier Liu He met with Trump Friday at the White House. The two sides had differed on the characterization of the outcome.

With Liu in attendance, Trump said, “we’ve come to a very substantial phase one deal.” Chinese vice premier took a more moderate stance, saying that “we are making a lot of progress toward a positive direction.”

Chinese state media also refrained from using Trump’s “phase one deal” wording over the weekend. The state-owned Xinhua news agency said Saturday that China and the U.S. “achieved substantial progress in multiple areas” in the talks.

The difference in the descriptions raised questions about whether the two sides had reached any concrete partial deal.

When asked about the differing understandings between China and the U.S. Tuesday in Beijing, Geng Shuang, a spokesman at Chinese Foreign Ministry responded: “What the U.S. side said is true, and it is the same with our understanding on this agreement.”

“This economic and trade agreement will be very important,” Geng said at a regular press conference. “It will bring benefits to China, the U.S. and the world, and it will contribute to trade and peace.”

On Monday, U.S. Secretary of the Treasury Steve Mnuchin threatened to impose a new round of tariffs on Chinese goods in December if the two sides fail to deliver on the phase one deal.

“I have every expectation if there’s not a deal, those tariffs would go in place ― but I expect we’ll have a deal,” Mnuchin told the American TV network CNBC, in reference to new tariff hikes scheduled for Dec. 15.

Mnuchin said he and U.S. Trade Representative Robert Lighthizer “will have a principal-level call next week with the vice premier [Liu He]” and that “we will be meeting the vice premier in Chile before the presidents meet to finish the deal.”

Trump and Xi are scheduled to participate in an Asia-Pacific leaders’ summit next month in Chile. In his remarks last week, Trump suggested that if China and the U.S. come to an agreement on trade, “we’ll do a formal signing with President Xi and myself."