By Fang Zuwang and Isabelle Li 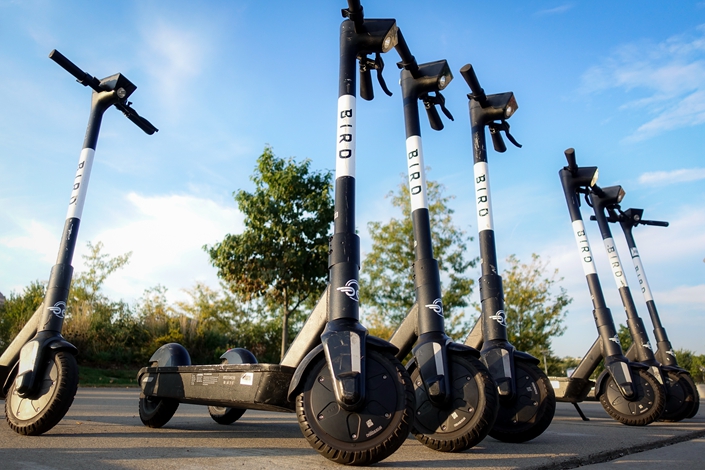 Even as hundreds of Chinese companies post earnings warnings amid an economic downturn, one firm operating in the beleaguered bike-sharing sector says it expects a massive spike in quarterly profits off the back of its export business.

HL Corp., which makes bicycles and scooters for sharing companies, said electric scooter orders from Europe and North America would help boost its profits by between 29 million yuan ($4 million) and 38 million yuan for the third quarter — a leap of 2,047% to 2,713%.

The Shenzhen-listed company, which supplies Meituan’s Mobike and Didi’s Qingju Bike in China, put the boost down to growing overseas demand from American clients such as Neutron Holdings Inc. and Bird Rides Inc.

Though 2018 was the year China’s bike-sharing bubble burst, HL’s revenues were buoyed in the first six months of this year as electric-scooter sharing became popular in places like Los Angeles, San Francisco and Washington D.C.

Foreign clients helped grow the manufacturer’s revenue 20% to 815 million yuan, and net profit 368% to more than 18 million yuan, according to HL’s 2019 interim report.

Bird, founded in 2017, rents electric scooters in more than 100 cities in North America and Europe. Neutron — which does business as Lime — operates in 120 cities across 30 countries and is pivoting from bike-sharing to also focus on scooters.

While China’s bike-sharing market has cooled, the scooter-sharing business model seems to have stabilized internationally, HL Corp. said. U.S. ride-hailing giants Uber and Lyft also endorsed the business model by setting up their own scooter-sharing units in 2018 through acquisition, according to local media reports.

In China, however, scooter-sharing businesses have failed to thrive as a result of corporate governance issues and unfavorable local laws. In one of China’s biggest cities, Guangzhou, electric bikes and scooters have been banned from the roads since 2006.

HL’s earnings projection is a turnaround for a company whose fate once seemed tied to China’s bike-sharing woes. In 2018, the year industry highflyer Ofo saw frustrated customers gather outside its Beijing offices demanding their deposits back, HL’s shared bike orders plunged more than 90% and its profit dropped 76%, according to its annual results.

HL’s share price closed up 5.7% to 5.38 yuan Wednesday in Shenzhen, and corrected to 5.32 yuan by the end of trading Thursday.