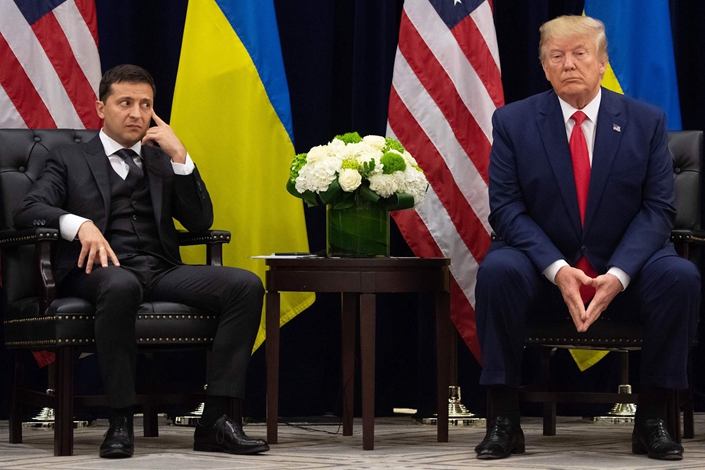 U.S. President Donald Trump and Ukrainian President Volodymyr Zelensky during a meeting in New York on Sept. 25 on the sidelines of the United Nations General Assembly. Photo: VCG

American political intrigue is dominating headlines in places as far flung as Shanghai, San Francisco and Stockholm. Reports allege U.S. president Donald Trump may have attempted to enlist Ukrainian President in an effort to undermine his chief rival in 2020’s election, Democratic former Vice President Joe Biden. This has rekindled the long-running debate over Trump’s potential ouster from office in an impeachment trial. This time, a formal inquiry is underway. Pundits see it as unique, unpredictable — and dangerous to America’s economy. If so, that would ripple globally — hitting China hard. But I see it differently. To me, this looks mostly like high U.S. political drama that is unlikely to go anywhere. At most, it sways 2020’s vote somewhat. For the economy and markets, this is more noise than actionable news. Here’s a look at the impeachment process, history and the current situation to help show you why.

Since the Republican Trump won America’s presidency in 2016, rumors of wrongdoing have had Democrats talking up impeachment. They spurred an FBI investigation, which led to the appointment of a special prosecutor — Robert Mueller. After his report and testimony yielded little earlier this year, it seemed impeachment would fall from the headlines. That changed when an unnamed U.S. official’s report leaked to the press. It claimed Trump attempted to get Ukrainian President Volodymyr Zelensky to investigate Biden’s son Hunter’s business dealings in the Eastern European nation. Trump alleges Biden used his position to Hunter’s financial gain. But to his opponents, seeking Zelensky’s help reeks of Trump soliciting foreign interference in America’s elections — problematic. Now Democrats in Congress have formally launched an impeachment inquiry, raising the possibility of Trump being removed from the White House before 2020’s vote.

American pundits claim even considering impeachment spells trouble for the economy. They say it drives up political uncertainty, hamstringing business investment. Others argue it may make Trump “even more erratic in his tweets,” inflaming trade tensions with China and others. If true, they worry it would be bad for the world and China. Now, as I wrote here on in January, tariffs enacted or threatened between China and the U.S. are far too small to upend global economic growth. But if impeachment uncertainty harmed the American economy, China would feel the pinch. America is about 25% of world GDP. Year-to-date through August, Chinese total trade (exports plus imports) with America totaled $355.7 billion. At over 10% of Chinese trade, that is the biggest share of any single country.

But those assuming impeachment rapidly raises uncertainty are being too hasty. Impeachment is far from assured. All we have now is a Democratic Party led investigation of Trump. There have been many of those since 2016. To get to impeachment, the American lower chamber of Congress — the House of Representatives (or House) — must vote to issue articles of impeachment. That requires 218 of 435 House members to assent. Democrats currently hold 235 seats. That is sufficient to pass articles, but Democrats can’t afford many defections.

That said, impeachment doesn’t mean ouster. The House passing articles of impeachment would launch a trial of the president on charges of committing “high crimes and misdemeanors” (a loosely defined term). The judge presiding over it would be the Supreme Court’s Chief Justice, John Roberts. Justice Roberts is a Republican appointee, unlikely to make extreme interpretations of evidentiary rules favoring the opposition. The jury would be Congress’s upper house, the Senate. It takes a two-thirds Senate vote (67 of 100 seats) to convict. But the Republicans control 53 seats, the Democrats 47. That means at least 20 Republicans would have to vote against a president from their own party. If they do, the vice president — Republican Mike Pence — takes over. That has never happened.

Only three U.S. presidents ever came close to removal via impeachment, which provides a very limited data set to assess economic and stock market impact. Andrew Johnson was impeached but acquitted in 1868. Richard Nixon resigned under threat of impeachment in 1974. Lastly, Bill Clinton was impeached but acquitted in 1998 to 1999. Johnson’s impeachment long predates reliable economic and market data. Chuck it. That leaves two.

Nixon’s exit may seem to support the notion impeachment brings economic troubles. The Watergate Investigation that stoked impeachment talk occurred early in the 1974 to 1975 recession. But correlation isn’t causation. Though rising political uncertainty likely added to weakness, much bigger economic factors were already at work. Nixon’s administration adopted measures interfering with prices — disruptive. There was also the Arab oil embargo, which caused energy shortfalls globally — contributing to a worldwide recession. Blaming the downturn on Watergate is wrong.

To sum up: Barring a major revelation no one can foresee now, it looks unlikely Trump is ousted from office in impeachment proceedings. Plus, history shows such moves don’t have an automatically negative impact on America’s economy or stocks. Hence, fears of uncertainty further weighing on American demand for Chinese goods seem premature at best, farfetched at worst.

Moreover, impeachment rumblings look mostly like posturing ahead of 2020’s election. Trump is essentially using Biden’s alleged affiliation with Ukraine (whether ethical or not) to imply he has character issues. Trump is likely wagering Biden is his biggest threat. He is the most moderate Democratic candidate, and many pundits think has the best chance to unseat Trump next November. Trump might agree. He probably thinks Senator Elizabeth Warren, Biden’s closest rival, can’t win the states in America’s industrial heartland that swung 2016’s election his way. Voters in those states are more moderate, and many Americans see her campaign pledges as extreme.

Is he right to think Warren is an easier candidate to beat? No clue. But it seems to be his gambit. Impeachment will be a tricky move for Democrats politically if they go that direction. It could undercut Biden. It could also end the repeat calls for impeachment and huge array of investigations of President Trump. And it could impact the popularity of Senate and House candidates in must-win states for both parties, potentially providing a path for the Republicans to win Congress and the presidency next year.

For those reasons, the impeachment saga stealing so many headlines isn’t a threat. It is a deep dive into American political theatrics unconnected to China. Chinese investors shouldn’t let it affect their outlook.

If you want to submit an opinion piece to Caixin Global, please send an email to editor Lu Zhenhua (zhenhualu@caixin.com).