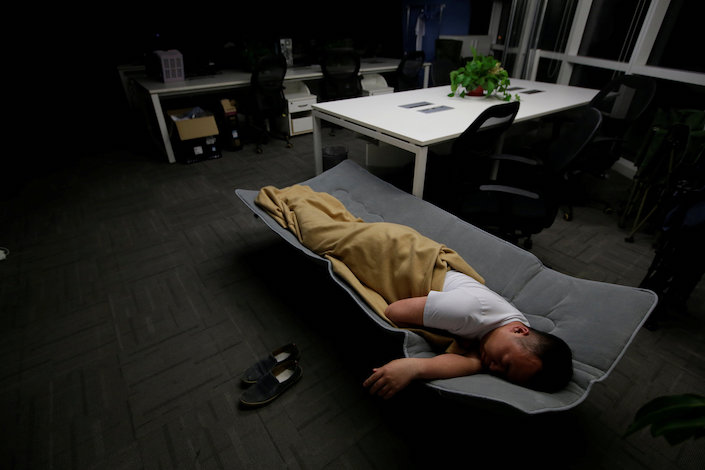 An Internet engineer sleeps on a camp bed at his office after finishing work early morning. Photo: VCG

The “996” culture may apply across all Chinese industries, not just in the internet sector.

Chinese workers in all industries worked an average of 6.45 hours of overtime a week in the third quarter, actually surpassing time logged in the internet sector, according to an IT salary-focused study released by job-hunting platform Zhaopin on Sunday.

The internet industry has been most closely associated with the controversial “996” culture of working 9 a.m. to 9 p.m. six days a week. The new study suggests such workplace practices are widespread in Chinese industry.

Services in finance, medicine, beauty, hospitality, food, travel, media, sport and leisure, trade, the public sector, farming and forestry ranked below the internet sector in overtime, but all worked their employees more than five extra hours a week, according to the report.

Under Chinese law, employers are not supposed to require more than one hour of overtime per day, except for “special reasons,” which can extend overtime to up to three hours a day and up to 36 hours a month.

With an average monthly salary of 9,296 yuan ($1,314.28), China’s internet sector paid higher than the country’s average of 8,698 yuan in the quarter. However, the sector’s wage growth slowed in the quarter, reflecting “business conditions in 2018,” the report said.

Breaking down the sector, salaries in online gaming, e-commerce, software, IT services, semiconductors, and value-added telecom services all ranked higher than the average across all industries. Gaming placed highest at 10,054 yuan a month, followed by e-commerce, while hardware and telecom equipment both fell short of the cross-industries average.

Although software ranked third-highest in the sector, the industry’s salaries grew the fastest at 31.53% compared with the same period in 2017, according to the report. On the flip side, telecom services and telecom equipment makers had the lowest salary growth in two years at 10.95% and 12.7% respectively, both below the overall mean of 14.47%.

The low growth figures belie China’s more recent 5G boom, which has resulted in the average 5G-related monthly salary surging 44% from 10,839 yuan in the January-to-May period in 2018 to 15,644 in the same period this year, according to the report. Hiring during this period in 2019 vaulted 806.6% year-on-year.

For the most part, Beijing, Shanghai, Shenzhen and Hangzhou made up the cities with the highest salaries for the internet sector, while several cities ― Xiamen, Zhuhai, Guangzhou, Nanjing, Suzhou, Wuhan and Chengdu ― ranked next, depending on the job.