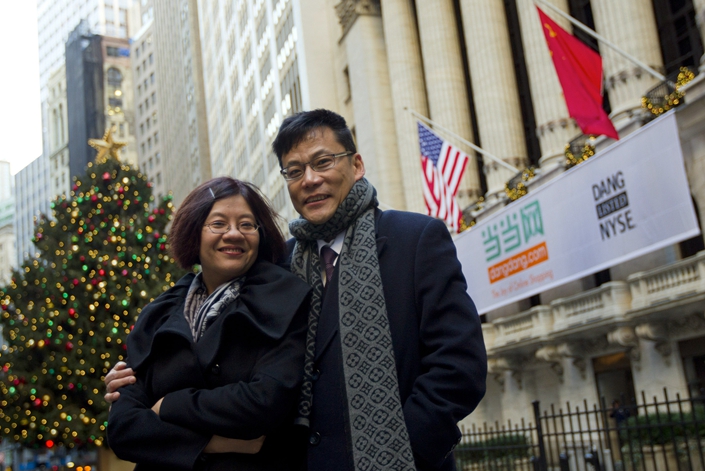 One of China’s most famous business couples who co-founded a company once considered the Amazon of China may be calling it quits after 23 years of marriage.

Li Guoqing announced the split from wife Peggy Yu on his Weibo microblog on Wednesday. He revealed he submitted a divorce petition to a court in July. But he said that earlier this month Yu declined the request by saying the relationship wasn’t broken.

In a more recent post on Thursday, Li said that Yu told him that she would agree to the divorce only if she is allowed to keep 75% of their shares as part of their divorce settlement. Li’s post didn’t specify shares in what, but it may refer to splitting up the Dangdang e-commerce company the two co-founded.

“I disagree with the requirement and require an equitable division,” he wrote. “After the split, who manages the company shall respect the decision of all shareholders.”

Signs of stress in the marriage had already emerged at the start of the year.

“Looking back, it’s not a good business model to run a startup with your spouse,” Yu told Caixin in an interview in March. A month earlier, Li announced he was no longer involved in Dangdang’s operations and also no longer held any positions on the company’s board.

Li and Yu were two of the earliest major power players on China’s e-commerce scene when they opened Dangdang in 1999, and it quickly became a success. The company did well for its first decade, and went public on the New York Stock Exchange in 2010. But it was gradually overtaken by e-commerce giants Alibaba and JD.com, and six years later it delisted from New York.

In September last year, the company agreed to be acquired by HNA Technology, affiliated with the now-struggling debt-heavy HNA Group, in a 7.5 billion yuan ($1.2 billion) deal. But that deal collapsed due to HNA’s cash crunch.