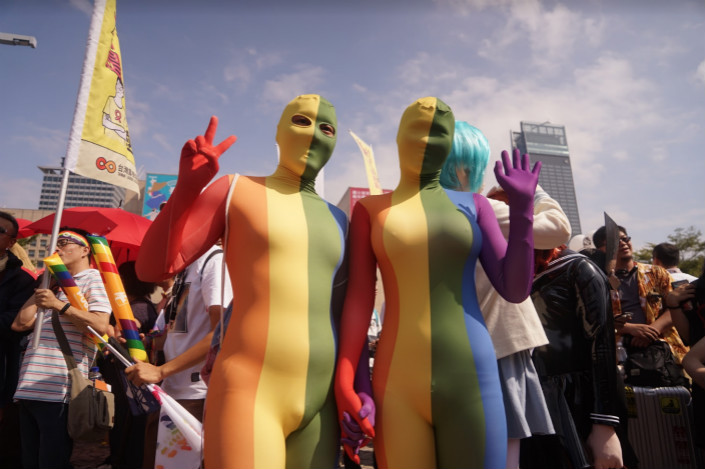 Hundreds of thousands of LGBTQ community members and their supporters gathered on the streets in Taipei on Saturday to celebrate the legalization of same-sex marriage and call for inclusion and equal rights.

An estimated 200,000 people — some travelling to Taipei from far away just for the event — participated in Taiwan Pride, the largest annual LGBTQ gathering in Asia and the first in Taiwan since it legalized same-sex marriage in May.

Among the crowd were Chinese mainlanders who hoped to see their society adopt a more inclusive attitude.

Xiaoli, a 56-year-old mother of a lesbian daughter, said that she travelled to Taiwan from the western municipality of Chongqing this week with other parents of LGBTQ children to participate in the pride celebration.

“I’m always excited to take part in a pride parade because we’re showing the world the existence of the LGBTQ community, and hopefully society can be more inclusive and respectful of the community,” said Xiaoli, who struggled at first with her daughter’s sexuality after she came out about seven years ago. Now Xiaoli’s a regular volunteer at PFLAG China, a nonprofit organization dedicated to helping parents and families of LGBTQ community members across the country.


Shishi, a transgender woman living in Beijing, came all the way to Taipei on her own to participate in the Taiwan Trans March on Friday, the first-ever transgender parade in Taiwan. She also joined the pride parade the next day.

“It is a bit disappointing that I don’t see that many transgender-dedicated organizations or flags today at the pride parade,” said Shishi, which she attributed to transgender rights not being a part of many public discussions. However, she said that the transgender march was very encouraging and empowering for her, as it was the first time she saw so many transgender people gather with the same goal of seeking recognition of their rights.

In a first for Asia, Taiwan in May officially enacted a special law for same-sex marriage. Taiwan’s top judicial body ruled in 2017 that it was “unconstitutional” to restrict same-sex couples from getting married, and gave the legislature two years to amend the law accordingly.

Meanwhile, the question has been raised in the LGBTQ community whether a same-sex couple in which one partner is from Taiwan and other from the mainland could get married in Taiwan. Household registration agencies told Caixin that it’s currently not possible, as both parties need to be from jurisdictions that allow same-sex marriage. Taiwan does have a “same-sex couple noting certificate” system in place that allows each member of a couple who prove their relationship to sign a surgery permission agreement on behalf of their partner, but does not have any legal force.

As of the end of September, Taiwan had registered marriages for 2,155 same-sex couples, according to Taiwan authorities.