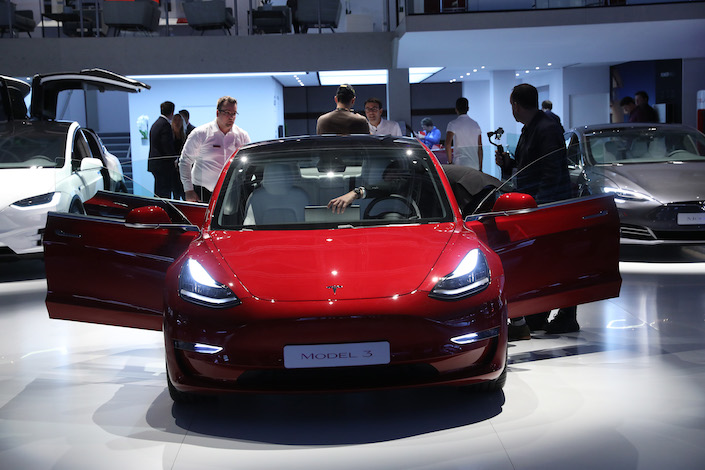 Tesla is nearing the launch of China-made models. Photo: Bloomberg

(Bloomberg) — China’s Tesla Inc. fans expecting to get the new, locally built Model 3s on the cheap were just dealt a surprise.

Tesla said Friday its China-made vehicles will start at $50,000 in the country, only about 3% less than what the most basic imported models have been going for, after the U.S. company decided to include the Autopilot driver-assistance software in each vehicle. Variants without Autopilot will be phased out in China.

The first Tesla vehicles to be produced outside the U.S. are part of Chief Executive Officer Elon Musk’s efforts to expand in Asia and take on local electric-vehicle upstarts. The pricing suggests Musk is trying to maintain Tesla’s premium image in the world’s largest auto market, leaving local competitors to compete for buyers of cheaper EVs.

“It might affect the choices of some potential customers, but not much,” said Yale Zhang, the founder and CEO of consultancy AutoForesight. “The product’s target group is not that price-sensitive compared with those choosing much cheaper ones.”

Tesla is nearing the launch of China-made models just 10 months after breaking ground on its factory near Shanghai. This is also the first time a wholly foreign-controlled automaker has produced a car in China.

Deliveries of the locally made variants with Autopilot will begin in the first quarter of 2020, the company said in a statement in China. The cheapest imported Model 3s, without Autopilot, have been selling for about $51,500 in China, while in the U.S. the model’s starting price is about $39,000.

Local rival NIO Inc., meanwhile, charges $47,800 in China for a basic version of its ES6 sport utility vehicle after state subsidy. Electric cars from other local contenders such as BYD Co. typically go for much less.

Tesla could also sell some early versions of China-made Model 3s that don’t have Autopilot, though it hasn’t disclosed the exact timing or pricing for those. The company said it plans to phase out models without Autopilot in China and no longer takes orders for such variants.

The company will also stop selling the most basic imported Model 3 version in China, meaning local customers who want a U.S.-made Tesla will from now on need to shell out at least $62,000, which buys an all-wheel-drive variant without Autopilot.