In Depth: Overloaded and Overturned — Inside the Deadly Wuxi Bridge Collapse 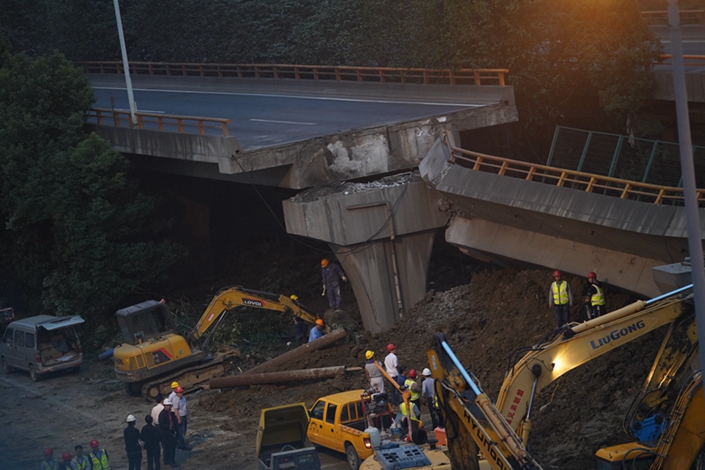 The scene of the Wuxi bridge disaster in Jiangsu province, on Oct. 11, 2019. Photo: Ding Gang/Caixin

At 6:10 p.m. on Oct. 10, a highway road bridge overturned in Wuxi, Jiangsu province, crushing three cars underneath, killing three and injuring two. A preliminary analysis found the cause was overloaded trucks.

Truck overloading isn’t as bad as it once was in China, but the problem is still endemic, especially on short trips within cities. What’s worse, is that the design of many of China’s road bridges mean they can be unstable if confronted with uneven, heavy loads.

The vehicles involved in the Wuxi incident, visible in photos after the incident and spotted by witnesses who spoke with Caixin, were carrying large steel coils. One truck was carrying six hot-rolled steel coils that, according to the certificate affixed to one of the coils, weighed more than 6,000 pounds. If all of the coils were the same weight, the load would have been 171 tons – officially overweight.

The truck with six steel coils was travelling right behind another that was carrying seven of the same kind of steel coils, a load of nearly 200 tons. Together, they would have been far above the maximum weight allowed on the bridge. The two trucks appear to have come from the same logistics company.

The design standard for this particular section of the 312 National Highway, which was built in 2003 and opened in 2005, is Class I. According to China’s design code for urban bridges, the maximum load for Class I highways is 55 tons. The load of each of the two vehicles exceeded the design standard of the bridge by over 200%.

A number of locals told Caixin that the 312 National Highway is the only road connecting a number of steel processing plants, factories, distribution centers, and logistics companies. Vehicles that appeared to be carrying heavy loads were frequently seen on the road.

Caixin found that heavy-duty semi-trailer trucks parked on the roads around Wuxi Success Transport Co. Ltd., the transport company to which the two trucks were registered, had maximum capacities of 38.5 tons to 40 tons according to the numbers printed on the vehicles. Truck drivers told Caixin that these trucks normally end up carrying at least four steel coils, a load in excess of 100 tons.

One person in the logistics industry who asked to remain anonymous told Caixin that if companies don’t overload the trucks, they “can’t make any money.” He estimated that there are 100 trucks making the trip from surrounding industrial facilities into Wuxi city proper every day — most of which are overloaded.

The bridge that collapsed in Wuxi was a box girder design with three spans. This means that there were four piers holding up three bridge segments. Two of the piers were single-column piers. Box girder bridges have a simple shape and are cheap to build, making them a widely-used design for urban bridges and high-speed ramps in China.

However, single-column piers have obvious weaknesses. While they can meet the current safety requirements, the stability of the structure can be insufficient if weight is not distributed evenly — especially if vehicles on one side of the road are overloaded. Many of the past bridge collapses in China have been bridges with this kind of structure.

Bridge engineers told Caixin that judging from the available public photos and information on the Wuxi incident, the seriously overloaded trucks and the unbalanced load caused lateral instability in the bridge’s structure, leading to it twisting and collapsing. Some experts pointed out that the overloaded vehicles were definitely illegal, but the fact that the bridge suddenly overturned indicates that the bridge’s design was also flawed.

Zhu Shangqing, a senior engineer with Beijing Municipal Bridge Maintenance Management Group Co. Ltd., said that the ubiquity of this design means that China just has to deal with it. However, “there are engineering predictions and countermeasures for possible overload problems on single pier bridges,” he said. “By installing anti-twist and anti-overturning measures then it can be prevented even in the case of overloading. What’s important is to mend the situation.”

China’s Ministry of Transport last year issued an updated code for the design of highway bridges and concrete bridges. Compared with the 2004 version, the major revision was a requirement that anti-overturning calculations must be conducted on concrete box girder bridges.

Zhu believes it is possible that the design of the Wuxi highway bridge was not up to the new 2018 standards and that its safety should have been reevaluated.

A long way to “control excess”

Despite multiple bridge collapses, China has yet to solve the problem of overloading. In 2004 and 2011, the Ministry of Transport joined forces with other ministries and commissions to control overloading. In 2016, the ministry issued regulations which stipulated new standards for truck sizes and weights. They also stated that the maximum weight of trucks after loading should not exceed 49 tons.

A number of transport industry insiders told Caixin that the overloading situation is much better than it used to be. For example, major roads have introduced high-tech ways of monitoring overloaded trucks and inflicting appropriate punishments, said Liu Yanzhong, the senior director of product technology and planning at FAW Jiefang Automotive Co. Ltd., a state-owned truck manufacturer. A truck driver who frequently transports coal between the Inner Mongolia autonomous region and neighboring Hebei province also confirmed this.

While overloading on highways has been curbed, the problem of overloading over shorter distances is still serious. After the bridge collapsed in Wuxi, the Jiangsu provincial transport bureau held an emergency meeting on how to fight the problem. They found that a large number of overloaded transport vehicles had been intentionally using rural backroads to avoid weighing stations at highway entrances.

The issue is compounded by a shortage of personnel for enforcement, monitoring, and inspections. Many counties and cities only have monitoring sites at certain important points along highways, Liu said, and due to the high volume of traffic staff cannot inspect every single vehicle. According to Liu, about 8% of domestic short-distance cargo journeys are conducted by overloaded vehicles.

Transport insiders agreed that the overloading problem will be difficult to completely eradicate due to the lack of a long-term mechanism and means to supervision.

Zhai Xuehun, founder and CEO of internet-of-things company G7 Networks, suggested that short-distance overloading must be tackled with technology and data that can monitor vehicles, ports, and terminals. This approach can reduce the reliance on manpower.

Other industry insiders suggested that the primary issue is that China relies too heavily on road freight. According to the National Bureau of Statistics, highway freight accounted for 77% of freight in 2018. Rail accounted for a mere 6%.

However, highway freight is more flexible and lower in cost. Many energy and resource enterprises are not connected to rail lines, so they can only rely on road freight.

In December 2017, the Central Economic Work Conference – where China’s top leaders set economic policy — proposed increasing the proportion of freight transported via rail in a bid to reduce pollution. Since then, the Ministry of Ecology and Environment and the Ministry of Transport have repeatedly requested for bulk cargo such as coal and ore to shift to rail transportation.

Unfortunately, this shift has encountered major obstacles in the form of insufficient rail infrastructure and high costs. It would require the building of special rail lines, which would require a huge amount of investment, and in the long run may not even be cheaper than road transport.

Amid efforts to prevent trucks hauling overloaded cargo, some have called for increasing punishments to deter drivers. However, this is an issue that not all agree on.

According to Article 92 of the current road and traffic safety laws, motor vehicles with cargo exceeding the approved capacity shall be fined between 200 yuan ($) and 500 yuan. If it is carrying more than 30% of the approved carrying capacity, the fine increases to 500 yuan to 2,000 yuan and the vehicle is to be impounded. If the vehicle violates the rules multiple times, the person in charge is considered directly responsible and fined 2,000 yuan to 5,000 yuan. Compared with the costs saved by overloading vehicles, though, this kind of punishment has limited effect.

In addition, many trucks are illegally produced or refitted, despite strict regulations for truck loads and frames. A 2016 report from China’s legislature found that between 2006 and 2015, about 60% of major accidents were caused by overloading.’

Peng Xinlin, an associate professor at the Beijing Normal University’s School of Law, said that the fines are needed to give the law teeth.

Liu Xiang, professor of criminal law at the China University of Political Science and Law, believes that the punishment should not fall on the drivers themselves. “There are bosses and managers behind the system that overloaded the trucks. Drivers are the most vulnerable group,” he told Caixin.

Peng also said that the threshold and conditions for considering overloading as a crime must be thought through. “Overloading by one ton and by 100 tons are not the same thing,” he said. “The degree should also be considered.”