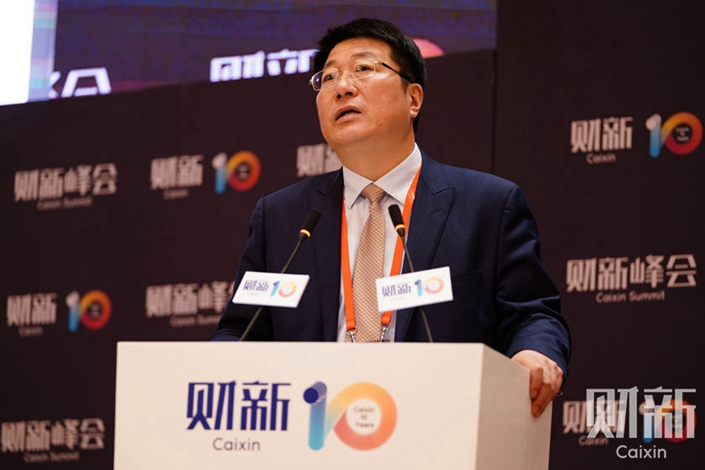 The head of one of China’s largest state-backed chipmakers has criticized recent U.S. moves to limit tech imports from China, calling them a political attempt to reverse the trend of globalization.

“When it comes to the semi-conductor industry’s global supply chain, no one can reverse the tide,” said Zhao Weiguo, chairman and CEO of Tsinghua Unigroup, at the annual three-day Caixin Summit in Beijing, which kicked off Friday.

“Resorting to political means to reverse the trend of globalization might have a short-term effect but it won’t be effective in the long run,” he said, because it won’t stop companies seeking profit where the business opportunities are.

Tsinghua Unigroup, which designs and produces semiconductors, is among the national champions that make up China’s plan to develop its own chip industry. The need for self-reliance in the field was thrown into stark relief last year when Chinese telecom company ZTE Corp. was belted by a decision to ban it from doing business with U.S. suppliers. The company was accused of violating U.S. sanctions on Iran.

Then in May, the Trump administration blacklisted ZTE’s rival Huawei for the same reason, preventing it from buying goods, such as semiconductors, from American suppliers without U.S. government approval.

The semiconductor sector is one of the world’s most integrated industries, and the manufacture of one chip typically involves multiple nations.

Zhao suggested U.S. companies could put more pressure on their government to change its policy. “U.S. companies can do better. However, some of them have (done the opposite) by saying bad things about China to the U.S. government in the U.S., while making money here,” he said.

He said China’s microprocessor industry had made progress after massive injections of state funding, but it still lagged far behind developed countries. “Actually, the U.S. shouldn’t be so nervous. We are a long way behind, and there is not any competition or threat from China,” he said.