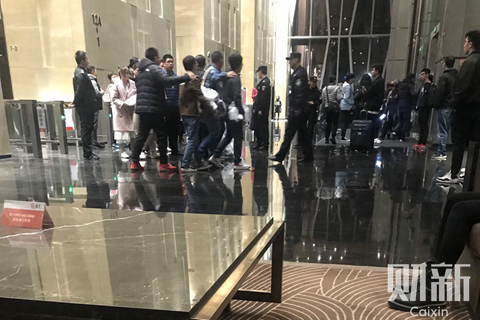 Police raided a Chinese online car financing platform that just filed for an initial public offering (IPO) in the U.S.

The raid took place at the office of Huachang Finance Lease (China) Co. Ltd., the operator of used car installment loan platform mlcjr.com, at Beijing Greenland Center Monday evening, according to a Caixin reporter at the site who witnessed the incident.

Caixin learned that the raid was related to illegal debt collection activities at Huachang affiliates. There were complaints regarding mlcjr.com on a third-party complaint platform, including fraud and using violence to collect debt.

At least 30 police officers were at the office building, where Huachang’s office is located on the 20th floor. About a dozen employees carrying boxes were taken away by the police, the reporter witnessed.

Securities staff at the office building told Caixin that the police had checked the building a few days earlier and asked the property managers to provide floor plans and information on the location of all entrances and elevators.

The company’s senior executives were not in the office at the time. Fang Fang at Huachang’s public relations department told Caixin that the company can’t disclose any information under the quiet period rules in advance of the planned U.S. IPO.

After the police left around 7:20 p.m., employees at the company seemed to continue their normal work, the reporter witnessed. Employees were told by the police to work as normal, a securities manager at the office building told Caixin.

Mlcjr.com filed its IPO application with the U.S. Securities and Exchange Commission Oct. 31 with plans to list on the New York Stock Exchange.

Founded in 2014, the company’s net profit in the first half of 2019 nearly tripled to 232 million yuan ($33 million) on revenue of 982 million yuan, according to its prospectus. The company’s major shareholders include Chinese agribusiness conglomerate New Hope Group and e-commerce giant JD.com.