By Flynn Murphy and Zhao Jinzhao 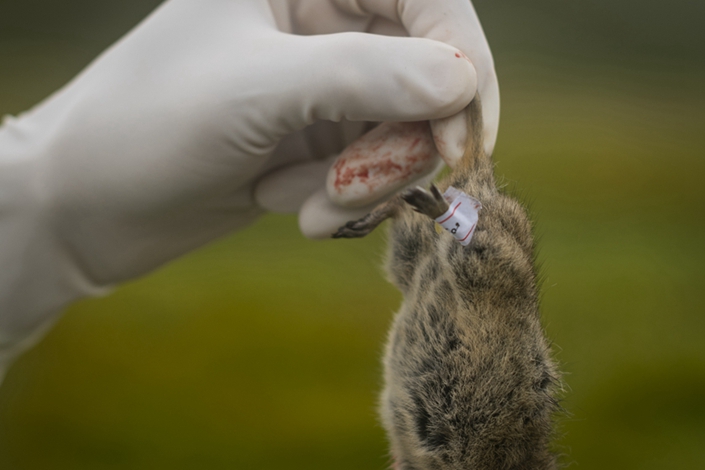 A rat gets tagged by a member of a plague control squad on Aug. 27 in the Garzê Tibetan autonomous prefecture in Southwest China's Sichuan province. The rat's blood and fleas will be tested for plague. Photo: VCG

Two people diagnosed with pneumonic plague at a hospital in central Beijing have been identified as a married couple who were medically transferred from remote Inner Mongolia, reducing the likelihood there are further cases in the capital.

The 43-year-old man and his 46-year-old wife are now undergoing treatment in an isolation ward at a specialist infectious diseases hospital in Beijing, health authorities said. On Thursday morning, authorities said one patient was in critical condition but was not deteriorating, while the other was stable.

Fear gripped the capital this week amid rumors of an outbreak of the deadly disease which conjured images of the medieval Black Plague and earned comparisons to the southern Chinese SARS crisis of 2003. Now the authorities have quietly sought to reassure the public that the two patients were in fact transferred by ambulance from an ill-equipped treatment center in the Inner Mongolia autonomous region, and that the risk they had infected others in Beijing was minimal.

A source at the Chinese Center for Disease Control and Prevention (CDC) told Caixin the couple was transferred for specialist treatment after they were initially misdiagnosed in their home region. “We have these cases in Inner Mongolia,” said the source, who has knowledge of the case and asked not to be identified, citing its sensitivity.

They called the transfer “routine.”

An internal CDC briefing document obtained by Caixin says the couple, from Sonid Left Banner in remote central Inner Mongolia, began to show symptoms of the condition late last month and were ultimately sent to Beijing’s Chaoyang Hospital emergency room on Nov. 3. They were transferred shortly after to intensive care at the same hospital, and later to Ditan Hospital, which specializes in infectious disease treatment.

The pair are thought to have contracted the disease from infected rodents while doing pest control work. The Yersinia pestis bacteria which causes all three types of plague — bubonic, septicemic and pneumonic — is endemic to the region.

Caixin understands that the couple’s son and daughter are under observation in the same hospital but have not shown symptoms of the disease. The CDC document said those who came into contact with the patients in the emergency room of Chaoyang Hospital had been contacted, and some had been preventively treated with antibiotics.

In a short statement late Tuesday night, the Chaoyang district government confirmed two people were being treated for the infectious disease and said “relevant prevention and control measures have been implemented.” Social media posts showed many were unconvinced. Rumors of other cases in Beijing emerged through Thursday, but Caixin reporters could find no evidence they were true.

Associate professor Sanjaya Senanayake, a plague specialist from ANU Medical School in Canberra, Australia, said pneumonic plague — so called because the plague bacteria has entered the lungs — made up a small fraction of cases. Unlike bubonic plague, which causes obvious painful swollen lymph nodes, pneumonic plague can be misdiagnosed as a different kind of lung infection if doctors aren’t on the lookout for it.

“Pneumonic plague is scary because if not treated quickly pretty much everyone will die from it,” the professor said. But he said once diagnosed it was relatively simple to treat with many common antibiotics, and proper medical care brought the mortality rate down considerably.

He added it was still unclear whether humans could contract pneumonic plague from other humans, and that there might be more cases each year than were recorded because “some of the antibiotics that might be used for someone with pneumonia or a chest infection will also cover plague.”

China has officially recorded more than 1,000 cases of plague in the past 50 years, including 183 deaths. The Yersinia pestis bacteria that causes it is most common China’s northwest and southwest, with about half of all diagnosed cases being in Southwest China’s Yunnan province and the largest number of recorded deaths being in Northwest China’s Qinghai province.