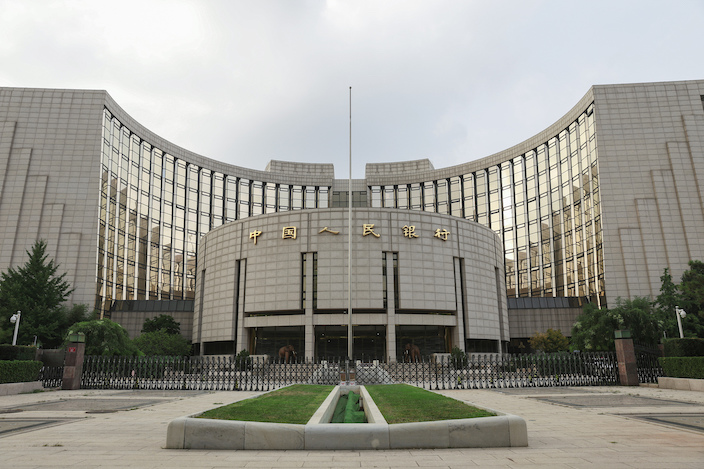 China’s central bank slashed the interest rate Monday on its regular reverse repurchase open-market operations, the first such cut in more than four years. Earlier this month the bank lowered the rate on its medium-term lending facility (MLF), signaling that more rate cuts could come.

The main reason for the move was disappointing economic data for October, economists at Macquarie Capital Ltd. said. The central bank’s move indicates China “is clearly entering a new rate-cutting cycle and more cuts lie ahead,” the economists said.

The PBOC will conduct its monthly assessment of the loan prime rate (LPR) Nov 20. Macquarie said it expects the bank may cut the one-year LPR again after a September reduction.

China’s value-added industrial output in October was up 4.7% from a year earlier, down from September’s 5.8% pace, data from the National Bureau of Statistics showed. Retail sales rose 7.2%, the smallest gain in six months, and fixed-asset investment in urban areas increased 5.2% in the first 10 months of 2019 from a year earlier, a record low for the period, official data showed.

Meanwhile, driven by surging pork prices because of the African swine fever epidemic, consumer inflation in October rose to its fastest pace in almost eight years.

The central bank faces a dilemma with slowing growth amid rising inflation, economists Larry Hu and Irene Wu at Macquarie said. By cutting the MLF and reverse repo rates, the PBOC wants to ease concerns about monetary tightening to fight inflation, they said. If pork prices continue to rally, the PBOC could turn hawkish again, Hu and Wu said in a note.

In its third-quarter monetary policy report released Saturday, the central bank said it will “increase counter-cyclical adjustment” to ward off downward pressure on the economy, while staying vigilant on expectations that inflation may spread. The PBOC said it remains committed to a targeted, constrained approach toward easing, repeating an earlier pledge to continue to cut the amount of money banks need to put aside as reserves to ease credit.

On Nov. 5, the central bank reduced the interest rate on its one-year MLF, a key reference used by banks to price loans, by 5 basis points, or 0.05 of a percentage point, to 3.25%, the first cut since the interbank market instrument was introduced in 2016.

The market didn’t respond to the earlier lowering of the MLF rate, assuming it was unlikely for the PBOC to further reduce rates in the context of deleveraging and rising inflation, said Ming Ming, vice director of the research institute at Citic Securities Co. He said he expects another MLF rate cut at the end of this year or early next year.

Since late October, the central bank had suspended open-market operations for several straight days, resulting in a net withdrawal of liquidity from the market. As the tax payment season approaches, the market expected a tightening of monetary policy. The cuts to the MLF and reverse repo rates put an end to that expectation, a trader at a brokerage said.