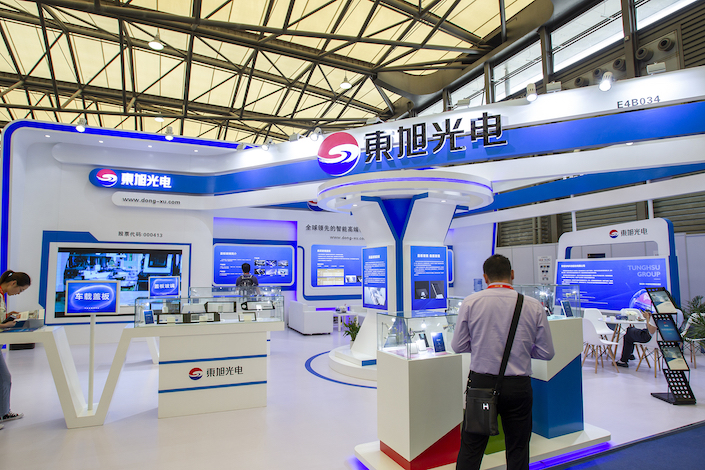 Caption: A Tunghsu booth at the 2019 Universal Display Expo in Shanghai. Photo: VCG

(Bloomberg) — A Chinese maker of electronic display panels missed payment on two of its yuan bonds, a sign that the nation’s private businesses continue to face a funding crunch amid an economic slowdown.

Tunghsu Optoelectronic Technology Co., a Shenzhen-listed unit of Tunghsu Group Co., said in a stock exchange announcement Monday that it failed to repay 1.97 billion yuan ($280 million) principal and interest on a note because of tight liquidity after bondholders exercised a put option. It also missed interest payment on another bond.

The missed payments underscore rising credit risks among Chinese private sector companies, which form the majority of the country’s bond defaulters. Onshore defaults in China excluding Tunghsu were at 110 billion yuan, close to last year’s full-year record of 122 billion yuan, according to data compiled by Bloomberg.

Bondholders haven’t reached an agreement on the deadline extensions yet, according to the company official and bond underwriter.

Tunghsu Group’s parent Dongxu Optoelectronic Investment Co. is planning to sell its 51.46% stake in the company to the State-owned Assets Supervision and Administration of Shijiazhuang Municipal Government, according to a statement (link in Chinese) on the Shenzhen stock exchange. Trading in the shares of Tunghsu Group’s two listed units were halted Tuesday.

Tunghsu Group’s dollar bond due 2020 was indicated at around 50 cents on the dollar Monday. Its offering memorandum states that a cross-default will be triggered on the note if the company’s parent guarantor or any restricted subsidiary fails to repay principal amount of $10 million or more when due.

Tunghsu Group had 50.9 billion yuan of cash and cash equivalents as of the end of June and a total liability of 129.1 billion yuan, according to its interim financial results.