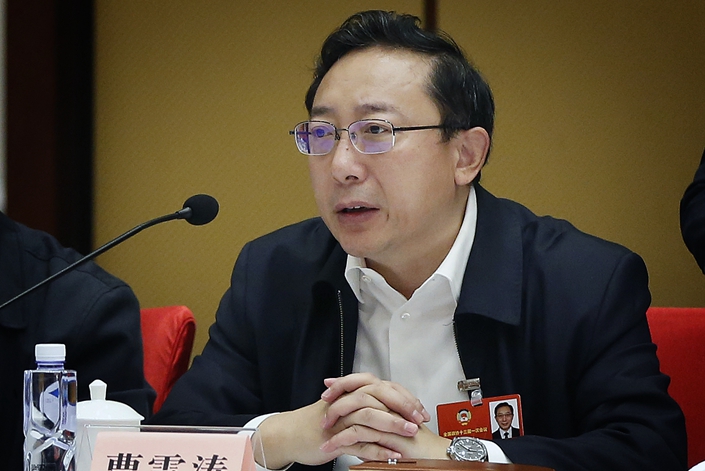 On Nov. 13, Elizabeth Bik, a microbiologist and former associate researcher at Stanford University, raised questions about data presented in a number of academic papers. All of them were either authored by or came from labs run by Cao Xuetao, an immunologist and the president of Tianjin’s prestigious Nankai University. Over the last week, the number of papers flagged by Bik and others has hit 60.

Bik suspects that some of the images in the reports could be doctored, which would indicate that data had been falsified. She told Caixin that five years ago, she raised concerns about three other papers published by Cao’s lab, and subsequently decided to take a closer look at all of the papers from the lab.

Cao has long been engaged in immunology research and has held a number of prestigious posts. He is the former editor-in-chief of the Chinese Journal of Tumor Biotherapy, a former editor-in-chief of the English-language journals Cellular and Molecular Immunology and the Journal of Molecular Medicine, among others. He is a well-regarded figure in China’s scientific community.

On Monday, the Chinese Academy of Engineering said that it would investigate the concerns raised by Bik and others.

Caixin spoke with Bik on Tuesday, who emphasized that she is not accusing anyone of misconduct. Below is an edited excerpt of the interview.

Caixin: You worked at Stanford for 15 years and now you focus on research integrity full-time. What drives you to work on this issue?

Elisabeth Bik: Well, I’m not being paid, I just basically quit my job. After Stanford, I still worked for two and a half years in industry. I think while I was searching for a new job, I also realized I really, really liked doing what I had been doing as a hobby. I wanted to do that full time. But I wasn’t sure about my financial situation.

So I checked with my husband, who is retired, and we thought, okay, we can afford for both of us to not have a job. So in March this year I quit my new job. I just thought I’ve got to do this full-time because I feel I’m needed, I can do something. I’m in a situation where I can make a difference to science and I’m just going to look at a lot of papers.

I’m not singling out any particular country. This was just a set that I came across, and it was from the same lab where I had already found three papers from, and then I kept finding more and more. I’m not targeting China, I just did a big group in India, and I found people from Harvard — I have found many, many people from many different countries.

How do you spot problems in the images in academic papers?

I don’t use any special software, I just go through all of the papers. If I think I see copied images, I just mark them. I can’t see if an image has been altered, for that you’d need to download the file onto a device for comparison with the original, and I can only rely on images from the published paper. But I think other people will read these papers. My work isn’t perfect, and someone else might do it more carefully and find more problems with the pictures, data and charts. But for now, I’ve found a lot — I think around 50 (from the lab in question).

As of the morning of Nov. 19, you’ve looked through 300 papers published by Cao’s lab — how many of them have problematic images?

Yes, I think we have around 50 flagged on (academic peer review website) PubPeer (on Nov. 19). I’m not the only person doing this — there are some other people who have been sending me things, but they’re anonymous. So I think a lot of people are afraid to speak out, but there are other people searching his work.

Of the papers you have raised concerns about, seven were published in Cellular and Molecular Immunology during the time when Cao was an editor-in-chief of that journal. Would that kind of position make it easier for him to publish papers in that journal?

Yes, that’s usually the case, but it shouldn’t be a way to get your paper published if it has misconduct. I think there’s so many conflicts of interest with editors, and it often happens that people who are editors-in-chief get their own lab’s papers published more easily than for other people. It’s all about who’s friends with who, that’s the same everywhere in the world.

If these images are actually the consequence of misconduct, does that mean there are some loopholes in the peer review mechanism?

Well, just to emphasize again, I have no way of saying that it is “scientific misconduct.” Some of these could be honest errors, or maybe sloppy bookkeeping. But I do think that peer review has not really looked out for these types of duplications. I think most peer reviewers don’t know that it exists, and if you don’t know it exists, you can’t look for it. I think some peer reviewers would say that it’s not their job to look for misconduct or mistakes. But if you have any suspicion about the quality of the paper, you should raise that with the editor, with the authors, ask to see the raw data. It doesn’t even add that much extra time to go over the figures and catch these things.

One of the papers published in Clinical Cancer Research in 2005 was corrected in 2014 because it was pointed out that there were manipulated images. During the revisions, Cao said that the changes wouldn’t impact the results. Is that persuasive?

I’m just going to say not really — I can’t remember if this is the same paper that I wrote a blog post on. But there was a paper of Cao’s that I wrote about around five years ago. In that paper there were four or five figures that contained what appeared to be manipulated photos, and there was just a simple correction. And I don’t think that’s the right decision. Cao and his team agreed that the photos were wrong, and replaced them with new photos, but if you look at what is wrong with these photos, it’s that they’re duplicated. Like, I don’t think that should have been a correction.

Again, not saying that it’s misconduct, it’s not always misconduct. But it’s also editors who need to be a little bit more courageous, a little bit more strong, have a little bit more spine and just say you can’t correct this, these are too many errors, and of course every figure in a paper supports the conclusions of the paper. If it’s one little error — like I’m 100% sure that my papers contain errors, honest errors happen all the time — that’s okay. But if it’s a complete figure that is falsified, you can’t trust the rest of the figures either. I think having fabricated data in at least one figure cancels out the rest of the paper.

And he said it wouldn’t affect the conclusion of the paper.

Yeah, and that’s what happens all the time unfortunately. And people like me and others who do similar things are very frustrated with this. The editor should have just said well you know what? This does affect everything and we’re going to retract it. I think both parties are at fault.

I try not to make it about the person. It’s very hard for me to not talk about the person whose name is on all these papers, but I want to make it about the science, and I think that’s my goal. I’m not here to get people arrested or get people in trouble. I’ve noted that my work may break careers and might do a lot of harm, but in the end I hope it does good and hopefully makes people realize that we should not be cheating no matter how much pressure is on us.

We need to be honest and we need to care about science and about the next generation.