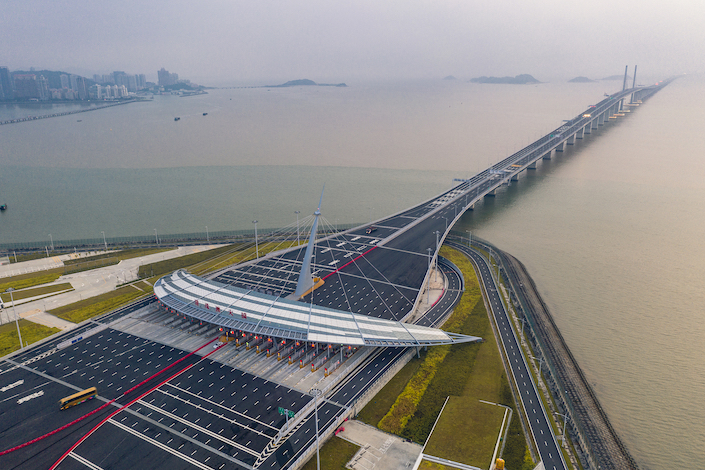 The West Kowloon Magistrates' Courts found Wednesday that 12 laboratory employees of Jacobs China Ltd. conspired to defraud in testing the strength of concrete bricks used in the gigantic project between 2013 and 2016.

The 12 were among 21 Jacobs China workers who were arrested in May 2017 by Hong Kong’s Independent Commission of Corruption on suspicion of faking the concrete test reports. Two were later released without being charged. One was sentenced in December to eight months in jail for a less severe charge of using a false instrument. Six others facing fraud charges pleaded guilty before trial in January.

Jacobs China was set up in 2012 to handle the tests on construction materials for the Hong Kong-Zhuhai-Macao Bridge after construction started in 2009. The Civil Engineering and Development Department later retested materials involved in the Jacobs China case and found in June 2017 that about 0.11% of the 303,700 samples tested showed irregularities, meeting the overall quality requirements.

The Hong Kong-Zhuhai-Macao Bridge is a signature project in an ambitious Beijing initiative to integrate the Pearl River Delta region. The bridge puts the three cities of Zhuhai, Macao and Hong Kong within an hour’s commute of each other. It takes four hours to travel by ferry between Hong Kong on the eastern side of the Delta and Zhuhai on the western bank.

The bridge opened for service in October last year after multiple delays and a large budget overrun that pushed up total costs to more than 127 billion yuan ($18.8 billion). The massive system consists of three cable-stayed bridges, one undersea tunnel and four artificial islands. Three local governments co-funded the project.

Only buses, taxis and private vehicles with special permits are allowed to use the crossing. Official data showed that more than 1.5 million car trips were made over the bridge as of Oct. 23 this year, with daily vehicle traffic reaching as high as 7,106.

Prosecutors said the defendants since 2013 changed dates in computer systems to fabricate compression tests on concrete bricks and used metal piles to subtitle test samples to inflate their workload and cover up mistakes. Technicians at the Civil Engineering and Development Department signed off on relevant parts of the project based on their reports.

The bridge is designed to last for at least 120 years. In more than a year of operation, it recorded some minor engineering issues including 91 millimeters of sinkage in a portion of an artificial island near the Hong Kong entrance that was detected earlier this month. The Hong Kong Highways Department said the sinkage is a problem normal to reclamation land and the scale was within a reasonable range.