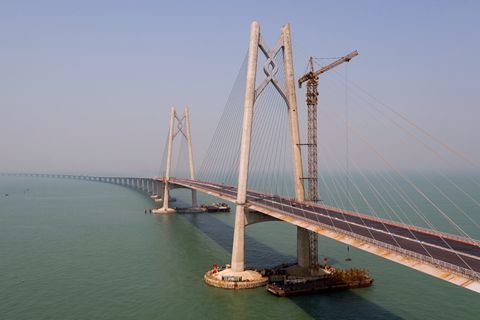 The Hong Kong-Zhuhai-Macau bridge runs for 55 kilometers (34 miles) and is designed to put the three cities within an hour commute of each other. Photo: Visual China

The cost overruns will be shared by the governments of Hong Kong, Macau and Guangdong, based on previously agreed-upon portions.

The 55-kilometer (34 miles) bridge is part of a broader push by the mainland government to integrate the Pearl River Delta region. The bridge will put the three cities of Zhuhai, Macau and Hong Kong within an hour’s commute of each other. It currently takes four hours to travel by ferry between Hong Kong on the eastern side of the Delta and Zhuhai on the western bank.

Under the original budget plan, the three local governments were to provide a combined 42% of the total construction costs while the remaining part is being funded by bank loans. The Guangdong provincial government, which oversees Zhuhai, covers 44.5% of the government part of costs, while Hong Kong and Macau authorities provide 42.9% and 12.6% of the costs, respectively.

The budget overrun will cause an extra 4.6 billion yuan for the governments, including 2 billion yuan to be paid by Hong Kong, according to the city’s transport and housing department. The department said it would ask the legislature for additional funding.

The Macau authority said on Tuesday that its share would be 590 million yuan for the extra costs.

Construction of the bridge, including a bridge and an undersea tunnel, started in December 2009. The Hong Kong department said in late November that it expects the construction of main structures to be completed by the end of this year. It is unclear when the bridge will actually open.

The project has experienced a series of delays, including earlier budget overruns and a corruption investigation.

Earlier this month, the project was in the spotlight after the Guangdong government proposed to charge private cars 150 yuan (nearly $23) to use the main 29.6-kilometer link between Macau and Lantau Island in Hong Kong. The proposal sparked heated debate, as many people suggested use of the bridge should be free.

Nevertheless, only a limited number of private cars will be allowed to use the bridge because it will require special cross-border license plates.

The Guangdong authorities will hold a public hearing later this month with representatives from the three cities to discuss the toll. A final decision is expected next year.