What's the Cost of a Ride on the World's Longest Bridge Over Water? 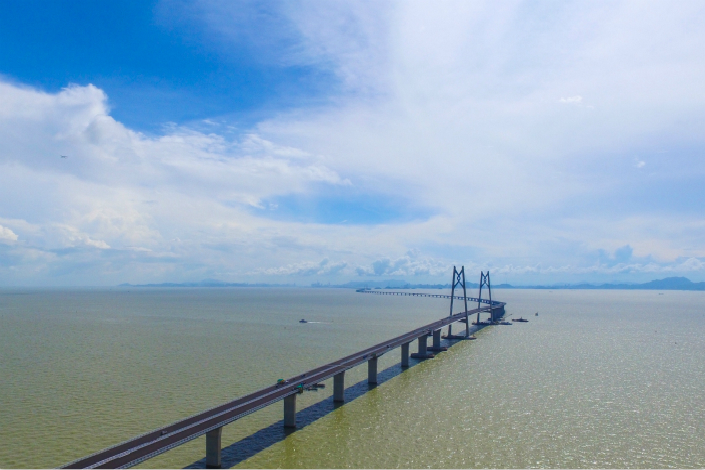 The operating costs of the bridge have been estimated at 2.2 billion yuan ($332 million) annually, and an average of 20.72 million trips is expected to be made across the bridge each year, according to the Guangdong Development Reform Commission. Photo: Visual China

Guangdong’s provincial government has released plans for toll charges to use the Hong Kong-Zhuhai-Macau bridge, a $17 billion project linking the Pearl River Delta economic hub that involved the construction of the world’s longest bridge over water and an undersea tunnel.

The authorities have put forward two proposals that are broadly similar and a public hearing will be held later this month involving representatives from all three cities before a final decision is released next year. No official date has been released for the opening of the bridge while the whole project won’t be completed until 2020, after years of setbacks including budget overruns, delays and a corruption investigation.

Although the project is being paid for by Hong Kong, Macau and Guangdong, the provincial government is the authority that will decide on the fees for using the bridge and the toll stations will be located on mainland China. The Guangdong Development and Reform Commission on Wednesday released two broadly similar plans that will charge drivers of private cars 150 yuan ($23) to use the main 29.6 kilometer link between Macau and Lantau Island in Hong Kong, which includes a 6.7 kilometer undersea tunnel.

Shuttle buses will have to pay 450 yuan, while container trucks will be charged 115 yuan and goods vehicles 60 yuan, according to the proposals. The only difference between the two proposals is the fee for cross-border buses — with one option recommending 450 yuan and the other 200 yuan.

The operating costs of the bridge have been estimated at 2.2 billion yuan annually, and an average of 20.72 million trips is expected to be made across the bridge each year, according to the Guangdong Development Reform Commission.

Work on the project, which runs to a total length of 55 kilometers including link roads at both ends of the bridge, began in 2011 as part of a broader push by the mainland government to integrate the Pearl River Delta region. It aims to put the three cities of Zhuhai, Macau and Hong Kong within an hour’s commute of each other — it currently takes four hours to travel by ferry between Hong Kong on the eastern side of the Delta and Zhuhai on the western bank.

Meanwhile, the authorities are putting the finishing touches to the high-speed Guangzhou-Shenzhen-Hong Kong Express Rail Link, which is expected to cut trips between Hong Kong and Guangzhou to under 50 minutes from the current two hours.