Opinion: Only Real Diplomacy Can Save the U.S. and China From a Cold War 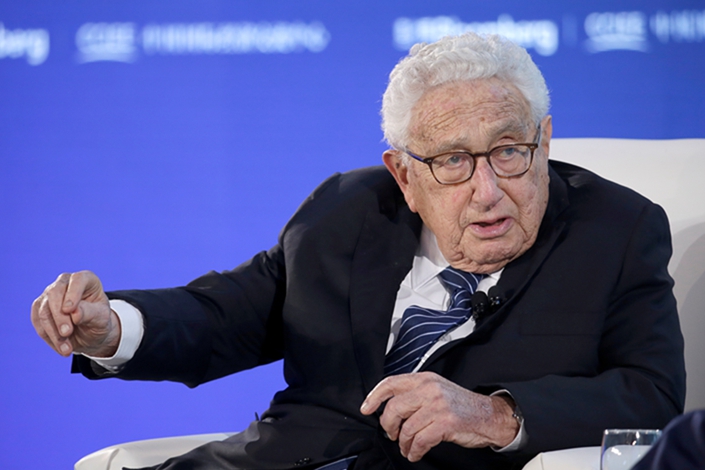 Last week, former U.S. Secretary of State Henry Kissinger warned at a Bloomberg New Economy Forum in Beijing that the U.S. and China now were in the “foothills of a Cold War,” and the conflict could be worse than World War I if left to run unconstrained.

The current status of the countries’ relationship does risk reaching a point of unconstrained conflict if the fundamentals and communication channels in U.S.-China diplomacy are not in place for the two sides to talk and listen and come to a consensus or compromise.

Before U.S. President Donald Trump took office in 2017, there had been a long-standing consensus among Chinese and American diplomats that the economic relationship was the stabilizing force for the world’s two largest economies, which had grown interdependent in the global supply chain.

However, since Trump began a bitter trade war with China in 2018, bilateral economic relations have sank to a level not seen since China joined the World Trade Organization in 2001. Professional diplomats from both sides then shifted their hopes that military relations would play a stabilizing role.

Even personnel exchanges have suffered due to U.S. visa restrictions on Chinese students and scholars. Many Chinese students who want to stay in the U.S. — in their pursuit of the American Dream — have had to leave because of the tightened work visa policies under the current administration.

So in the world’s most consequential major-power relationship, if economic relations, military relations and personnel exchanges cannot play the role of a stabilizing force, real diplomacy and career diplomats are all that we can rely on to avoid miscalculation and further escalation.

Susan Thornton, a former senior diplomat for Asia at the U.S. State Department, doubted that Washington and Beijing communicated enough. After the near-miss between the Chinese and American warships in the South China Sea was made public, Thornton commented in the press that: “I’m not confident that we have adequate communication mechanisms in place to prevent escalation,” she said. “We must be extra careful not to have a mishap like EP-3 in the current environment.”

She was referring to the 2001 collision of a U.S. Navy EP-3E Aries II spy plane, on a routine surveillance mission, with a Chinese PLA Navy J-8 interceptor fighter jet over the South China Sea near the Chinese coast.

Li Kexin, the deputy mission chief and minister at the Chinese Embassy in the U.S., also called for “quality communication.” He said in a speech at a think tank event Thursday in Washington that it has been troubling to see that the real diplomats in the U.S. administration are not handling its relationship with China as much anymore. “Rather, law enforcement and intelligence, some self-claimed ‘China hands’ and fake diplomats with (a) politician’s mindset and ambitions are playing a dominant role.”

There are existing mechanisms in place for the two sides to talk. The question is whether Washington and Beijing will use them in the current hostile political environment.

Under the George W. Bush administration, the U.S. and China established the Strategic Economic Dialogue (SED) in 2006 to discuss topics related to economic relations. The format was such that top economic officials of both countries — usually co-hosted by the U.S. treasury secretary and the Chinese vice premier in charge of economic policy — would meet twice a year at rotating locations in both countries.

The mechanism was later expanded to the Strategic and Economic Dialogue (S&ED) under the Barack Obama administration, giving a bigger role to the State Department. The expanded dialogue had involved as many as 400 to 500 participants, covering all areas of cooperation.

In the Obama era, U.S.-China relations also had difficulties, but overall it was manageable. It was exactly because the two sides, especially career diplomats, kept communicating to come to a consensus and compromise — despite criticisms that the S&ED was bureaucratic and relatively less result-oriented.

After the Trump era began, the S&ED mechanism got heavily scaled back to four senior-level dialogues to discuss economic issues, security and diplomacy, cybersecurity and law enforcement and personnel exchanges. With the exception of the Comprehensive Economic Dialogue, which currently operates in the form of negotiations aiming for a phase one trade deal, the dialogues appear to have been suspended this year.

In Beijing, Kissinger was absolutely right that the current trade negotiations would provide a chance to the U.S. and China to get their relations back on track. “Everybody knows that trade negotiations, which I hope will succeed and whose success I support, can only be a small beginning to a political discussion that I hope will take place.”