By Yang Rui and Ren Qiuyu 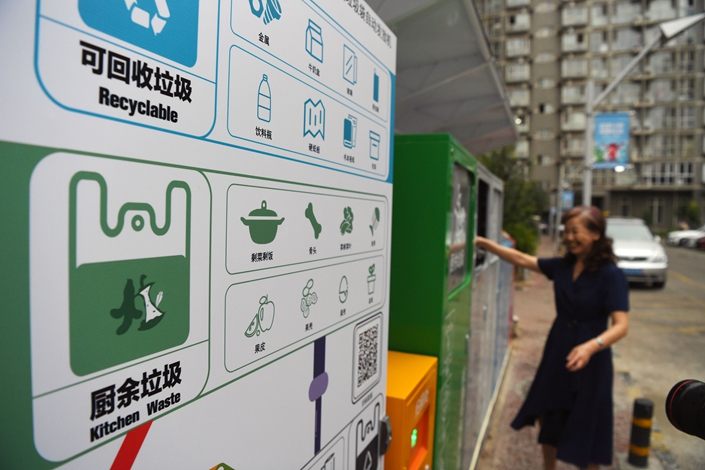 A grinning lady deposits trash into a garbage sorting station at a residential development in Beijing on July 5. Photo VCG

Household waste sorting regulations will come into effect in China’s capital on May 1 next year, the Beijing government announced at a press conference on Wednesday.

The announcement comes as landfills around the country are filling up faster than planned. China aims for 46 cities to have revamped garbage-sorting systems by the end of next year and for the cities to increase their recycling rates to at least 35%. In June, Shanghai rolled out its new waste classification guidelines, and Beijing is now officially set to follow suit next year.

The new regulations stipulate that household waste must be sorted into separate collection containers for kitchen waste, recyclable waste, hazardous waste and other waste. The rules, which were passed at a Wednesday meeting of the Standing Committee of the Beijing Municipal People’s Congress, the municipal legislature, simplified the classifications in an attempt to ensure ease of use.

Chang Jiwen, deputy director of the Institute for Resources and Environment at the Development Research Center of the State Council, told Caixin that enforcement of the guidelines had been postponed from March until May to ensure a smooth transition. “After all, garbage sorting is a long-term process,” he said. Chang also said that the regulations would increase public awareness.

Under the regulations, the main bodies responsible for sorting domestic waste are individuals and work units. The governments of individual districts must organize collection.

In addition to sorting household waste, the city is banning supermarkets, shopping malls, and other markets from offering customers super-thin plastic bags, and violators will face a 10,000 yuan ($1,420) penalty. Restaurants and food delivery platforms will no longer offer disposable items unless requested, the regulations say.

Work units that produce domestic waste — such as government offices — are also encouraged to promote paperless offices, increase the proportion of recycled paper they use, and stop using disposable cups. Express delivery businesses will be required to use electronic receipts and environmentally friendly packaging materials. Such enterprises are also encouraged to recycle packaging materials.

The revised regulations also lay out punishments for individuals failing to properly sort their garbage, which range from a written warning to a 200 yuan fine. Work units may be fined between 1,000 yuan and 50,000 yuan for violations.

Though garbage sorting was introduced in some major cities two decades ago, surveys have shown that few people are aware of how to identify different kinds of trash, let alone sort it. A survey conducted by the Vanke Foundation and data consultancy Dataway in 2018 found that nearly three-quarters of urban residents in 17 major cities were unable to correctly identify how to sort trash.