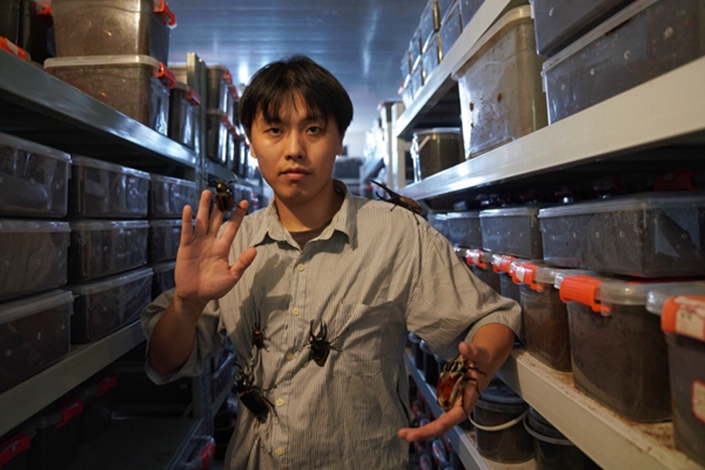 Wang Jieren in his insect house. He rents these bungalows in Haining, Zhejiang province, to raise the beetles. Photo: Caixin

In a yard on the outskirts of the city of Haining in East China’s Zhejiang province, there are three bungalows filled with box-lined shelves. Inside the boxes are beetles at different stages of growth. On a quiet night, the adults can be heard crawling around and rattling their boxes, but the majority of the beetles are still just quiet, white worms squirming in the soil. It will take six months to four years for the different species of beetles to emerge.

According to a 2018 white paper on China’s pet industry, there are 73.55 million pet owners in the country, 14.3 million pet reptiles and 12.7 million pet rodents. In addition to snakes, lizards, turtles, and the usual suspects, rarer creatures such as miniature hedgehogs, raccoons, alpacas, and sloths that have also entered into human homes in recent years.

In 2017, Wang gave up his job in the leather business to devote himself to breeding beetles, some of which he sells. In order to provide the insects with the right conditions, he spends more than 1,000 yuan ($142) on air conditioning every month. One summer when there was a power outage, he and his partner ran to buy bags of ice to cool the boxes down, but hundreds of adult beetles still died due to the high temperatures.

Like Wang’s bungalows, Ai Feng’s Guangzhou home is filled with pets. Boxes of all sizes fill both sides of his living room, stacked taller than him. “Birds, turtles, snakes, fish, spiders, scorpions, centipedes, lizards, chipmunks,” he said. Ten kinds of pets live in this small space.

Ai came to Guangzhou in 2010 to study, and followed a teacher’s recommendation to explore the famed Huadiwan pet and flower market. Back then, lax supervision of the market allowed for contraband animals such as Burmese pythons, green iguanas, and tortoises to be sold at the market. This is where Ai bought his first snake, a green snake, which he secretly put in his bag and brought to class with him. Since then, Ai’s interest in snakes has become an obsession. He one day hopes to create a snake variety of his own through artificial breeding.

Although the popularity of pet snakes is increasing, many people still hold a deep-rooted fear of the slithery reptiles. But Ai believes snakes have emotions that are merely expressed differently. He once raised a king cobra that loved to sleep next to him. “When a snake is familiar with your smell and does not see you as a threat, it will not hurt you and may ignore you. This is its way of taking you in as family,” Ai said.

While there are devoted exotic pet enthusiasts like Wang and Ai, many others do not realize the responsibility that comes with such animals. These kinds of owners are less likely to invest the time and money into a sick pet than owners of cats and dogs, for example. Some don’t dare send their pet for medical treatment if the pet is illegal.

According to a February report from the organization World Animal Protection, 47% of first-time buyers of exotic pets spend little time studying the animals they buy, knowing neither the origin of the pet nor the environment it needs.

The report also found that the global exotic pet trade involves more than 500 kinds of birds and 500 kinds of reptiles. In some cases, the mortality rate after capture is as high as 90%, which shows how increasing demand for unique pets could pose a threat to a species’ population.

China’s regulation of the exotic pet market has gradually increased. Pets that have been kept for many years suddenly appear on the conservation list, and debate over the ethics of keeping such pets continues.