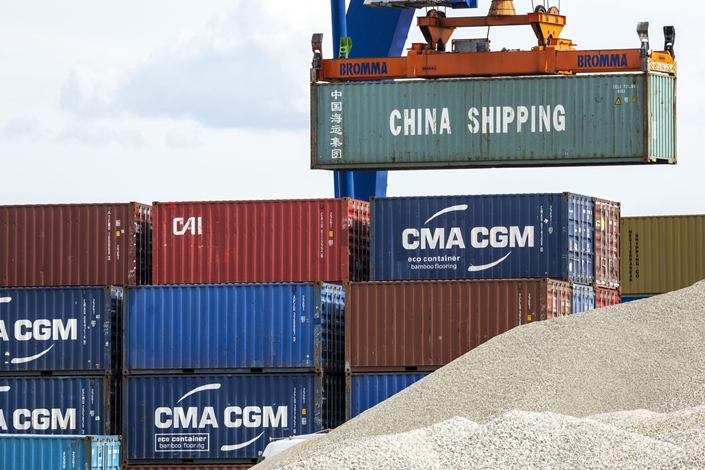 U.S. trade with China continued to decline in October as imports fell to a fresh three-year low. Photo: VCG

(Bloomberg) — U.S. trade with China extended its slide in October as goods imports from the nation fell to a fresh three-year low amid prolonged talks on a trade deal between the two largest economies.

Merchandise imports from China declined 4.8% from September to $35.3 billion while exports tumbled 17% to $7.49 billion, the least in almost a year, Commerce Department data showed Thursday. The gap narrowed to a seasonally adjusted $27.8 billion, a seven-month low.

The overall U.S. deficit in goods and services trade narrowed to $47.2 billion in October, less than the median estimate of $48.5 billion by economists in a Bloomberg survey. The U.S. typically runs a services surplus and a merchandise deficit, a shortfall that U.S. President Donald Trump has assailed as unfair.

American and Chinese negotiators have signaled that they may be drawing closer to agreeing on phase one of a broader accord, though Trump has said that he wouldn’t mind if it takes until after the 2020 election and that a threatened Dec. 15 tariff increase will proceed if the talks fail to yield a deal he likes.

The report showed exports and imports both dropped and gave a hint of the impact of trade on fourth-quarter gross domestic product. While net exports have weighed on growth for the past two quarters, a sustained pullback in imports could help reverse that trend. Some forecasters raised GDP projections last week after the advance trade report showed a narrower goods gap.

A separate report from the Labor Department Thursday showed filings for U.S. unemployment benefits fell last week to a seven-month low of 203,000, below all estimates in Bloomberg’s survey of economists.

Fluctuating trade policy and the surrounding uncertainty have depressed overall trade with China this year. In the first 10 months of 2019, merchandise imports from China were down 14.4% and exports to China dropped 13.6%. The year-to-date U.S. goods deficit with China narrowed to a seasonally adjusted $294.2 billion from the same 10 months of 2018, the report showed.

Overall U.S. exports shrank 0.2% to $207.1 billion, with soybean shipments plunging 42% and with declines in trucks and aircraft engines. Imports dropped 1.7% to $254.3 billion on decreases in consumer goods, autos and crude oil.

Inflation-adjusted petroleum exports rose to a record $23.9 billion, narrowing the real trade gap for petroleum to $4.1 billion. In nominal terms, the surplus for the category jumped to $780 million, further boosting America’s new status as a net exporter.

While trade with China has lagged, goods imports from the European Union rose to a record, and purchases from Russia hit a five-year high on an unadjusted basis.