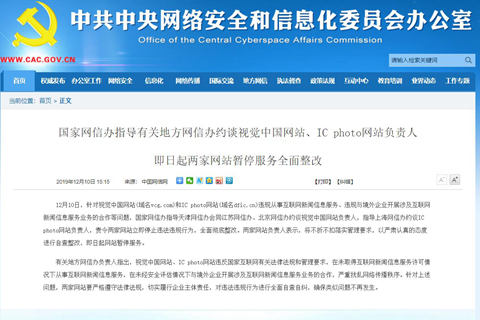 The statement referred to a 2017 law requiring all news outlets ranging from websites to public social media accounts to obtain government permits to disseminate information.

Earlier this year, VCG was under fire for trying to claim copyright to the world’s first photo of a black hole. In April, Chinese internet users discovered the company appeared to also claim rights to images of China’s national flag, prompting a 300,000 yuan ($42,618) fine from regulators and a similar shutdown and internal investigation.

The photo provider, China’s largest, is the sole distributor of Getty Images' library in the country. The company owns the popular photo sharing website 500px, and an affiliate acquired the image licensing business of Bill Gates’s Corbis Images.