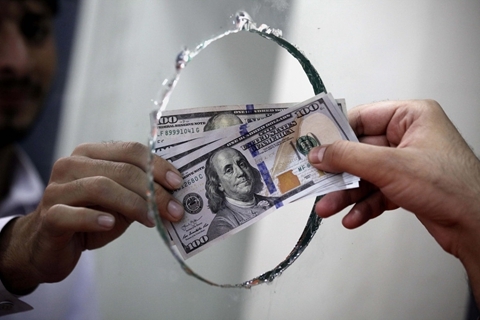 Photo: Most of Tewoo Group’s dollar bond investors chose to sell back their bonds at deep discounts. Photo: IC Photo

“A long delay means many hitches, so investors want to run while they still can,” an investor close to Tewoo Group told Caixin.

Tewoo Group, wholly owned by the Tianjin government, is one of China’s top commodity traders and has been a Fortune Global 500 company since 2012. Like many government-backed commodities traders, Tewoo took advantage of easy access to bank loans to provide financing for steel buyers or steelmakers, earning commissions on the deals.

This business model plunged Tewoo into debt trouble after Bohai Steel Group Co. Ltd., one of the steelmakers with which it had close business ties, fell into a debt crisis and collapsed. The company accumulated 256.5 billion yuan of total liabilities by the end of 2018, including $2.05 billion of offshore debt, according to people close to the Tianjin government.

Tewoo’s debt restructuring plan came before the Dec. 16 due date of a $300 million bond with a coupon rate of 4.5%, one of four notes covered by the plan. The bondholders can choose either to sell the bonds back at a discount price of $667.28 for a face amount of $1,000, or swap the bonds to new zero-interest bonds due in 2024, according to the plan disclosed by Tewoo.

The discount on $450 million of perpetual bonds with a coupon rate of 5.8% is even deeper at 64%. Investors can also choose to swap the bond for new debt due 2039 at a coupon rate of 1.6%. About 40% of holders of the perpetual bond chose the swap option because the sellback price is too low and some domestic institutional investors want to wait and see, some investors said.

Among the total $1.25 billion of bonds, only about $100 million were swapped for new debt, and $100 million of perpetual bonds were swapped, meaning the new bonds will have very limited liquidity, investors said.

The issuer of the new bonds is Tianjin State-Owned Capital Investment Management Co., a debt manager set up by the Tianjin government.

Under coordination of the Tianjin government, lenders have been asked to take a series of stabilizing measures for Tewoo, including not suing, withdrawing and cutting loans to the company.

Industrial and Commercial Bank of China Ltd. (ICBC), one of the China’s “big four” state-owned commercial banks and Tewoo’s biggest lender with nearly 20 billion yuan ($2.85 billion) of loan exposure, last month paid nearly $8 million of interest on behalf of Tewoo on a $500 million bond as the bank provided a standby letter of credit ensuring payment would be made if the issuer couldn’t do so.